The Kentucky National Guard and the Kentucky Derby; A Brief History of a Long Partnership 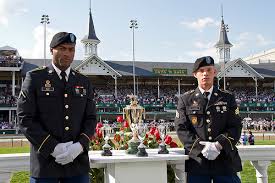 Anyone who has been to the Derby knows what a strong connection we have with our armed forces, particularly the Kentucky National Guard. They are an important part of the ceremony and help ensure the safety of every participant, spectator and horse at the track during Derby weekend.

The partnership between the Derby and the Kentucky National Guard is at least 80 years old. The first official orders placing Kentucky National Guardsmen at the Derby were in 1936, instructing 600 of them to maintain order and prevent riots. The Kentucky State Police were not established until 1948, so the Guardsmen role was critical to the Derby’s security and law enforcement in those early years. And the Guardsmen loved it. During the 1940s so many Guardsmen wanted to work the Derby that the Adjutant General had to limit the number of units that provided support. In 1947, more than 1300 Guardsmen were on hand at the Derby, the largest contingent to date. Now that Kentucky has a police force, the Guardsmen’s contingent may be smaller, but it still play critical role in the ceremony and security of an event as high profile as the Kentucky Derby.

While the National Guardsmen have become an important the Derby tradition, we’ve left our mark on them as well. In 1992, The Kentucky Air National Guard christened its fleet of C-130H aircraft “The Thoroughbred Express” and named each aircraft after a Derby champion.