Since the 50th running of the Kentucky Derby in 1924, Churchill Downs has annually presented a gold trophy to the winning owner of the famed "Run for the Roses®."

History is unclear if a trophy was presented in 1875 to the winner of the first Kentucky Derby, and trophy presentations were sporadically made in following years. Finally, in 1924, legendary Churchill Downs President Matt Winn commissioned that a standard design be developed for the "Golden Anniversary" of the Derby. 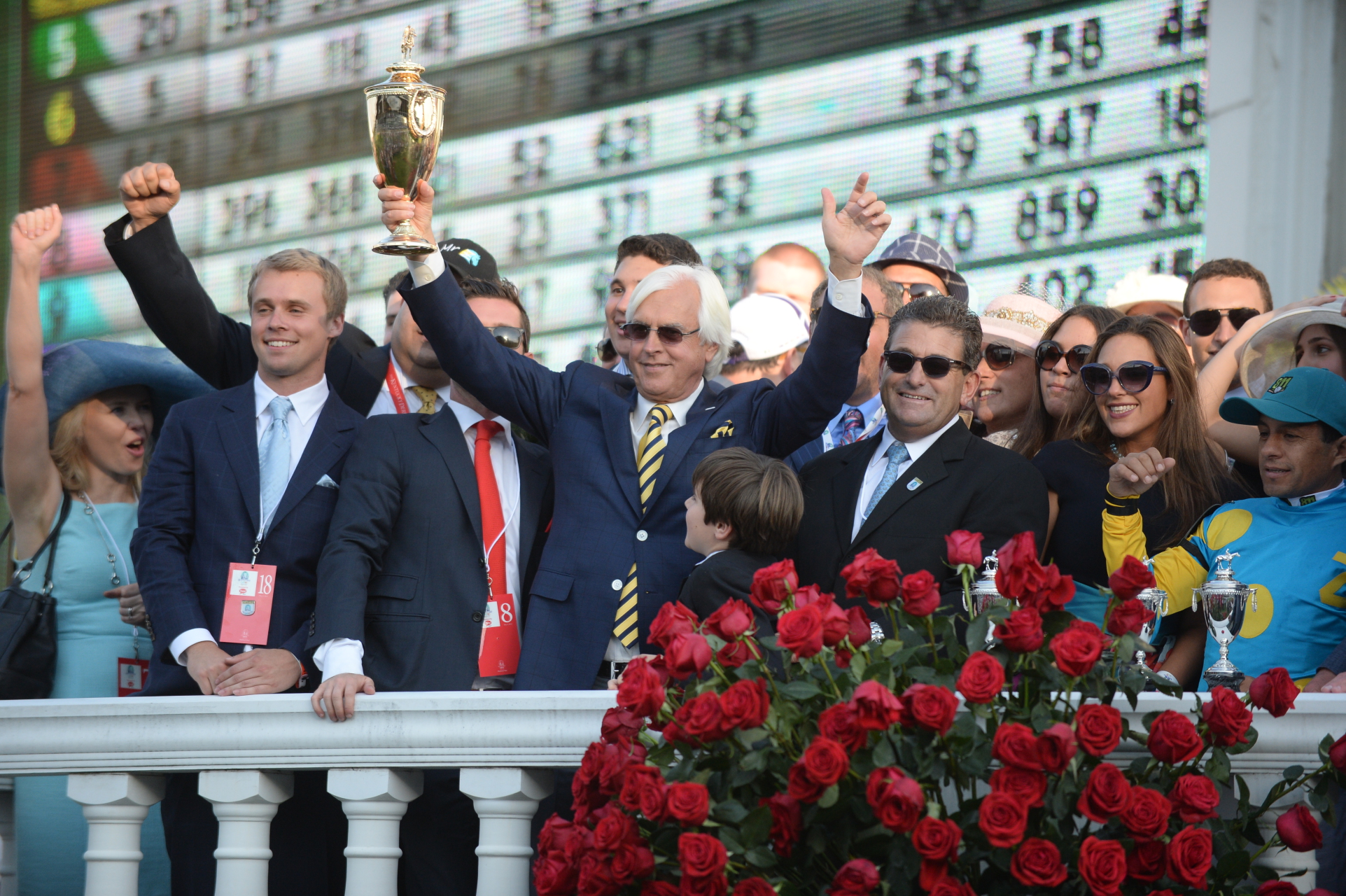 Outside of the jeweled embellishments that were added to note special Derby anniversaries in 1949 (75th), 1974 (100th), and 1999 (125th), only one change has been made to the original design. For the 125th Kentucky Derby in 1999, Churchill Downs officials decided to defer to racing lore and change the direction of the decorative horseshoe displayed on the 14-karat gold trophy. The horseshoe, fashioned from 18-karat gold, had pointed downward on each of the trophies since 1924. To commemorate Derby 125 the change was made and the horseshoe was turned 180 degrees so that its ends pointed up. The trophy now annually incorporates the horseshoe with the ends pointing up. Racing superstition decrees that if the horseshoe is turned down all the luck will run out.

Since 1975 the trophy has been created by New England Sterling located in North Attleboro, MA. The trophy, which is topped by an 18-karat gold horse and rider, includes horseshoe shaped handles, is 22 inches tall and weighs 56 ounces, excluding its jade base. The entire trophy is handcrafted with the exception of the horse and rider that are both cast from a mold.

To complete the trophy by April, craftsmen begin the process during the fall of the previous year and literally work hundreds of hours. The trophy is believed to be the only solid gold trophy that is annually awarded to the winner of a major American sporting event.

From 1875–1929, the Kentucky Derby winner would stand on the racetrack in a circled area drawn out in chalk dust, leading to the phrase "winner's circle." Track officials moved the presentation from the track from 1930-37 and made the winner’s presentation in an area that adjoined the clubhouse. 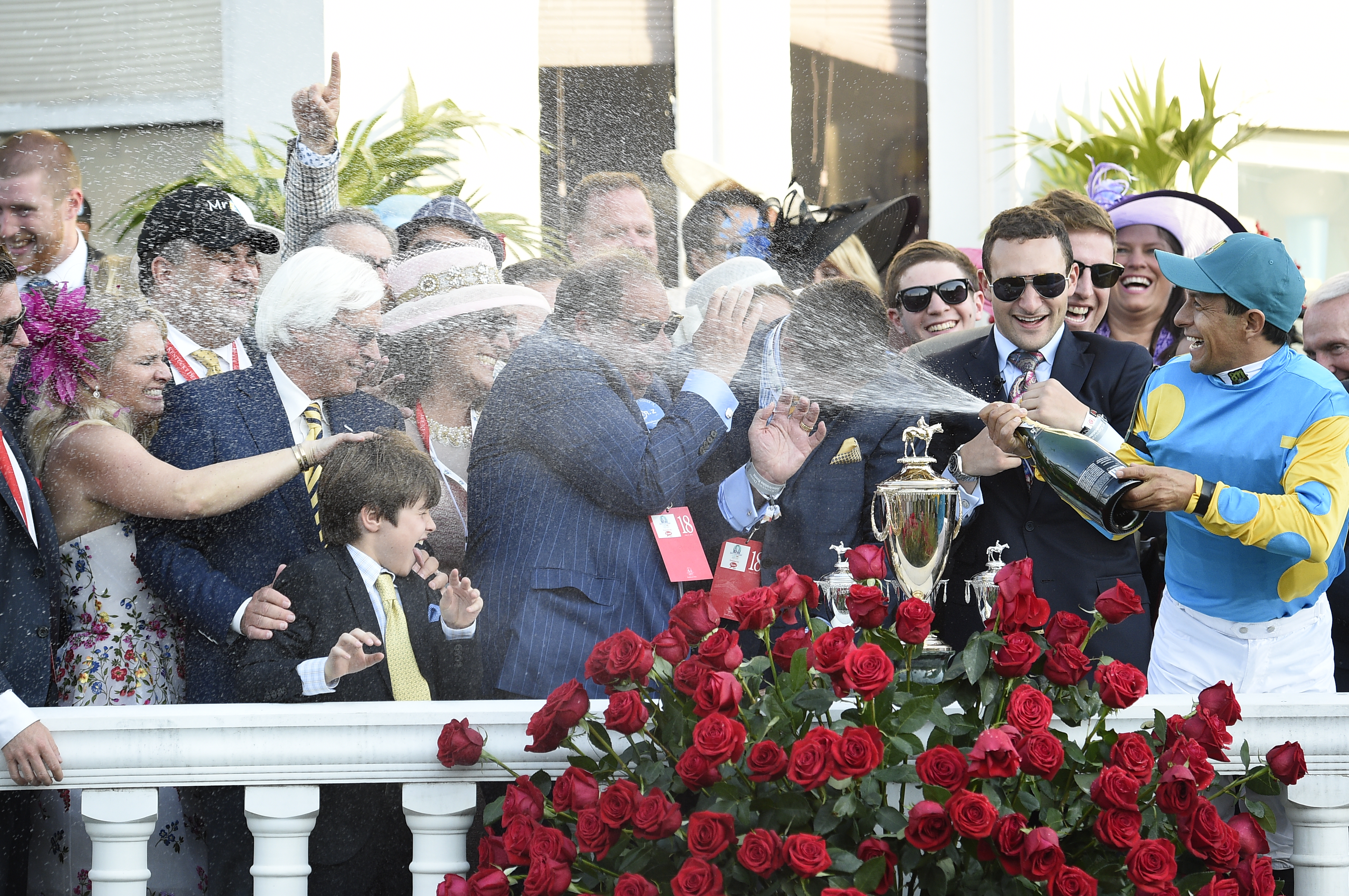 Finally for the 64th running in 1938, a presentation stand, featuring a new electric odds board was constructed. Every Kentucky Derby winner since that time has been led to the infield presentation area to be honored. Since 1944, the winner's circle has included a landscaped horseshoe floral arrangement that the winning horse is led into for photographs.

Although the winner's circle only has been used to honor the Kentucky Derby winner, a limited number of couples have used the site for weddings over the years. And although officials do not encourage the practice, as a last request, the ashes of some involved in the horse racing and breeding industry have discreetly been spread on the hallowed ground.

Sign Up for Latest in Racing News
Thank you to our sponsor
© 2022 Churchill Downs Incorporated. All Rights Reserved.