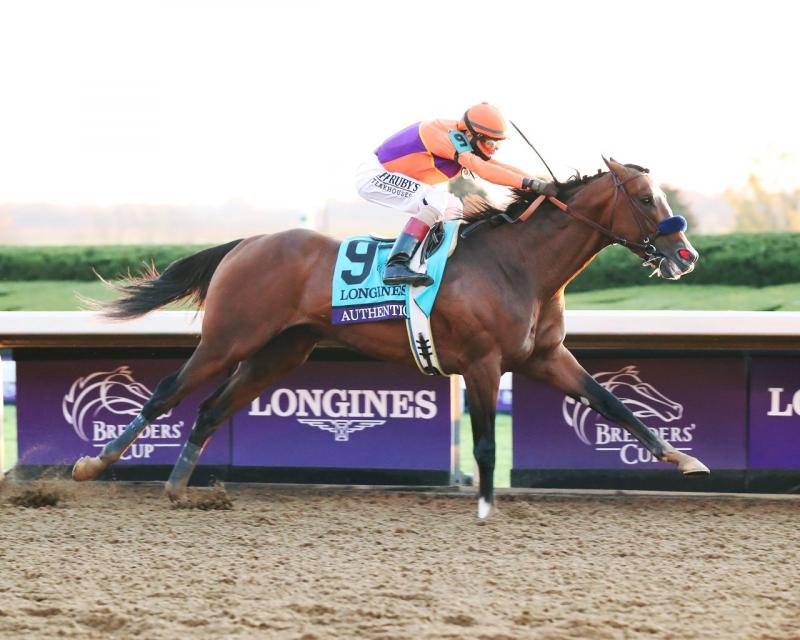 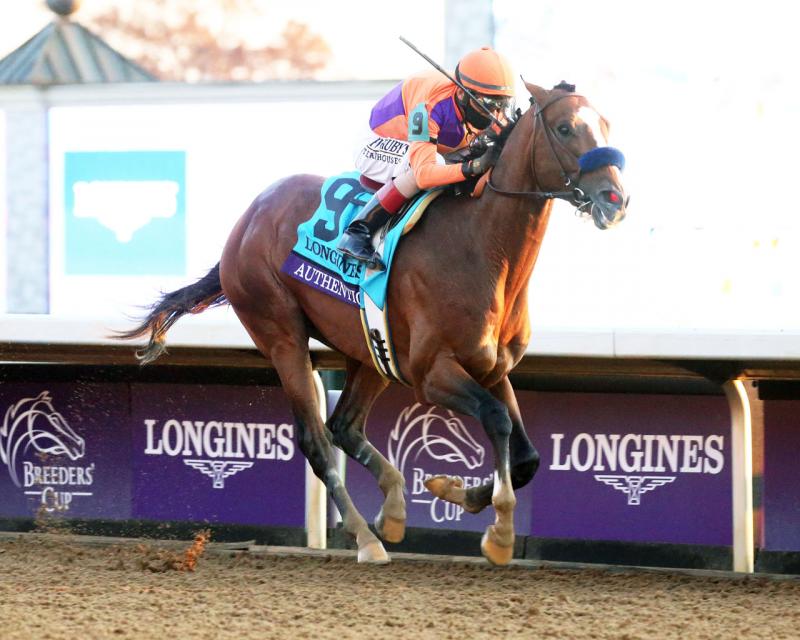 With the setting sun providing a picturesque backdrop, Kentucky Derby (G1) winner Authentic wrapped up a stellar 2020 campaign with an emphatic victory in the $6 million Breeders’ Cup Classic (G1).

The feature race on Breeders’ Cup Saturday at Keeneland, the Classic attracted an elite field worthy of its name. Ten talented horses lined up to contest the 1 1/4-mile race, including champion Maximum Security, Belmont Stakes (G1) winner Tiz the Law, and 2019 Kentucky Derby favorite Improbable. With such a deep group of proven stars in the mix, the Classic was more than just a battle for a lucrative purse—it was a battle for 2020 Horse of the Year honors.

A case could be made for almost any runner in the pre-race handicapping. But in the end, no one could keep pace with the blinding speed of Authentic, who delivered trainer Bob Baffert a record-extending fourth victory in the Classic.

Guided to victory by Hall of Fame jockey Johnny Velazquez, Authentic was quick into stride, racing boldly to the front with Maximum Security and Tiz the Law in close pursuit. Stablemate Improbable—highly regarded by bettors after winning three consecutive Grade 1 races—was caught wide while racing a few lengths off the pace.

The positions remained relatively unchanged until the far turn, when Maximum Security and Tiz the Law began to weaken. Improbable promptly seized the moment, unleashing a challenge on the far outside to drive the race for Horse of the Year honors into high gear.
But Authentic wasn’t about to concede, instead displaying the same stubborn tenacity that produced his gate-to-wire victory in the Kentucky Derby. Improbable tried hard, but couldn’t match strides with his younger stablemate. In the final furlong, Authentic gradually widened his advantage, powering across the finish line 2 1/4 lengths in front.
“It’s incredible,” said Velazquez, who secured his first victory in the Classic. “Thank God and the whole team. The older I get the more emotional I get. It worked out perfect. Bob said to take him to the lead so he doesn’t wander so much and keep his mind on running. It worked out. He did everything I wanted him to do.”
Authentic stopped the clock in 1:59.19, eclipsing the track record of 2:00.07 posted by Baffert’s Triple Crown winner American Pharoah in the 2015 Breeders’ Cup Classic. Improbable finished second-best by a length over longshot Global Campaign, while Tacitus, Maximum Security, Tiz the Law, Title Ready, By My Standards, Tom’s d’Etat, and Higher Power trailed the field.

Authentic was an early star on the Road to the Kentucky Derby, recording blowout wins in the Sham (G3) and San Felipe (G2) during the winter at Santa Anita. But following the postponement of the Kentucky Derby due to COVID-19, Baffert elected to give Authentic time off, a strategy that has worked wonders for the improving 3-year-old. In addition to his triumph in the “Run for the Roses,” Authentic boasts a victory in the Haskell (G1) and runner-up efforts in the Preakness (G1) and Santa Anita Derby (G1) on his 2020 resume.

In a sense, winning the Classic could be considered icing on the cake for Authentic, who campaigns for the partnership of Spendthrift Farm, MyRaceHorse Stable, Madaket Stables, and Starlight Racing. Yet Authentic victory at Keeneland is arguably more significant than his Triple Crown exploits. Beating elite older rivals on racing’s championship stage has cemented Authentic as North America’s most accomplished racehorse, with champion 3-year-old and Horse of the Year honors sure to follow.
“When I saw him out there, he’s catching up with these older horses,” remarked Baffert, noting the progress Authentic has made with maturity. “That’s what they do at this time of year, what a horse. He’s the real deal.”
Considering only six horses have ever completed the Kentucky Derby/Breeders’ Cup Classic double… yes, Authentic is definitely the real deal.