Banking on the weekend’s best bet

The “Best Bet of the Weekend” will come from Remington Park on Sunday. The $400,000 Springboard Mile drew a competitive field of 11, with many nice prospects among the cast. Trainer Steve Asmussen has five in the field and I will tab one from his quintet to take the top prize home.

BANKIT picked up his first stakes win at Belmont Park in October when displaying a fine turn of foot en route to a daylight score in the state-bred Sleepy Hollow Stakes. The New York-bred son of Central Banker has flashed ability since his debut in June, but it was his last race that really caught my attention.

The $260,000 two-year-old purchase earned a hefty 98 BRIS Speed number second time out with a dominant win at Saratoga and he followed that up with a narrow defeat to a nice one in the Funny Cide Stakes.

Bankit set ambitious splits in the Bertram F. Bongard Stakes and faded to fourth in his next try, but the race could have been a blessing.

In the recent Sleepy Hollow Stakes, Bankit settled nicely off the pace for the first time and the change in tactics was a brilliant one. The April foal cruised into contention on his own accord, then exploded once given his cue at the top of the lane, quickly opening up a sizable edge and offering his foes little chance late.

It is obvious that Bankit must improve from the 88 BRIS Speed figure that he earned last time, but he has posted more substantial numbers in the past and the bay has a right to improve in his second run going one mile.

Bankit comes in fresh with a pair of morning drills at Remington to get acclimated to his surroundings. The Asmussen pupil has the gate presence to be close early if pilot Ricardo Santana Jr. chooses to do so, and he can also sit off the pace and make one run.

I am tabbing Bankit to continue his ascension and to pad my holiday budget. 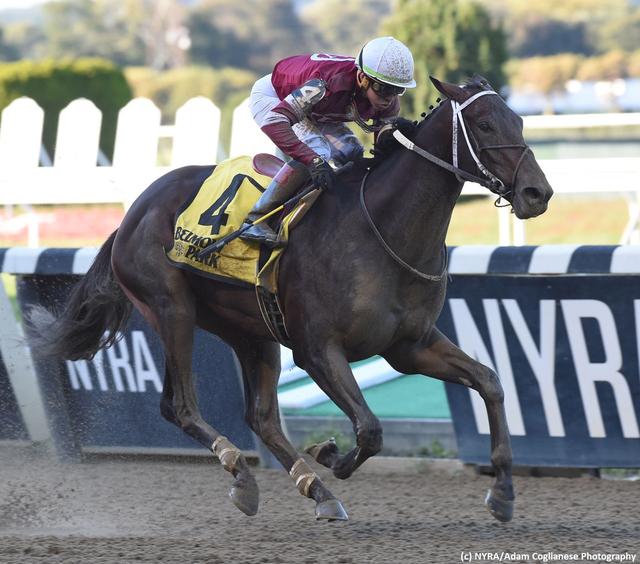