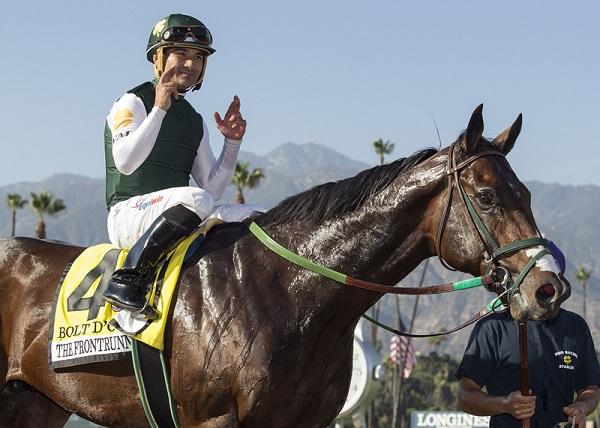 Bolt d’Oro solidified his status as the Breeders’ Cup Juvenile (G1) favorite with an eye-catching 7 ¾-length victory in Saturday’s $301,380 FrontRunner (G1), blistering foes through the stretch of the 1 1/16-mile race at Santa Anita.

He finished fast in the “Win & You’re In” event for the November 4 Juvenile and earned 10 points making his first attempt in a “Road to the Kentucky Derby” qualifier. Trained by Mick Ruis and ridden by Corey Nakatani, Bolt d’Oro was already the early Kentucky Derby favorite at Wynn Las Vegas by virtue of his impressive win in the September 4 Del Mar Juvenile (G1).

The Medaglia d’Oro colt is now perfect from three starts for Ruis Racing LLC and has earned $396,000. Bred in Kentucky by WinStar Farm, the bay colt was purchased for $630,000 as a yearling at the 2016 Fasig-Tipton Saratoga August sale.

Bolt d’Oro completed 1 1/16 miles in 1:43.54, with his final time being nearly three seconds faster than Moonshine Memories, who established herself as the likely Breeders’ Cup Juvenile Fillies (G1) favorite taking the Chandelier (G1) earlier in the stakes-packed program. And the FrontRunner victor ran nearly a second faster than Breeders’ Cup Distaff (G1)-bound Paradise Woods did winning the Zenyatta (G1).

“I was more impressed when I watched the replay,” Nakatani said. “I really liked the way he did it. He’s confident wherever he is at, he is a special animal. Mick gave me the instructions and the horse did the rest. I’m looking forward to the Breeders’ Cup as well as the first Saturday in May in Kentucky.”

“This was pretty cool,” Ruis said. “We thought he was going to run a good race. We thought he could run two turns, and now we know he can…Our goal was this race and the Breeders’ Cup, and then give him a chance to grow up. Hopefully what dreams are made of is what this guy might be able to get us to. That’s why we tried to stay on course and not get too excited about the Grade 1 at Del Mar. That was all on his natural talent.”

Bolt d’Oro was an overwhelming 4-5 favorite among nine rivals.

Solomini, a Bob Baffert-trained son of Curlin making his second start after breaking his maiden at Del Mar, was carried wide into the first turn and offered a solid rally from just off the pace to be a clear second as the 3-1 third choice, 2 ½ lengths better than pacesetter and 72-1 longshot Take the One O One in third. It was another 3 ½ lengths back to Ayacara in fourth. Zatter, the 3-1 second choice after a second in the Del Mar Futurity, wound up fifth. 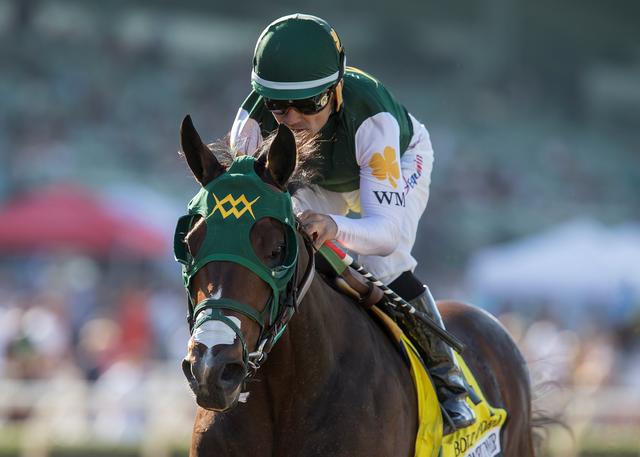