Four Japanese sophomores have been nominated to the 2019 Triple Crown , and two of them have already scored points on the Japan Road to the Kentucky Derby – Derma Louvre and Romantico. The other nominees are Master Fencer, two-for-two since switching to dirt, and Zeruch, a half-brother to 2016 Triple Crown participant Lani.

Derma Louvre and Master Fencer are on course to clash in Sunday’s Hyacinth, the next scoring race. Both are on the preliminary entry list for the metric mile test at Tokyo, worth points on a 30-12-6-3 scale on the Japan leaderboard.

Hiroyuki Asanuma’s Derma Louvre brings the best resume of the nominees. A hard-charging second in the most recent scoring race, the December 19 Zen-Nippon Nisai Yushun at Kawasaki, he earned 8 points to rank third on the leaderboard. The top two points earners so far, Zen-Nippon winner Nova Lenda (20 points) and Cattleya Sho heroine Make Happy (12 points), were not Triple Crown nominated.

By Pyro, the 2008 Louisiana Derby (G2) and 2009 Forego (G1) winner, Derma Louvre has raced exclusively on dirt. The Hirofumi Toda trainee was fourth in a newcomers’ race at Sapporo before reeling off three straight wins. Derma Louvre broke his maiden by seven lengths at Nakayama, bulled his way through traffic to prevail in a Tokyo allowance, and overcame a wide trip on both turns to dominate the Hyogo Junior Grand Prix at Sonoda. A troubled passage in the Zen-Nippon, however, proved costly as he got going too late to catch the perfect-trip Nova Lenda. Derma Louvre was arguably unlucky to miss by a head, or else he might have been the Japan Road leader.


Nobutaka Tada’s Romantico was likewise compromised en route to his fourth in the opening points race, the November 24 Cattleya Sho. The Empire Maker colt found himself buried on the inside and didn’t see daylight until deep stretch. Finishing with interest to grab fourth, and earn 1 point, he could have gone closer with clear sailing.

Trained by Kazuo Fujisawa, who’s developed such superstars as Taiki Shuttle, Symboli Kris S and Zenno Rob Roy during his prolific career, Romantico is likely capable of improvement. He progressed through his first three starts, culminating in a seven-length maiden score on the Tokyo dirt where he led effortlessly throughout. Romantico has raced just once since the Cattleya Sho, in a January 26 allowance at Chukyo. His tiring eighth that day has the look of a fitness-builder, considering that he weighed in 10 kilograms (22 pounds) heavier than in his prior start.

Katsumi Yoshizawa’s Master Fencer , a son of turf standout Just a Way, logically started out on the grass. After a second and a fourth, however, trainer Koichi Tsunoda switched him to dirt, and he immediately responded. Master Fencer’s surface preference isn’t a total surprise. His half-brother, Top Divo, was a dirt stakes winner, and their dam, Sexy Zamurai, is a Deputy Minister half-sister to Grade 2 winner One Caroline who raced on dirt herself.

In his first dirt attempt at Hanshin December 23, Master Fencer had to be ridden nearly the entire way, but he found plenty to draw off by 3 1/2 lengths. Whether it was a case of benefiting from the experience, or liking the Kyoto track better, he traveled much more readily in his January 14 allowance. Master Fencer rolled past Washington Tesoro (who had been a disappointing 10th in the Cattleya Sho) to continue his ascent.

Shinji Maeda’s homebred Zeruch hopes to follow in the hoofsteps of half-brother Lani, who earned his way into the 2016 Triple Crown by winning the UAE Derby (G2). Only ninth behind Nyquist in the Kentucky Derby, Lani moved forward to take fifth in the Preakness (G1) and saved his best for the final jewel, a third-place effort in the Belmont (G1).

While Zeruch may be a bit behind Lani at this stage of development, their other prominent half-siblings – multiple Grade 3 winner Awardee and six-time stakes queen Amour Briller – excelled as older horses, so there’s still time for him to come around. The four are all by different stallions. Lani is gray like his sire Tapit, and Zeruch is a bay like both parents, Awesome Again and the high-class racemare Heavenly Romance, a daughter of Sunday Silence. Jockey-turned-trainer Mikio Matsunaga, who rode Heavenly Romance, has conditioned her offspring.

Zeruch has made all four starts going about nine furlongs on dirt. Never involved when 13th in his November 10 unveiling at Kyoto, he closed for fifth next time at Chukyo, and broke through at the same track on December 16. His 3 1/2-length decision may have looked better than it actually was, since he picked up the pieces as the whole field was slowing down markedly. Zeruch reinforced that concern when he stepped up into allowance company last time and finished a non-threatening sixth behind fellow Triple Crown nominee Master Fencer.

After Sunday’s Hyacinth, the final stop on the Japan Road to the Kentucky Derby is the March 31 Fukuryu S . at Nakayama. But the Japanese hopefuls can exercise the Dubai option instead. Derma Louvre, Romantico, Master Fencer, and Zeruch are all nominated to the March 30 UAE Derby on Dubai World Cup night, which should feature a couple of the locally based Triple Crown nominees and representation from Europe.

Check out the companion features on the international Kentucky Derby picture: 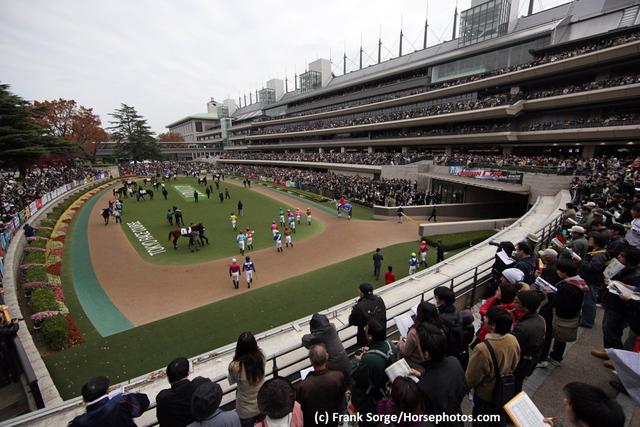