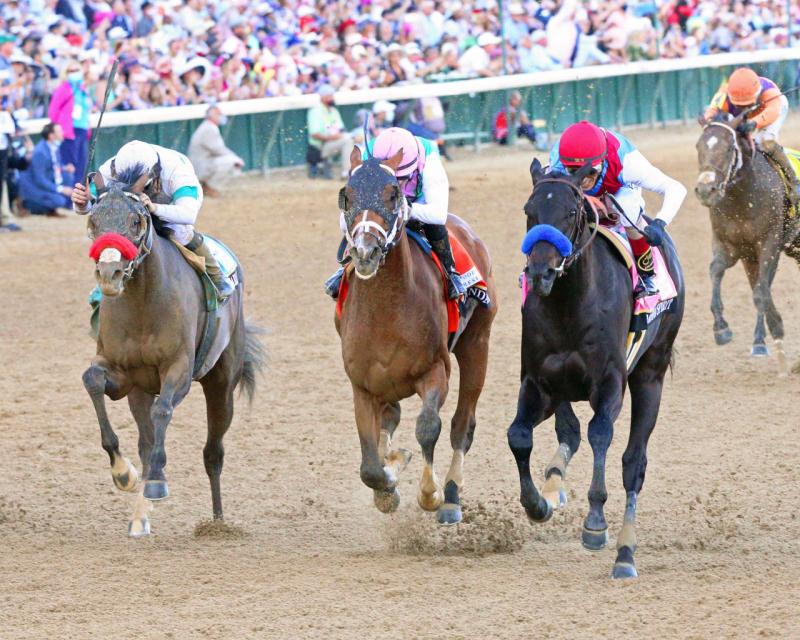 Only two of his Kentucky Derby (G1) rivals are expected to try Medina Spirit again in the May 15 Preakness S. (G1), both also-rans, but several fresh challengers are lining up at Pimlico. Most notable on that list of “new shooters” is fellow Bob Baffert trainee Concert Tour.


Until losing his perfect record in the Arkansas Derby (G1), Concert Tour was a much better-fancied Kentucky Derby contender than Medina Spirit. The Gary and Mary West homebred won his first three starts, including a workmanlike San Vicente (G2) before a smashing victory in the March 13 Rebel (G2) at Oaklawn Park. That made him the 3-10 favorite to follow up in the Arkansas Derby, but Concert Tour failed to deliver in a laboring third.

Although Concert Tour had more than enough points to advance to the Derby, his connections did not want to bring him back, in that stern a test, just three weeks after a lackluster effort. Thus the son of 2007 Derby star Street Sense stayed in the barn as stablemate Medina Spirit fought his way to a record-setting seventh Derby trophy for Baffert.

A rejuvenated Concert Tour has pleased Baffert in his recent training at Churchill Downs, and accordingly received the green light to take on Medina Spirit in the middle jewel. Hall of Famer Mike Smith, who rode Baffert’s 2018 Triple Crown champion Justify, picks up the mount.

Aside from the storyline around intramural bragging rights, their clash has historic ramifications. Baffert is also going for a record number of Preakness wins as a trainer. Currently tied with 19th-century Maryland horseman Robert Wyndham Walden, who sent out seven Preakness winners between 1875 and 1888, Baffert is on the verge of establishing a new mark of eight.

As Medina Spirit looks to restore the prior trend, and prolong his Triple Crown dream, he’ll have to work out the right trip to beat Concert Tour. So far, both Baffert runners have proven most effective on the early lead. Unless one finds a greater range of tactical flexibility, whoever blasts to the front from the gate could have the advantage between the pair. We’ll know more after Monday’s post position draw.

Also likely to take up a forward role is Midnight Bourbon, the Kentucky Derby sixth who didn’t get his preferred trip at all. Further behind than forecast after the start, the Steve Asmussen pupil wasn’t able to settle into his favorite scenario – finding his rhythm at a high cruising speed up front, as he did through a productive winter at Fair Grounds. On the contrary, Midnight Bourbon found himself employing the opposite style of closing, and he made a pretty fair showing of it. Now he gets a rider switch (from Smith) to Irad Ortiz Jr.

The presence of the Baffert duo, possibly prompted by Midnight Bourbon, portends a genuine pace. At least that’s the hope of the other Kentucky Derby participant, Keepmeinmind, a deep closer who rallied from last for seventh at Churchill Downs. Although not near enough to threaten, he was posting his best effort since his juvenile days, judging by his Brisnet Speed ratings.

Trainer Chad Brown’s contenders, Crowded Trade and Risk Taking, would have qualified for the Derby but passed on the roses. Both Klaravich Stables colorbearers were last seen in the Wood Memorial (G2), where Crowded Trade loomed before stalling in third, and 2.35-1 favorite Risk Taking never factored in seventh. While Brown always had Pimlico in mind for Crowded Trade, whom he’s compared to his 2017 Preakness winner Cloud Computing, he just decided to pitch in Risk Taking. Initially, Risk Taking was entered in Saturday’s Peter Pan (G3) at Belmont. Brown had a rethink, believing that the well-bred colt could be sitting on a rebound in the 1 3/16-mile classic. The pace set-up could work in his favor as well.

California shipper Rombauer likewise had the points to make the Derby, but his team opted to focus on the Preakness. Trained by Michael McCarthy, the John and Diane Fradkin homebred earned a free ticket here by capturing the El Camino Real Derby. Rombauer was most recently third in the Blue Grass (G2).

The Triple Crown newcomer from furthest afield is Japan’s France Go de Ina. Twice a winner at about 1 1/8 miles at Hanshin, the Hideyuki Mori trainee was compromised by a slow start when sixth in the March 27 UAE Derby (G2). France Go de Ina raced prominently in both of his wins, but it remains to be seen how he copes with serious American pace. For more, see his International Scouting Report at TwinSpires.com.

Todd Pletcher, just announced as a first-ballot Hall of Famer, is still seeking his first Preakness. Unbridled Honor, runner-up in the Lexington (G3) last out, would be a fittingly named breakthrough if he can step up.

Pletcher’s mentor, Hall of Famer D. Wayne Lukas, has won six runnings of the Preakness. The octogenarian might try for seven with Ram, a son of 2015 Triple Crown sweeper American Pharoah who scored in an allowance on Kentucky Derby Day. His status will be determined Saturday.

Lukas might be invoked Preakness Day regardless of whether he has a runner or not. Twice, he’s been in a similar position to Baffert – pitting a stablemate against his Derby winner in the Preakness. Both times, the Lukas runners had also competed in the Derby. Thunder Gulch’s 1995 Triple Crown bid ended here with a third to stablemate Timber Country, while four years later, 1999 Derby hero Charismatic beat stablemate Cat Thief by a bigger margin in the Preakness.
Baffert’s done that before too. In American Pharoah’s year, stablemate Dortmund regressed to a distant fourth in the Pimlico slop. And in 2020, Thousand Words, who was scratched after flipping over in the Derby paddock, wound up a poor eighth to Swiss Skydiver and Authentic in the Preakness.
But the Medina Spirit versus Concert Tour clash offers more suspense than their Baffert precedents. Concert Tour, the onetime highly regarded Derby hope, squares off against the barn’s underdog-turned-overachiever, Medina Spirit, and that makes for a fascinating dynamic in the Triple Crown’s middle jewel. 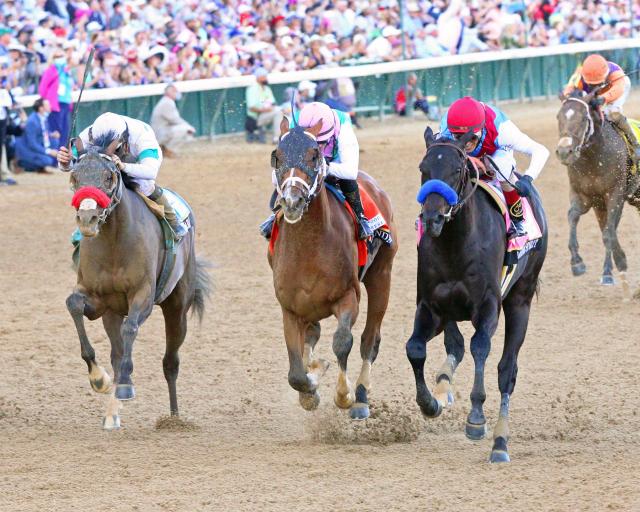