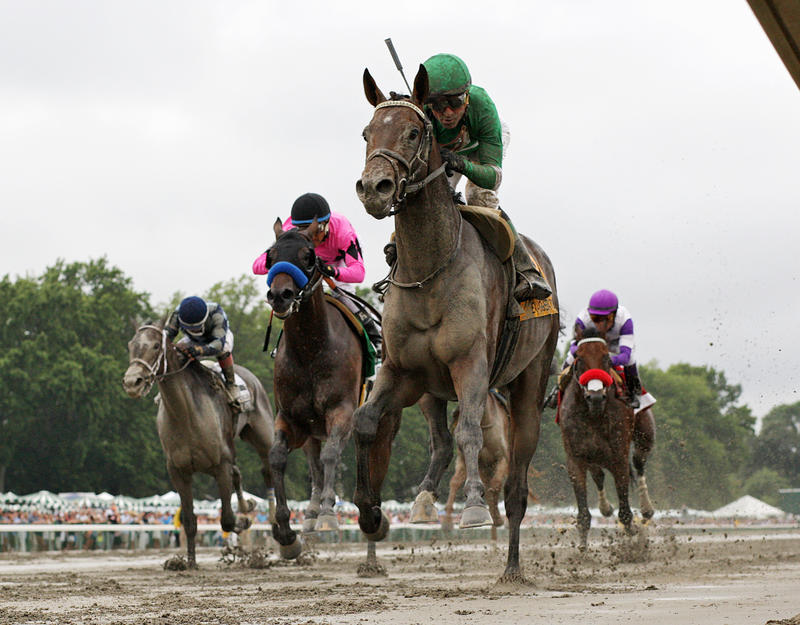 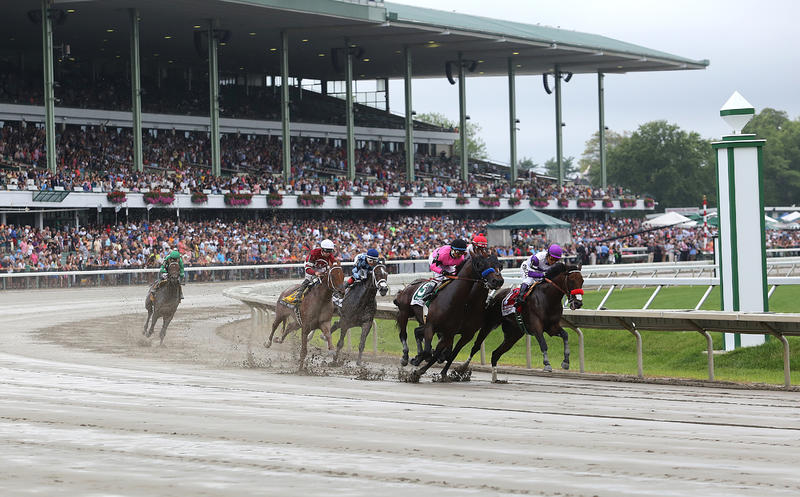 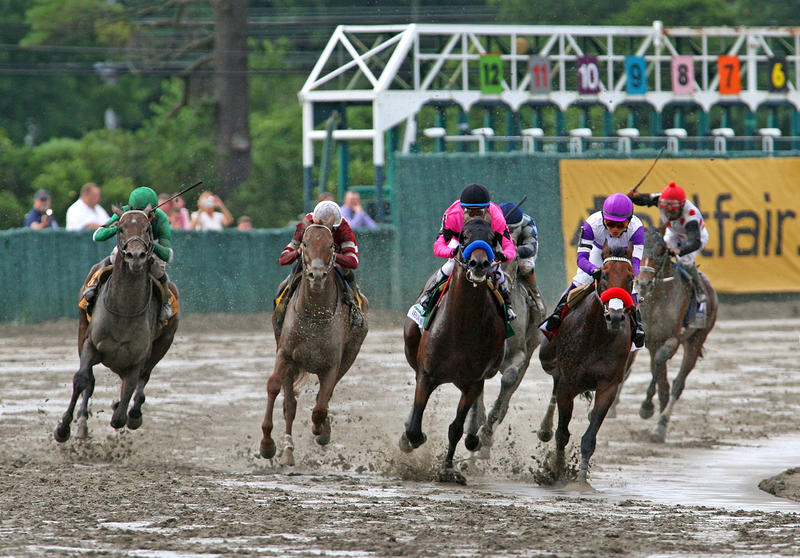 Sunday’s $1,015,000 Haskell Invitational (G1) shaped up as a rematch of the top three from the Kentucky Derby (G1) – Nyquist, Exaggerator, and Gun Runner. But after the rains poured down and Monmouth turned into a sea of slop, it became Preakness (G1) 2.0. Just as in the Preakness, heavily favored Nyquist had his energy sapped by an early speed duel, and slop-loving Exaggerator rallied to a clear victory.

Nyquist hadn’t raced since his tiring third in the Preakness, having spiked a fever that ruled him out of the Belmont (G1). Exaggerator advanced to the third jewel of the Triple Crown, only to throw in the worst race of his life and wind up 11th in the Belmont. Both were seeking a rebound in the Haskell.

Derby third-placer Gun Runner, in contrast, was entering on a high note. Skipping the Preakness and Belmont, he romped in the June 18 Matt Winn (G3) in stakes-record time at Churchill Downs. Could he be riding the wave at just the right time to turn the tables on Nyquist and Exaggerator?

After all, Nyquist was trying to regain his old form after his first career loss and an illness. And aside from his Belmont flop, Exaggerator didn’t work satisfactorily at Saratoga last week. Connections – trainer Keith Desormeaux and his ownership group headed by Big Chief Racing – shelved plans to run in Saturday’s Jim Dandy (G2). He was rerouted to Haskell in hopes he’d care better for Monmouth, and the weather made that the absolute right call.

Unfortunately for Nyquist, he drew the rail in the Haskell, and that led to a regrettable tactical decision to flash speed. The problem was that there was plenty of other early speed signed on. Hence the champion and even-money favorite found himself embroiled in a toxic duel in the slop – echoes of the Preakness – through a wicked opening quarter of :22.78. Unlike the Preakness, jockey Mario Gutierrez at least tried to take a hold and give him a breather, which allowed pace rival American Freedom to gain a narrow lead through fractions of :46.62 and 1:11. But it wasn’t enough.

Nyquist came again along the inside turning for home and regained command. For a few strides, it appeared as though the Derby winner had more in the tank for the stretch. That was an illusion, for he soon became mired in the mud and faded from contention in fourth. Not only was American Freedom moving better and passing him for good, but Exaggerator was gathering momentum on the outside.

Patiently handled by Hall of Famer Kent Desormeaux (the trainer’s brother), Exaggerator had bided his time in last early through those quick fractions. He readily advanced as the field continued down the backstretch, and as in the Preakness, he was sitting pretty on the far turn. By the time he entered the homestretch, Exaggerator looked loaded compared to the leaders, and he skipped past to a 1 1/2-length decision. The son of Hall of Famer Curlin (who won the 2007 Preakness but was only third in the Haskell) completed 1 1/8 miles on the sloppy, sealed track in 1:48.70 and paid $7.20 as the 5-2 second choice.

American Freedom hung tough for second, an all the more commendable effort considering his early battle with Nyquist. Jockey Rafael Bejarano claimed foul against Desormeaux, alleging that Exaggerator interfered with American Freedom by crossing in front of his path. While Exaggerator was quick to angle toward the rail once clear, it was immaterial to American Freedom’s placing. He was never going to hold off Exaggerator anyway, and he didn’t miss a beat after his path was taken. Bejarano simply steered him wider, with no real momentum loss. Thus the stewards disallowed the claim and sensibly let the original order of finish stand.

Trained by Hall of Famer Bob Baffert, the Haskell’s all-time leading trainer, American Freedom is the trademark late-developing type who wasn’t ready for the Triple Crown trail. He didn’t even start racing until April 9, and he’s come a long way in a short time. Look for American Freedom to keep improving.

New Jersey-bred Sunny Ridge, like Exaggerator held up off the early pace, closed gamely to edge Nyquist for third. This was a heartwarming result for his local connections, who deliberately avoided the cauldron of the Kentucky Derby to point for their state’s signature race. Owner/breeder Dennis Drazin and trainer Jason Servis knew Sunny Ridge’s limitations, and didn’t press on to a Derby tilt that would have been beyond him. Sunny Ridge rewarded them on Sunday.

Nyquist’s performance is in part attributable to his trip, but the fact that pace foe American Freedom fared much better is cause for concern. He definitely needs to employ different tactics, resuming the stalking role that had worked so well for him in the Derby. Perhaps his massive efforts earlier in the season have taken their toll, and he needs a longer rest. Yet it’s also possible that Nyquist peaked at two and early on at three. Maybe the best of his rivals have caught up to him developmentally.

Gun Runner was a disappointing fifth, likely confirming the idea that he’s just not happy in the slop. His only other unplaced effort came in a sloppy Kentucky Jockey Club (G2) at Churchill last November.

Conversely, Exaggerator’s affinity for sloppy tracks makes his pro tem leadership of the 3-year-old male division less than straightforward. He’s been blessed by rain for all three of his wins this season, the Santa Anita Derby (G1), Preakness, and now the Haskell. Exaggerator is also effective on fast tracks, as his terrific runner-up efforts to Nyquist in the San Vicente (G2) and Kentucky Derby illustrate. But the slop tilts the playing field in his favor, and to clinch a championship, Exaggerator will probably have to defeat his rivals for the crown on a fast track.

Hopefully sunny conditions will prevail in the August 27 Travers (G1) at Saratoga, where the Haskell principals will clash with those coming out of the local preps at the Spa. Saturday’s Jim Dandy witnessed a huge upset as the 27-1 maiden Laoban, who didn’t have enough points to make the Kentucky Derby field, went wire to wire. Governor Malibu finished second, with Destin (third), Mohaymen (fourth) and Creator (sixth) all underperforming.

Last Friday, the Chad Brown-trained duo of Connect and Gift Box burnished their Travers credentials when fighting out the finish of the Curlin Stakes at Saratoga. It was fitting that Connect ground out the front-running victory, for he’s by race honoree Curlin – just like Exaggerator. And like American Freedom, Connect is a late developer now poised to challenge the establishment who participated in the Triple Crown.

As this past weekend’s results reiterated, the Derby is the culmination of everyone’s dream, but it’s the opening act in the 3-year-old title chase. The final act may be the November 5 Breeders' Cup Classic (G1) at Santa Anita. The Haskell was a "Win and You're In" for the Classic, which provides an inter-generational test against the likes of 2014 Derby-winning Horse of the Year California Chrome. 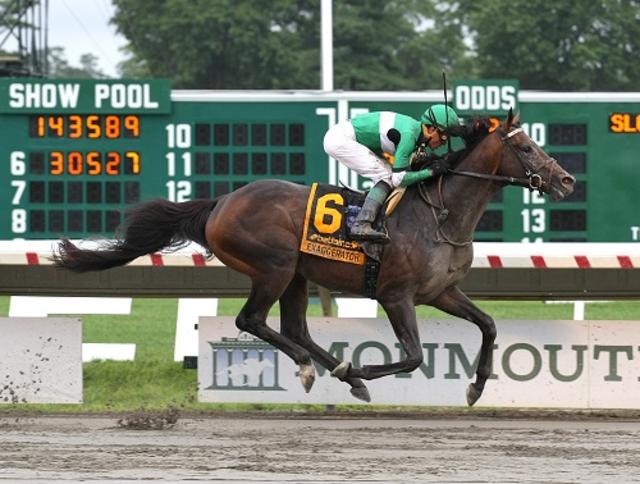