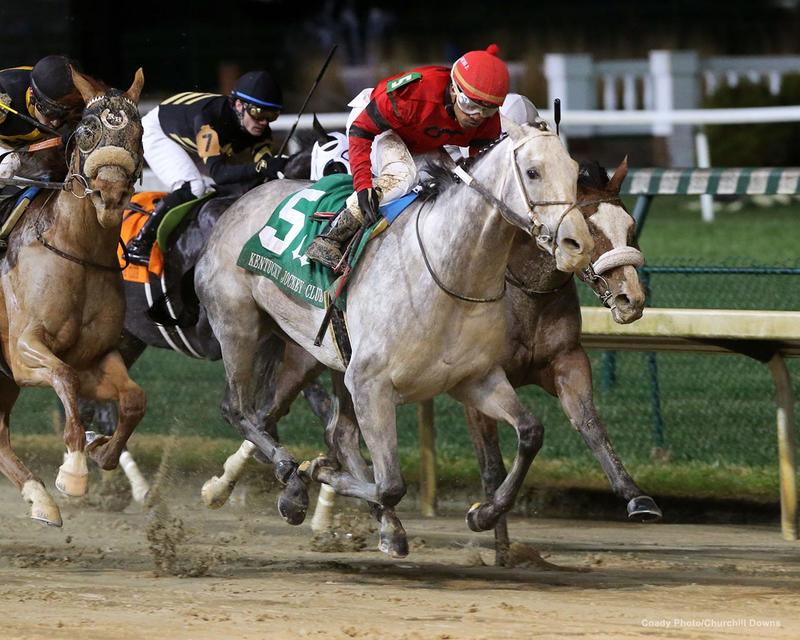 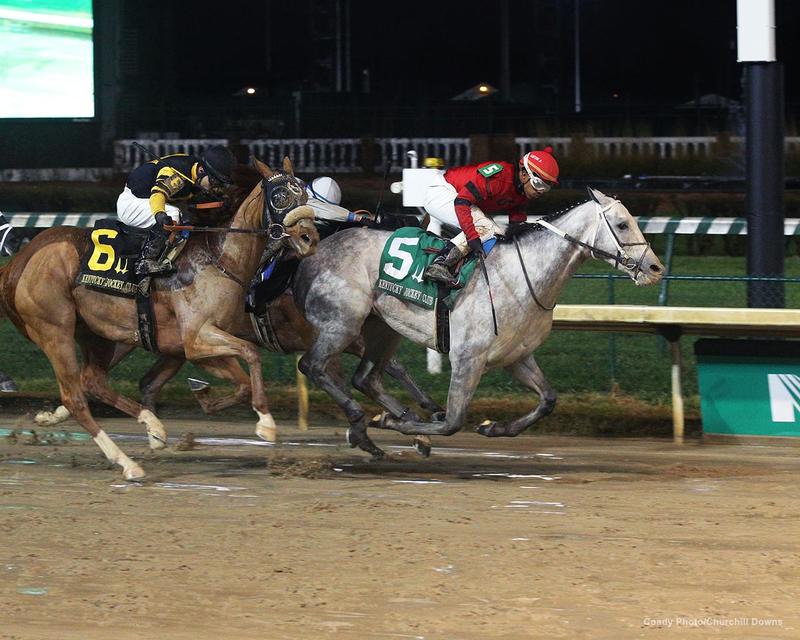 A rainy day and a sloppy, sealed track would normally dampen the spirits of horsemen and horseplayers alike, but no amount of rain could spoil the parade of trainer Steve Asmussen and jockey Ricardo Santana Jr., who nabbed a memorable graded stakes double at Churchill Downs on Saturday, November 30.

Early contenders for the 2020 Kentucky Derby (G1) and Kentucky Oaks (G1) were on display in the $300,000 Kentucky Jockey Club Stakes (G2) and the $300,000 Golden Rod Stakes (G2), both held over 1 1/16 miles. A variety of promising juveniles splashed their way through the sloppy, sealed track at Churchill Downs in search of Derby and Oaks qualification points, and when the mud settled, it was the Asmussen trainees who brightened an otherwise dreary day.

The winners brought distinctly different profiles to their respective races. Finite, a decisive winner of the October 27 Rags to Riches Stakes at Churchill Downs, was favored at 4-5 in the Golden Rod and lived up to expectations with a hard-fought victory. Reserved in third place early on under a perfect ride from Santana, the daughter of Munnings advanced smartly around the turn and held off a determined late rally from Motu to win by three-quarters of a length in 1:45.99.

Owned by the partnership of Winchell Thoroughbreds, Thomas Reiman, William Dickson, and Deborah Easter, Finite recorded her third consecutive victory and secured 10 qualification points on the Road to the Kentucky Oaks.

“She’s a super nice filly,” said Santana. “The credit goes to Steve and his team because they have been working hard with this filly to get her to relax in the morning. She settled very nicely behind horses and was not going to let anyone get by her today.”

While bettors widely expected Finite to prevail, they were decidedly surprised by the outcome of the Kentucky Jockey Club Stakes. Impressive Champagne Stakes (G1) winner Tiz the Law was favored at 3-5 for Sackatoga Stable and trainer Barclay Tagg, but the acclaimed colt spent much of the race buried behind horses and didn’t get a clear run until late in the stretch.

In the meantime, Santana kept 7-1 shot Silver Prospector reserved off the pace and out of traffic. This allowed the gray son of Declaration of War to rally unencumbered around the far turn and down the stretch, which made a difference in the final strides. In a gritty performance, Silver Prospector forged to the front inside the eighth pole and stemmed off challenges from both sides to win by three-quarters of a length.

Previously third in the October 27 Street Sense Stakes at Churchill Downs, Silver Prospector stopped the clock in 1:45.94 and secured 10 Kentucky Derby qualification points. 87-1 shot Finnick the Fierce followed Silver Prospector down the lane to edge the troubled Tiz the Law by a head for second place.

“It’s so special winning races for Steve,” said Santana. “I love both of these horses so much and to win both of these races was very special today. He was able to relax behind horses today and was really comfortable the entire trip. He showed a lot of strength being able to kick that hard in the stretch.”

Silver Prospector is owned by Ed and Susie Orr.

“It’s very special to have horses compete at the highest level on days like today,” added Asmussen. “This horse has learned how to relax and was able to do that very well today.”

As for Tiz the Law, the favorite lost the race and his unbeaten record, but his defeat was forgivable given the challenging circumstances he faced. After waiting in traffic for most of the race, taking kickback while unable to advance, Tiz the Law bulled his way through an almost non-existent opening in the homestretch and briefly reached even terms with Silver Prospector before changing leads and losing his momentum.

“He handled the mud okay but I never was able to get him out of that spot on the rail,” explained jockey Manny Franco. “He felt good the entire way but he got a little too far behind horses and we never got through.”

“Well, it’s disappointing it’s not our day today,” added Sackatoga Stable representative Jack Knowlton. “We sent him down here to get a run over the track and we got into some trouble in the race. Hopefully we can move forward out of this and we’ll figure out a plan for what can be next.” 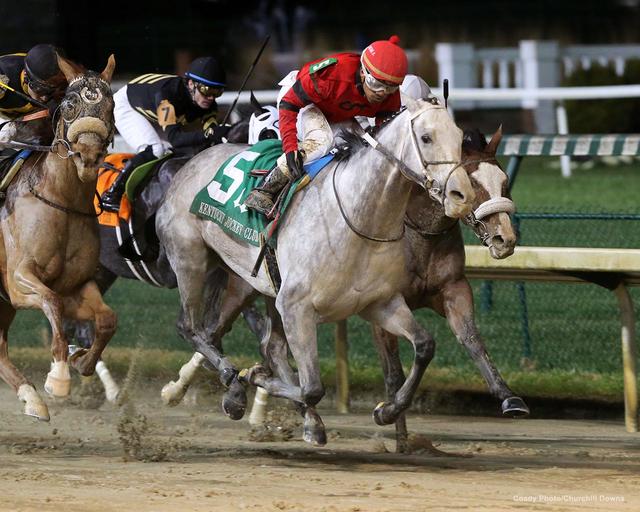