The day of upsets in Kentucky Derby (G1) preps continued Saturday from the Gotham (G3) to the $400,000 Fountain of Youth (G2) at Gulfstream Park, where Gunnevera turned in an explosive stretch run to win the 1 1/16-mile race by 5 3/4 lengths, while even-money favorite Irish War Cry, who had beaten Gunnevera in last month's Holy Bull (G2), finished seventh at even-money.

Like El Areeb, who earlier Saturday faltered in the Gotham at odds of 2-5 despite dominating in earlier Derby preps at Aqueduct, Irish War Cry was heavily backed off his own local last-out prep triumph in the Holy Bull. Irish War Cry was well-placed in second outside the speedy Three Rules through splits of :23.43, :47.18 and 1:12.37, but came under a ride around the turn and failed to keep pace.

Meanwhile, Gunnevera, who had trailed the field of 10 after a quarter-mile, gradually improved position throughout and reached contention turning for home. The Antonio Sano trainee swept past Practical Joke, last year's Hopeful (G1) and Champagne (G1) winner making his season debut, and the fading Three Rules, and opened up a commanding lead under Javier Castellano.

Owned by Peacock Racing Stables, Gunnevera is now a three-time graded winner. The Kentucky-bred son of Dialed In also captured the Saratoga Special (G2) and Delta Downs Jackpot (G3) last year. Besides his loss in the Holy Bull, he was unplaced in two other stakes appearances last term. 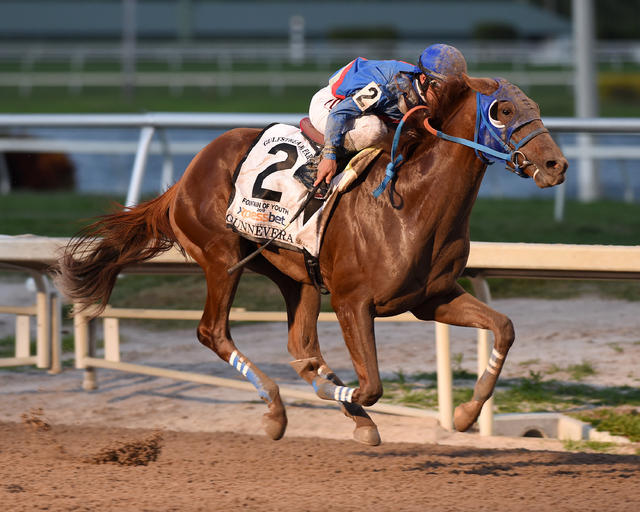