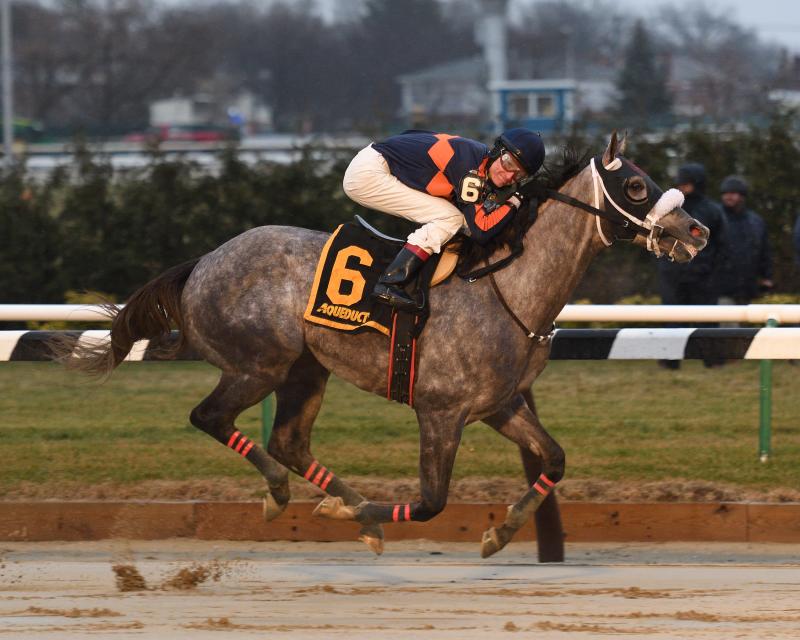 M M G Stables' El Areeb, shown in a victory in the Jerome (GIII) at Aqueduct, has been knocked out of Kentucky Derby consideration after suffering an injury that will require surgery.  Wagering on El Areeb (#6) has been suspended in the March 31-April 2 Pool 4 of the Kentucky Derby Future Wager. (Coglianese Photo, NYRA)

An injury has taken M M G Stables’ El Areeb out of consideration for a run in the Kentucky Derby Presented by Yum! Brands (Grade I) and wagering on the colt has been suspended in Pool 4 of Churchill Downs Racetrack’s Kentucky Derby Future Wager (“KDFW”), which opens its three-day run on Friday, March 31

Published reports indicate that El Areeb (#6, 30-1) had suffered a bone chip in his right front knee that would sideline the Withers (GIII) and Jerome (GIII) winner and prevent the colt from competing in the April 8 Wood Memorial (GII) and May 6 Kentucky Derby.

Wagering on El Areeb is suspended in KDFW Pool 4, which will proceed on Friday with 23 wagering interests that include 22 individual horses and the mutuel field, which includes all 3-year-olds other than those individual horses.

The official rules of the KDFW prohibit scratches or refunds. As in the case of El Areeb, when Churchill Downs determines that a KDFW wagering interest has encountered an injury, illness or other circumstance would prohibit that horse from competing in the 2017 Kentucky Derby, wagering on the individual is suspended immediately.

Betting in the final KDFW pool of 2017 is set to open at noon (all times EDT) on Friday and continue through Sunday, April 2 at 6 p.m. The wager, which has been offered annually to Kentucky Derby fans since 1999, will be available at racetracks and satellite wagering facilities throughout North America and online at TwinSpires.com and other internet wagering platforms.

The KDFW provides racing fans with the opportunity to wager on contenders for the Kentucky Derby at odds that could be more attractive than those available on the day of America’s greatest race. Payouts in the win and exacta wagering in Pool 4 will be determined by the odds in place at Sunday’s conclusion of wagering.

Free BRISNET past performance information and real-time odds for both the Kentucky Derby and Kentucky Oaks Future Wagers are available online at www.KentuckyDerby.com.

CLICK HERE for the updated roster of betting interests in Pool 4 of the Kentucky Derby Future Wager.