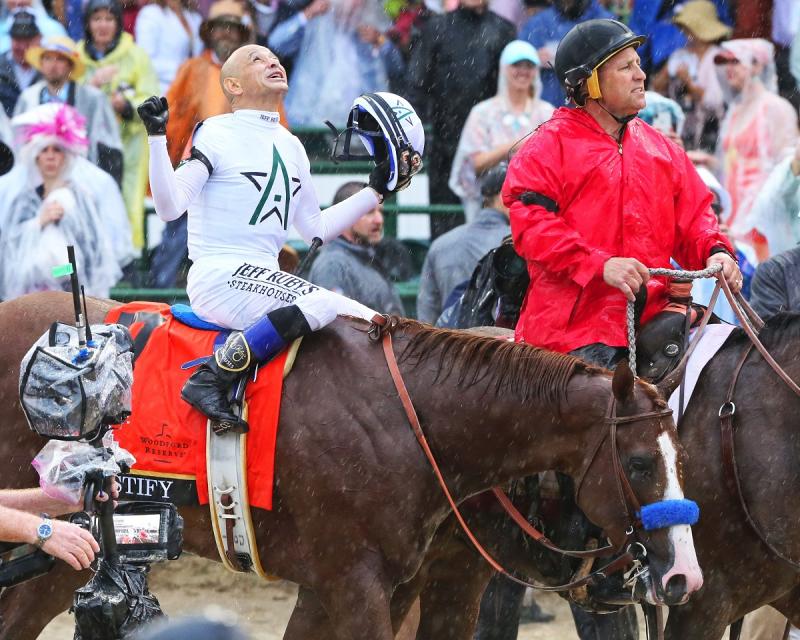 Mike Smith, 52, became the second-oldest jockey to win the Derby after Bill Shoemaker who was 54 in 1986 (Photo by Coady Photography)

As that rapid-fire summary suggests, jockey Mike Smith has reached the pinnacle of the sport. And now at the age of 52, he may achieve the ultimate in North American racing: a Triple Crown sweep aboard unbeaten Justify.

Smith has already completed a “personal” Triple Crown, having won each jewel twice himself. But teaming up with a Triple Crown winner would put him an exclusive club, and put an exclamation point on a career marked by longevity at the top.

Like Justify’s Hall of Fame trainer, Bob Baffert, Smith hails from the American Southwest. The Roswell, New Mexico, native grew up in a racing family. His father, George, was a sometime jockey. His maternal grandparents raised horses on a Dexter, New Mexico, farm, and his uncle was a trainer.

With a pedigree like that, Mike was a natural to get involved in the game. He learned how to strike up a trusting relationship with horses as a child on the farm, and as an 11-year-old, he was already riding match races at bush tracks. His career formally commenced when he got his jockey’s license at 16. During that 1982 season, Smith won with 36 of 317 mounts and finished “in the money” (in the top three) at a 33 percent clip, according to Equibase statistics.

Smith’s numbers escalated rapidly from there as he plied his trade in the Midwest. In 1983, he more than tripled his mounts, rode 141 winners, finished in-the-money 40 percent of the time, and increased his purse earnings tenfold to surpass the $1 million mark in just his second year with a license. He rode in his first Kentucky Derby in 1984, guiding sixth-placer Pine Circle, and received the return call for his fifth in the Preakness (G1).

Shifting tack to New York in 1989 brought Smith to a new level, and he forged partnerships with some of racing’s brightest stars of the 1990s. New York-bred Fourstars Allstar even put his up-and-coming rider on the world stage. They shipped to Ireland in 1991 to upset a classic mile race at the Curragh Racecourse, the Irish 2000 Guineas (G1), and Smith became the first U.S.-based jockey to win a European classic.

That could be seen as a harbinger of Smith’s success in the Breeders’ Cup World Championships, for his breakthrough came with another turf miler by the name of Lure. A future Hall of Famer himself, Lure became his first Breeders’ Cup winner when wiring the 1992 Mile (G1) at Gulfstream Park. Lure successfully defended his Breeders’ Cup title in 1993 at Santa Anita, crowning a sensational season for his rider.

Smith won his first Triple Crown race the same year, taking the 1993 Preakness aboard ill-fated Prairie Bayou. With a series of other high-profile winners, and as the regular pilot of future Hall of Famer Sky Beauty, he earned his first Eclipse Award, and an ESPY, as the nation’s outstanding jockey.

Thanks to a stellar 1994 highlighted by Hall of Famer Holy Bull, and featuring fellow inductees Inside Information and Heavenly Prize, Smith repeated as the Eclipse Award-winning jockey. Unfortunately, Holy Bull’s championship campaign was blighted by a subpar 12th as the 2-1 favorite in the Kentucky Derby. In a gnawing what-might-have-been, the steel gray colt showed his trademark speed – and heart – to capture the Travers (G1) over subsequent Breeders’ Cup Classic (G1) hero Concern, and he also lorded it over older horses in such prestigious events as the Met Mile (G1) and Woodward (G1).

A decade later, Smith would finally snare that Derby trophy, fittingly enough with a son of Holy Bull – the 50-1 longshot Giacomo who stunned Churchill Downs in 2005. Giacomo was owned by Jerry and Ann Moss and trained by John Shirreffs, the team we’d later come to know much better with Zenyatta.

But that brilliant second half of Smith’s career almost didn’t happen. Twice injured in spills in 1998, his second and more serious accident came at Saratoga, where he was unseated, his mount rolled over him, and he broke two vertebrae. While he was fortunate not to suffer an even worse spinal cord injury, Smith was confined to a body cast for a time and ended up on the sidelines for several months.

Known for his rigorous workout regimen, Smith believes that his longtime training habits helped him to overcome it all. Getting back in action physically was one thing; resuming business connections after being away for that length of time was something else.

Smith’s renaissance was sparked by a cross-country move to Southern California in 2000. He teamed up with future Hall of Fame distaffer Azeri, the 2002 Horse of the Year, and that season’s unbeaten champion two-year-old colt Vindication. Thanks to that duo, Smith returned to the Breeders’ Cup winner’s circle for the first time since his 1997 Classic (G1) victory aboard Hall of Famer Skip Away.

Zenyatta would single-handedly give him two more Breeders’ Cup trophies. The popular racemare who wowed fans with her pre-race “dances,” her dramatic come-from-behind style, and her 19-race unbeaten streak, Zenyatta triumphed over her own division in the 2008 Breeders’ Cup Ladies’ Classic (G1). Instead of merely going for a repeat in 2009, she took on males and became the first (and so far only) female to capture the Breeders’ Cup Classic. Her lone loss came in her career finale in the 2010 Classic, just failing to get past champion colt Blame at the wire. Although Smith took the loss hard, and blamed himself mercilessly, the rider was not responsible for Zenyatta’s own willful display of dropping excessively far back early.

Zenyatta’s heyday coincided with Smith’s stint on “Jockeys.” The sports reality show, which ran for two seasons on Animal Planet, gave a glimpse of a rider’s life behind the scenes.

Smith has found life after Zenyatta. He’s won the Breeders’ Cup Classic twice more, with Drosselmeyer (2011) and Arrogate (2016), the latter for Justify’s trainer Baffert. Drosselmeyer also handed him his first Belmont S. (G1) score in 2010, while Arrogate was the son of another Breeders’ Cup star for Smith, Unbridled’s Song, whom he rode in the 1995 Juvenile (G1). Although Arrogate’s peak lasted only a brief span, Smith steered him home in the world’s richest races, the $12 million Pegasus World Cup (G1) and the $10 million Dubai World Cup (G1) in 2017.

The leading Breeders’ Cup jockey by both wins (26) and money won ($35,874,605), Smith dominates the table in both categories. Fellow Hall of Famer John Velazquez is a distant second with $25.5 million in Breeders’ Cup purse earnings and a joint second at 15 wins (tied with the retired Jerry Bailey).

Smith is second to Velazquez on the all-time North American earnings list, his mounts taking home nearly $312 million over his 36-year career. And his 5,461 win total also ranks him among the greats of his profession.

Now in the twilight of his career, Smith is helping his longevity by limiting his number of races, choosing to concentrate on the best horses rather than the usual bread-and-butter of an entire card. So in one sense he’s coming full circle, his number of starts the fewest since he was just starting out in New Mexico. But take a look at his earnings per start – an eye-popping $74,694 in 2017 – and you can see the quality of those mounts.

Winning races and piling up money are not the only reasons that Smith qualifies as a success. His list of honors transcends the business side of the industry, reflecting how well he’s respected. The winner of the George Woolf, Mike Venezia, and Laffit Pincay Jr. Awards, all in recognition of his character, Smith was enshrined in the Hall of Fame in 2003.

If the big chestnut Justify can add the June 9 Belmont to his Derby and Preakness trophies, he’ll join his jockey and trainer in the Hall one day. You can bet that Smith will give him every chance to get there. 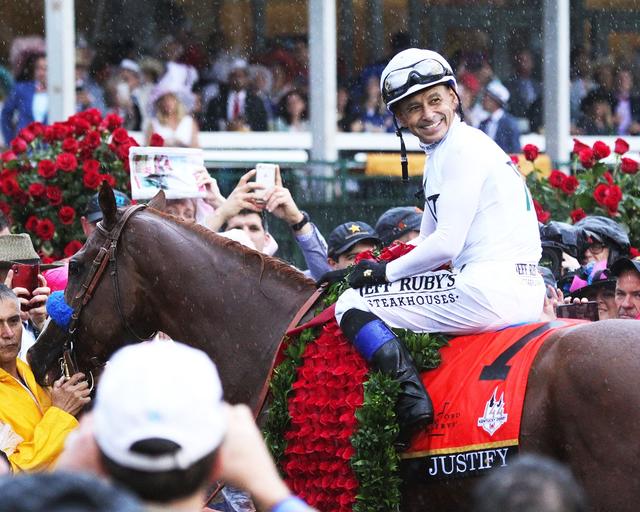