Named Horse of the Year after capturing the 2014 Run for the Roses, California Chrome is regarded as the world’s top racehorse following convincing Grade/Group 1 victories in the Dubai World Cup, Pacific Classic and Awesome Again Stakes this year. He will be a prohibitive Classic favorite and North America’s all-time leading earner can push his bankroll past the $16 million mark with a win.

Victor Espinoza, who guided California Chrome to a 1 ¾-length win in the Kentucky Derby, rides the Art Sherman-trained horse.

Nyquist extended his ledger to 8-for-8 posting a 1 ¼-length decision at Churchill Downs this spring but the champion 2-year-old male has not won since, finishing third in the Preakness before a fourth in the Haskell Invitational and a sixth in the Pennsylvania Derby. The son of record-setting freshman sire Uncle Mo is 3-for-3 at Santa Anita and connections hope Nyquist can turn things around over his home track.

Frosted, who finished fourth behind American Pharoah in the 2015 Kentucky Derby, is also considered likely for the 1 ¼-mile Classic. The multiple Grade 1-winning son of leading sire Tapit has recorded a couple of prestigious wins in 2016, notching a spectacular 14-length tally in the Met Mile on the Belmont Stakes undercard before easily capturing the Whitney at Saratoga, but Frosted is seeking to rebound after a third in the Woodward last time out.

The $1 million Dirt Mile could feature five past runners from the Kentucky Derby.

Dortmund, who edged Frosted by a neck when third in last year’s first leg of the Triple Crown, is the horse to beat in the Dirt Mile. Trained by Hall of Famer and four-time Kentucky Derby winner Bob Baffert, the 4-year-old son of 2008 Kentucky Derby winner Big Brown has captured 8-of-13 career starts, losing all five times to Kentucky Derby winners (American Pharoah twice last year and California Chrome the last three starts). Dortmund is 2-for-2 at the mile distance.

Gun Runner, who parlayed a forwardly-placed trip at Churchill Downs into a third-place finish behind Nyquist, is under consideration for both the Classic and Dirt Mile. Given he had little left in the latter stages of two previous 1 ¼-mile starts, the 3-year-old colt appears to fit better at the shorter distance. Gun Runner has posted three graded stakes victories this season and exits a commendable half-length second in the Pennsylvania Derby.

Vyjack, who is under consideration for the Dirt Mile and Mile, is the veteran of the group, checking in 18th against Orb in the 2013 Kentucky Derby. The 6-year-old gelding has undergone a couple of trainer changes since his 3-year-old season and will enter the Breeders’ Cup in good form for Phil d’Amato, rallying to win the Grade 2 City of Hope Mile at Santa Anita on October 8.

Tom’s Ready exits an upset win over Runhappy in the October 1 Ack Ack at Churchill Downs. Runner-up in the Louisiana Derby (G2) but only 12th in the Kentucky Derby, the 3-year-old colt has appreciated the cutback to middle distances, recording graded stakes wins in two of his last three starts, and the confirmed closer will attempt to keep showing more in the Dirt Mile.

Upstart, who is possible for the Dirt Mile, completes the grouping. He didn’t fare well in the 2015 Kentucky Derby, checking in last of 18 runners, but Upstart prefers less ground. The 4-year-old was last seen finishing third to Frosted in the Whitney. 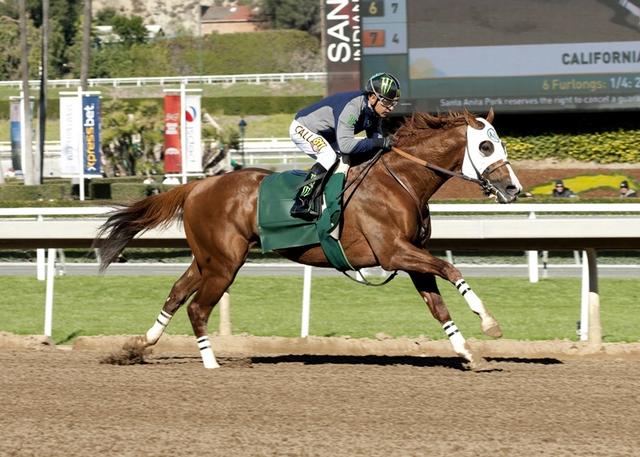