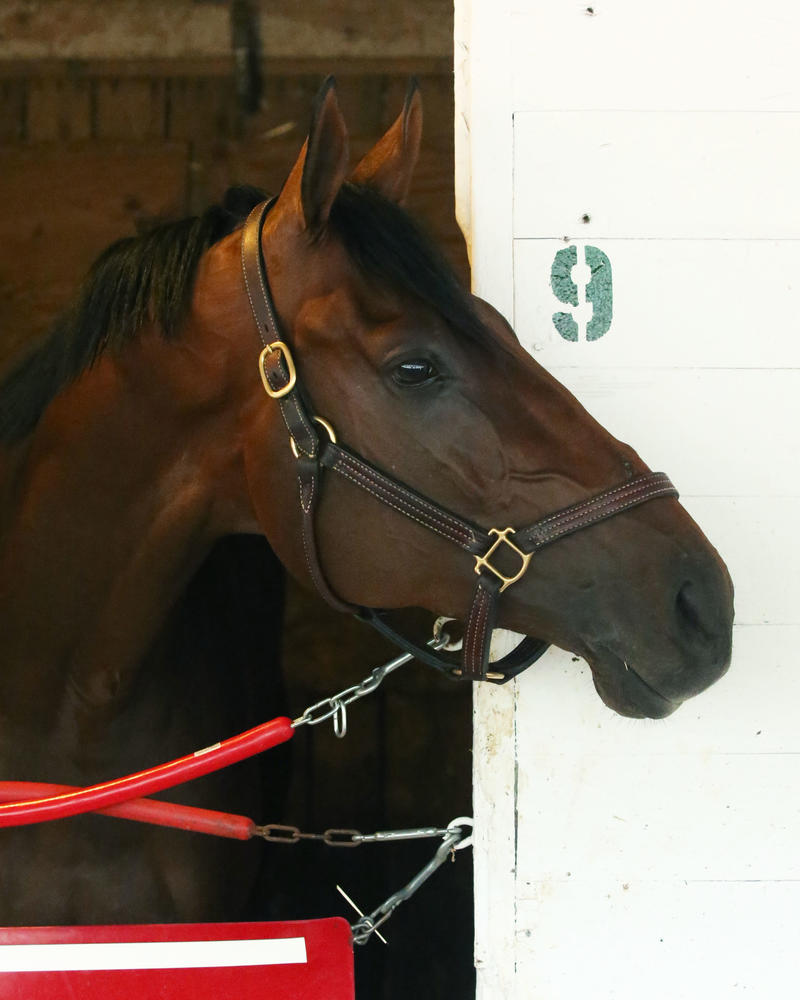 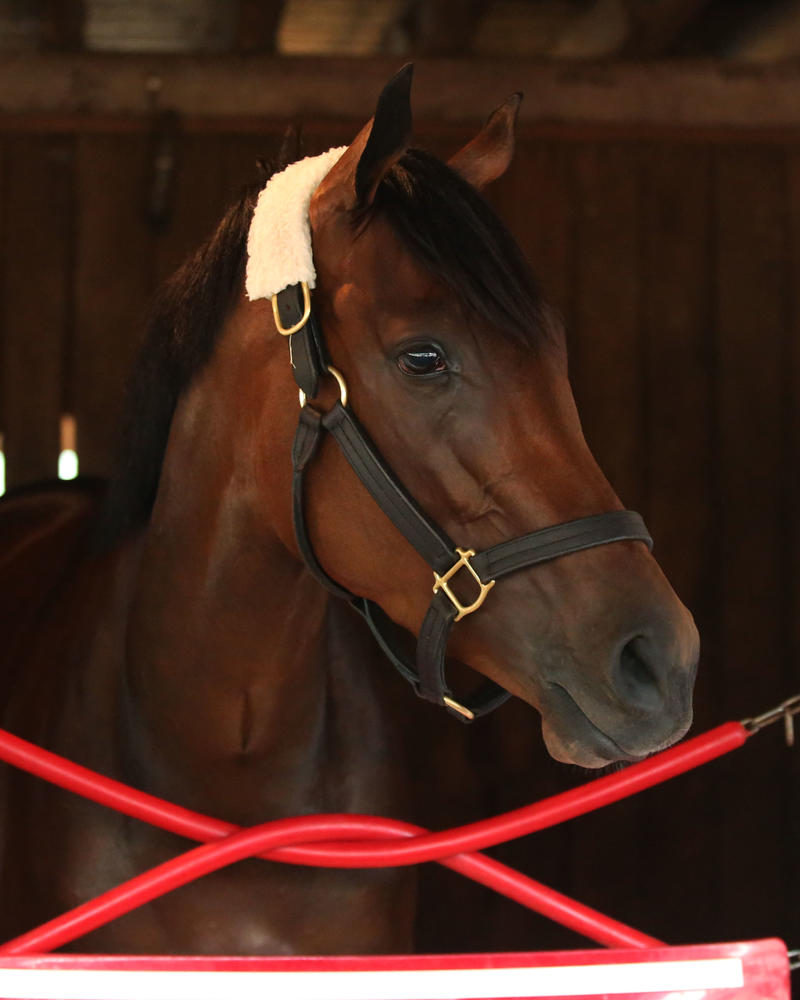 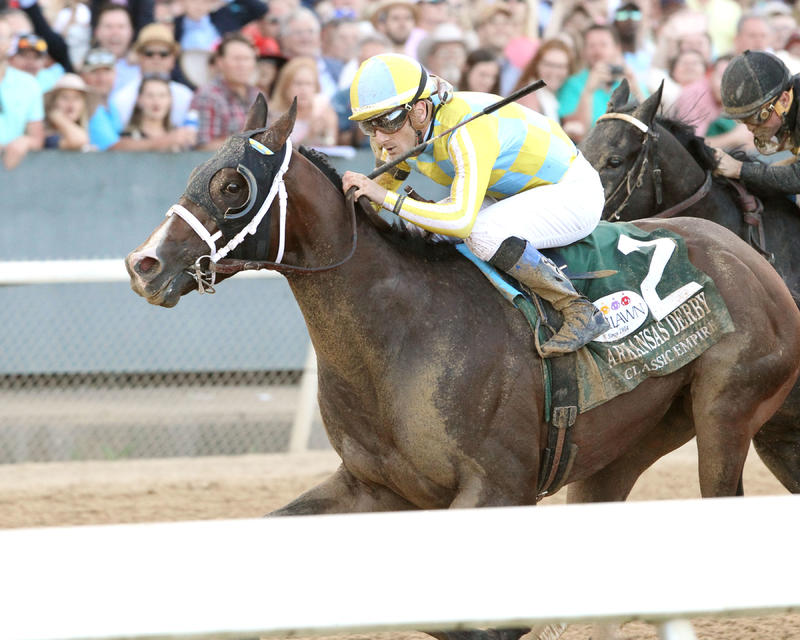 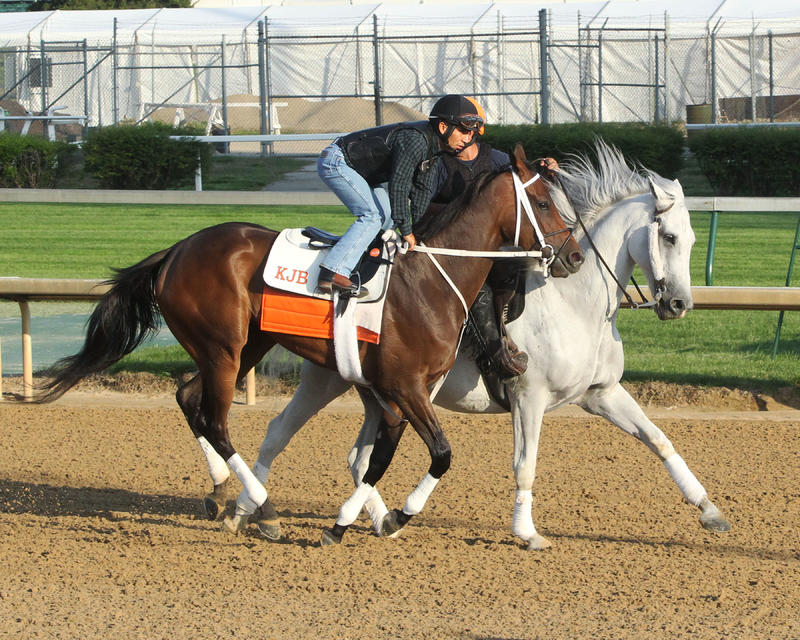 Trainer Mark Casse’s barn breezed 16 horses Friday morning at Churchill Downs including Florida Derby (GI) runner-up State of Honor, who worked five furlongs in 1:01.60 for the Grade I, $2 million Kentucky Derby Presented by Yum! Brands on Saturday, May 6, and Gulfstream Park Oaks (GII) winner Salty, who breezed five furlongs in 1:00.40 in preparation for the Longines Kentucky Oaks (GI) on Friday, May 5.

State of Honor, with jockey Julien Leparoux aboard, breezed through splits of :13, :26 and :37.40 before galloping out three-quarters of a mile in 1:14 and seven furlongs in 1:27.80 over a “fast” track. In the Derby, Leparoux will pilot the Casse-trained Classic Empire. Jose Lezcano has the Derby mount aboard State of Honor.

“State of Honor breezed very well,” assistant trainer Norm Casse said. “I’m very happy with how he looked on the track and he’s developing well for the Derby.”

“Salty is one of those horses that gets me excited,” Casse said. “She did everything well within herself and looked great cooling out at the barn.”

Joel Rosario is slated to pilot Salty in the Kentucky Oaks.

Casse’s other Derby hope, Classic Empire, returned to the track Friday for the first time since winning the April 15 Arkansas Derby (GI) and stamping himself as one of the early Kentucky Derby favorites.

“We brought Martin Rivera in from Florida to be Classic Empire’s main exercise rider,” Casse said. “Martin works with a lot of our younger horses on the farm and got along well with Classic Empire when we sent him to Winding Oaks this winter.”

The Casse contingent is stabled in Barn 36 at Churchill Downs.

SEVERAL DERBY, OAKS TRAINERS WATCHING WEATHER – The National Weather Service forecast for Louisville on Saturday is calling for a 100 percent chance of rain, and several horsemen are altering training plans for their Kentucky Derby (Grade I) and Kentucky Oaks (GI) contenders:

•    Spiral (GIII) winner Fast and Accurate is scheduled to breeze at 6 a.m. Saturday morning at Trackside Louisville, according to trainer Mike Maker.
•    Louisiana Derby (GII) winner Girvin was vanned to Keeneland on Friday and is expected to train over the Polytrack training track with his breeze pushed back from Saturday to as far as Monday, according to trainer Joe Sharp.
•    Blue Grass (GII) fourth-place finisher J Boys Echo is targeted to breeze Sunday at Churchill Downs for trainer Dale Romans.
•    Janis Whitham’s Blue Grass (GII) third-place finisher McCraken is scheduled to breeze Monday at Churchill Downs, according to trainer Ian Wilkes.
•    Calumet Farm’s Sunland Derby (GIII) winner Hence is scheduled for a Monday breeze, according to Steve Asmussen’s assistant Scott Blasi.
•    Fair Grounds Oaks (GII) winner Farrell is expected to have only one more breeze sometime next week before the Kentucky Oaks on Friday, May 5, according trainer Wayne Catalano’s assistant Fernando Canteria.

“It was an easy maintenance breeze,” New Jersey-native Breen said. “She did everything easy and is doing very well. Right now I don’t think we need to do any more serious conditioning with her. She’ll have one more easy breeze next weekend.”

Arlene’s Sun Start Stable’s homebred will take a five-race win streak into the first Friday in May that includes a 13-length romp in the Gazelle (GII) at Aqueduct on April 8.

“She’s always has done well at Aqueduct,” Breen said. “We ran her at Gulfstream Park in March but I thought the cold weather would do her well and help condition her for the Oaks.”

DOWN THE STRETCH – Santa Anita Derby (Grade I) runner-up Battle of Midway was purchased privately by WinStar Farm and Don Alberto Stable as first reported Friday morning by Daily Racing Form.  The 3-year-old son of Smart Strike will continue to be trained by Jerry Hollendorfer and will be ridden by new jockey Flavien Prat in the Derby. … Trainer Todd Pletcher breezed Florida Derby (GI) winner Always Dreaming and Louisiana Derby (GII) runner-up Patch in separate five-furlong moves Friday at Palm Beach Downs and both were timed in 1:01.40. … Pletcher’s Kentucky Derby week contingent is expected to be bedded down in Barn 40 soon. Wood Memorial runner-up Battalion Runner is booked for a van ride from Belmont Park to Churchill Downs on Monday. Tampa Bay Derby winner Tapwrit and Rebel Stakes winner Malagacy will van to Churchill Downs from Keeneland on Monday. Florida Derby winner Always Dreaming and Louisiana Derby runner-up Patch will be flown from Palm Beach Downs in south Florida to Kentucky on Tuesday. …Pletcher reports that he will have no starters in this year’s Kentucky Oaks. … Florida Derby (GI) third-place finisher Gunnevera breezed five furlongs in 1:01 Friday morning at Gulfstream Park West. The 3-year-old son of Dialed In is scheduled van to Churchill Downs from Miami on Saturday and will be stabled in Barn 41 upon arrival (estimated time unknown at press time). … Blue Grass (GII) winner Irap breezed one mile Friday morning at Keeneland in 1:44. The Doug O’Neill trainee is expected to ship to Churchill Downs after his next published workout. ... Blue Grass runner-up Practical Joke breezed a half-mile in :49.80 Friday at Keeneland for trainer Chad Brown. … The exclusive training period for Kentucky Derby and Kentucky Oaks contenders at Churchill Downs begins Saturday from 8:30-8:45 a.m. The live stream presented by TwinSpires.com will be available at multiple sources including on Twitter via @KentuckyDerby and kentuckyderby.twitter.com; on Facebook at www.facebook.com/kentuckyderby; and www.kentuckyderby.com/workouts/live.  The Twitter stream, available globally to logged-in and logged-out users, will also feature a timeline of Kentucky Derby related tweets alongside the live video itself. … Churchill Downs has a new schooling chute for starting gate workouts that will be utilized for the first time on Saturday. The chute is positioned around the far turn at the 5/16-mile pole. … The upcoming National Weather Service forecast for Louisville: Saturday (100% showers, 55), Sunday (mostly cloudy, 30% showers, 64), Monday (sunny, 73), Tuesday (mostly sunny, 78) and Wednesday (partly sunny, 81, 20% showers and thunderstorms). … “Inside Churchill Downs,” co-hosted by Churchill Downs Racetrack’s John Asher, Darren Rogers and Kevin Kerstein, airs Saturday from 10-11 a.m. (all times Eastern) on ESPN 680/105.7 and can be heard online at www.ESPNLouisville.com. … Nell Whiting, the widow of Lynn Whiting, told Churchill Downs officials that funeral and memorial arrangements for the veteran trainer will be finalized after the May 6 Kentucky Derby. Lynn Whiting, trainer of 1992 Kentucky Derby winner Lil E. Tee, passed away Wednesday at age 77. 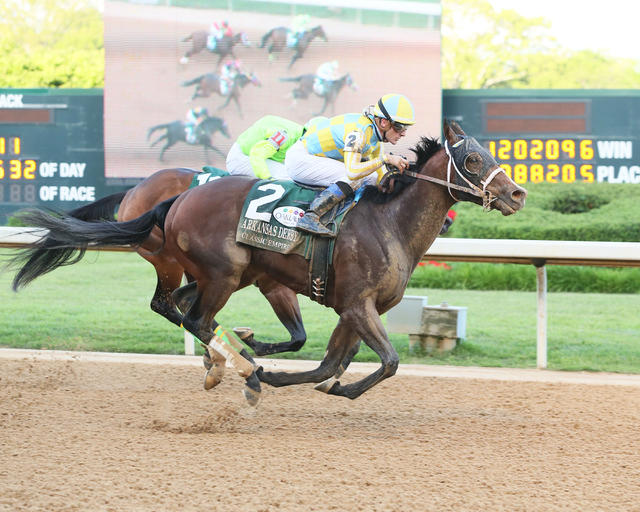