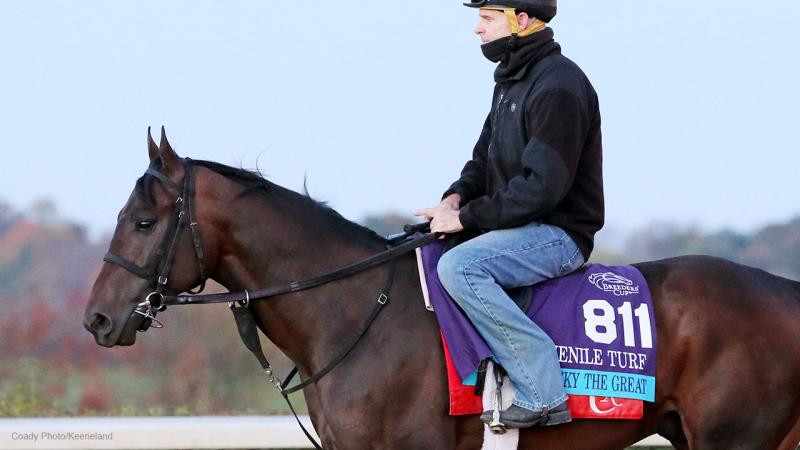 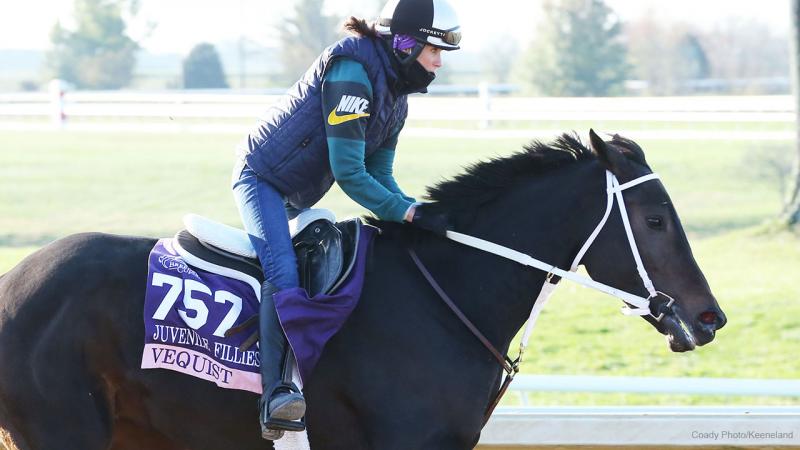 Five years ago, Nyquist clinched an Eclipse Award in the Breeders’ Cup Juvenile (G1) at Keeneland, and the following spring, he turned a rare double by adding the Kentucky Derby (G1). Now Nyquist has chances of scoring an historic Breeders’ Cup win as a sire, also at Keeneland, with a couple of his first-crop 2-year-olds in action on “Future Stars Friday.”

Nyquist’s first opportunity comes in the Breeders’ Cup Juvenile Turf (G1), where his Gretzky the Great takes on a deep European team. The aptly named colt continues the hockey theme from his sire, who’s named in honor of the NHL’s Gustav Nyquist.

Trained by Mark Casse, Gretzky the Great has won three straight since his second on debut, all at Woodbine. The Ontario-bred comes off a sharp victory in the Sept. 20 Summer (G1), a “Win and You’re In,” and he projects a forward trip from post 11. With new rider Tyler Gaffalione aboard, Gretzky the Great could be a value play at 8-1 on the morning line.

Nyquist’s next hope is Vequist in the Breeders’ Cup Juvenile Fillies (G1), where she also has more appeal than her 8-1 morning line implies. A 9 1/2-length winner of the Sept. 6 Spinaway (G1) in near stakes-record time at Saratoga, Vequist was most recently second in the Frizette (G1). The Butch Reid trainee is eligible to improve on the stretch-out to 1 1/16 miles, and new pilot Joel Rosario can work out a ground-saving passage from post 2.

Moreover, it would represent a rarer third-generation Breeders’ Cup success, beginning with Nyquist’s sire, Uncle Mo, the 2010 Juvenile champion. The first to kick off such a sequence was Unbridled, the 1990 Classic hero and sire of Unbridled’s Song, victorious in the 1995 Juvenile and himself the sire of six winners.

Uncle Mo himself has chances of racking up additional Breeders’ Cup winners over the two-day championships. He is double-handed in Friday’s Juvenile Turf Sprint with 8-5 favorite Golden Pal for Wesley Ward as well as Aidan O’Brien’s Irish shipper Lipizzaner, a 20-1 outsider.

In the Juvenile Fillies, Uncle Mo’s daughter Girl Daddy is a 6-1 shot after capturing the Pocahontas (G2). He also has a pair of granddaughters in the same race. Aside from Nyquist’s Vequist, there is the 5-2 Simply Ravishing, by Uncle Mo’s son Laoban, who romped in the Oct. 2 Alcibiades (G1) at this track and trip.

Laoban, a freshman sire like Nyquist, extends Uncle Mo’s influence to the Juvenile itself. Both of Laoban’s colts are 30-1 longshots, but exiting good efforts at Keeneland for Robertino Diodoro. Keepmeinmind was runner-up in the track-and-trip Breeders’ Futurity (G1), and Dreamer’s Disease wired an allowance on the same Oct. 3 card. Yet another first-crop sire by Uncle Mo, Outwork, is represented in the Juvenile Turf by Outadore.

Uncle Mo has two runners in Saturday Breeders’ Cup races, both lightly raced sophomores on the upgrade. Unbeaten Yaupon (7-2) tackles veterans in the Sprint, and Harvest Moon (12-1) aims to step up in an epic Distaff. Uncle Mo would have had a major contender in the Mile, Mo Forza, who unfortunately is sidelined.

It’s remarkable that Uncle Mo’s first-crop sons are making a splash as freshman sires themselves. Nyquist remains his chief standard-bearer as a Breeders’ Cup and Kentucky Derby champion. Interestingly, both Outwork and Laoban had been on the 2016 Derby trail too. Outwork won the Wood Memorial (G1) before finishing 14th behind Nyquist at Churchill Downs. Laoban placed in the Sham (G3) and Gotham (G3) and belatedly broke his maiden in the Jim Dandy (G2) over the summer. That angle bodes well for the stud prospects of Uncle Mo’s son Mo Town, the 2016 Remsen (G2) and 2017 Hollywood Derby (G1) hero whose first foals will be yearlings of 2021.

Note that Nyquist is not the only Kentucky Derby winner with runners in the 2020 Breeders’ Cup. The aforementioned American Pharoah has Harvey’s Lil Goil in the Filly & Mare Turf, and 2011 Derby champion Animal Kingdom is the sire of Turf Sprint hope Oleksandra.

Nyquist has two others running in a pair of 6 1/2-furlong stakes on the Friday undercard, both 15-1 shots on the morning line. Thinking lines up in the Songbird S., commemorating the winner of the 2015 Juvenile Fillies here. Assertive Style bids for a heartwarming score in the companion stakes honoring the 2015 Juvenile champion - the Nyquist S. 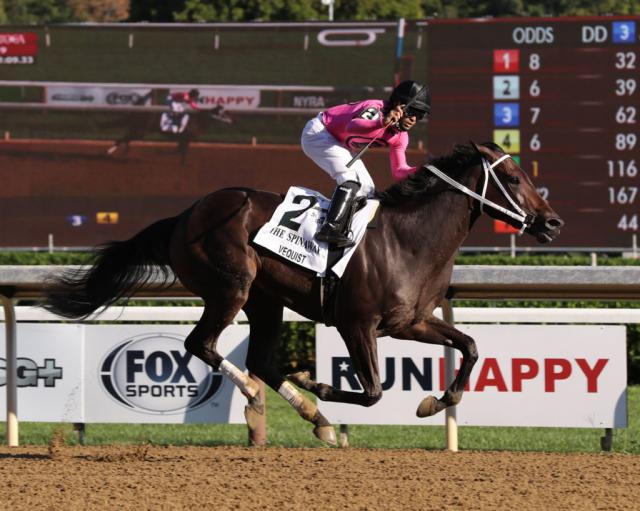