With just one significant point-scoring opportunity remaining on the prep schedule, the field for the May 1 Kentucky Derby (G1) is nearly set after a busy round of final preps this past weekend.

Essential Quality's narrow victory in the Blue Grass (G2) cemented his position as the clear head at the top of the points leaderboard, as well as the role of the favorite on the first Saturday in May. Entering the leaderboard for the first time were Rock Your World, who captured the Santa Anita Derby (G1), and Bourbonic, who sprung the biggest upset in Wood Memorial (G2) history at odds of 72-1.

Bourbonic is one of potentially four starters for two-time Derby-winning trainer Todd Pletcher, who also saw Wood Memorial runner-up Dynamic One secure a spot in the field with a solid run in what was his stakes debut.

Not every horse currently in the Top 20 is likely headed to Louisville, though. Weyburn and Crowded Trade are reportedly leaning against an appearance under the Twin Spires, nor is participation from UAE Derby (G2) winner Rebel's Romance a sure thing. That might open up spots in the field to horses currently sitting on the borderline, such as Rombauer, Proxy and Hidden Stash, should their connections be interested in running.

Saturday's Arkansas Derby (G1) at Oaklawn Park is the final prep that will award 100 qualifying points to the winner and 40 points to second, so the top two finishers in that 1 1/8-mile test are sure to get in if they haven't already done enough to do so. Concert Tour will be a strong favorite in the Arkansas Derby, but an earlier win in the Rebel (G2) already ensured his Kentucky Derby slot. His stablemate Hosier, who ran second in the Rebel, can become trainer Bob Baffert's third Derby starter with another placement on Saturday. 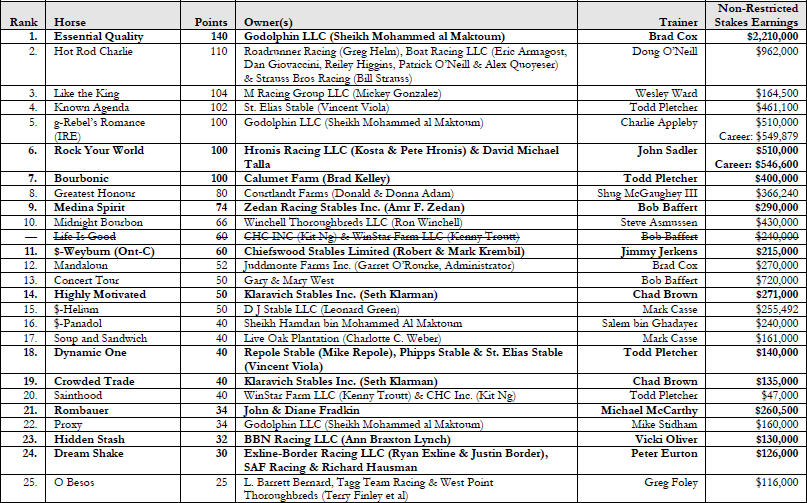