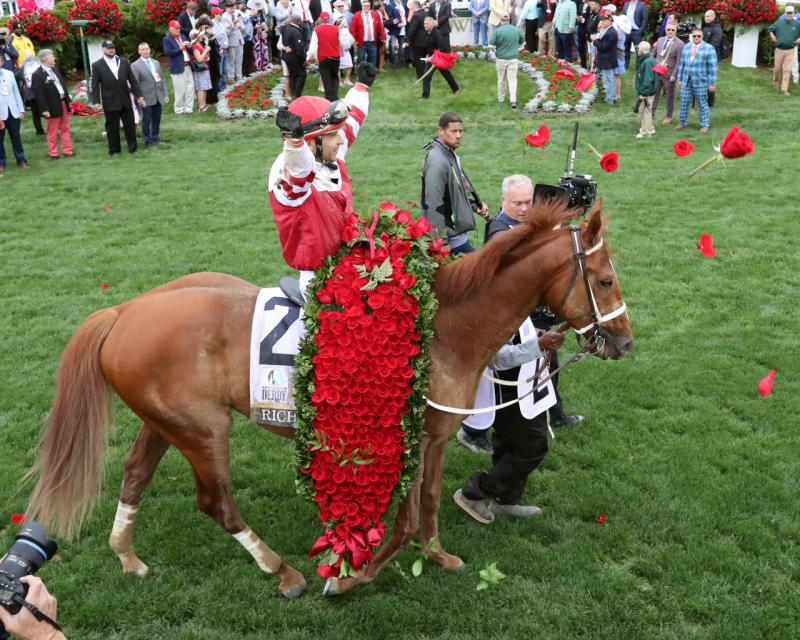 Rich Strike wears the roses that eluded sire Keen Ice and grandsire Curlin (Photo by Coady Photography)
With his dramatic late surge to upset the Kentucky Derby (G1) at 80-1, Rich Strike evoked memories of his sire, Keen Ice, who ran down Triple Crown star American Pharoah in the 2015 Travers (G1).
Rich Strike’s dam, Gold Strike, was accomplished herself. Canada’s champion three-year-old filly of 2005, she placed third versus the boys in the Queen’s Plate.
Indeed, you might say that Rich Strike has a “striking” pedigree: he’s closely inbred to Smart Strike, a Canadian Hall of Famer and outstanding sire.
Here are the pedigree fun facts for Rich Strike, a record 10th Derby winner bred by historic Calumet Farm:
1. Keen Ice was 20th on the final Kentucky Derby leaderboard in 2015.
Like Rich Strike going into the Derby, Keen Ice was nibbling at minor awards on the Triple Crown trail. He too employed a closing style that was dependent upon the pace scenario, and shaped as though he’d need longer distances to bring out his best.
Keen Ice competed in more Road to the Kentucky Derby scoring events than Rich Strike did, but he only scored 22 points – one point more than Rich Strike. His best results were thirds in the Remsen (G2) and Risen Star (G2) and a fourth in the Louisiana Derby (G2). On the final points leaderboard, Keen Ice just made the cut at number 20. Ironically, the first also-eligible in his year, number 21 Frammento, also drew into the Derby field due to a scratch (and finished 11th).
Unlike Rich Strike, Keen Ice couldn’t gain enough ground late to factor in his Derby, but he did improve position down the stretch. He rallied for seventh, 8 3/4 lengths behind American Pharoah. Keen Ice skipped the Preakness (G1) and tried again in the Belmont (G1), performing better to take third. He came even closer to “Pharoah” next time in the Haskell (G1), where he was a hard-charging runner-up, just 2 1/4 lengths adrift.
2. Keen Ice upset American Pharoah in the 1 1/4-mile Travers.
Thus Keen Ice entered the Travers on the upswing, and he put it all together in a career-defining performance. Perhaps American Pharoah was feeling the effects of a too-spirited gallop on Travers Eve. But he was harried through much of the race by Frosted, who put his head in front turning for home before Pharoah repelled him. Then Keen Ice rolled into view as a fresh challenger, and the 16-1 shot overtook the odds-on Hall of Famer by three-quarters of a length. Fourth in that Travers was Upstart, sire of Zandon, the third-placer behind Rich Strike in the 2022 Derby.
Although Keen Ice was unable to beat American Pharoah again, checking in a distant fourth in the Breeders’ Cup Classic (G1), he added to his resume as an older horse. His other major victory also came at 1 1/4 miles, in the 2017 Suburban (G2), and he placed in the Breeders’ Cup Classic (behind Arrogate and California Chrome), Jockey Club Gold Cup (G1), and Woodward (G1) (to Horse of the Year Gun Runner).
3. Keen Ice’s sire is Breeders’ Cup Classic-winning Hall of Famer Curlin.
Keen Ice is by Hall of Famer Curlin, whose bankroll of just over $10.5 million was at that time a North American record. Third in the 2007 Derby, Curlin turned the tables in the Preakness and just missed in the Belmont to champion filly Rags to Riches. His Breeders’ Cup Classic victory clinched the divisional championship as well as Horse of the Year honors. Curlin continued his reign as the 2008 Horse of the Year with marquee wins in the Dubai World Cup (G1), Stephen Foster H. (G1), Woodward (G1), and Jockey Club Gold Cup (for the second straight year).

Curlin became a classic sire with his very first crop, as Palace Malice captured the 2013 Belmont. Keen Ice has emulated him by getting Rich Strike in his first crop. Curlin joined the exclusive club of Preakness winners to sire a winner of that middle jewel, courtesy of Exaggerator (2016), who was coming off a second in the Derby. Curlin’s other top performers include the Eclipse Award-winning fillies Stellar Wind and Malathaat, and a pair of Breeders’ Cup champions that took on Justify in the 2018 Triple Crown races: Good Magic, who finished second in the Kentucky Derby; and Vino Rosso, fourth in the Belmont. 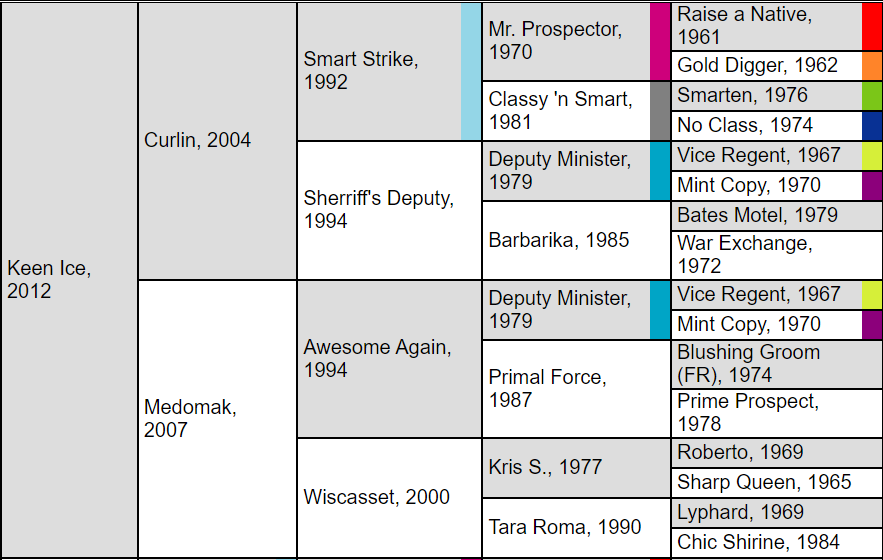 Awesome Again is a son of another Canadian Hall of Famer, Deputy Minister, who won both Sovereign and Eclipse Awards as a dual champion juvenile in 1981. Sire of the great but ill-fated filly Go for Wand, fellow Hall of Famer Open Mind, Touch Gold (who denied Silver Charm the Triple Crown in the 1997 Belmont), and Dehere (sire of the prolific mare Take Charge Lady), Deputy Minister has been especially influential as a broodmare sire.
Curlin himself is out of a Deputy Minister mare, as are three Belmont winners – his rival Rags to Riches and her half-brother Jazil (2006), as well as Sarava (2002). Arrogate and Songbird’s dams were in turn out of mares by Deputy Minister.
Hence Keen Ice is inbred to Deputy Minister, counting him as an ancestor via both Curlin and Awesome Again.
6. Rich Strike is closely inbred to Smart Strike, sire of Curlin and Gold Strike.
Curlin is by Smart Strike, who is also the sire of Rich Strike’s dam, Gold Strike. Smart Strike is worthy of such a doubling-up in light of his ability on the racetrack and the genetic heritage he’s expressed at stud.
By supersire Mr. Prospector and out of Canadian champion Classy ‘n Smart, Smart Strike is a half-brother to U.S. and Canadian Hall of Famer Dance Smartly. He just hinted at his talent by winning six of eight career starts, notably the 1996 Philip H. Iselin (G1) at Monmouth, where Hall of Fame filly Serena’s Song was third.
Aside from Curlin, Smart Strike has sired such champion sons as Lookin at Lucky and English Channel, both successful sires themselves. Interestingly, two of their high-profile winners are bred along similar lines as Keen Ice. Lookin at Lucky sired champion Accelerate, the 2018 Breeders’ Cup Classic winner, out of an Awesome Again mare. English Channel sired V. E. Day, the 2014 Travers hero, out of a Deputy Minister mare. Moreover, recent Kentucky Oaks (G1) participant Hidden Connection is by Curlin’s son Connect out of an Awesome Again mare.
Smart Strike is now the broodmare sire of two Derby winners, both longshots. Mine That Bird skimmed the rail to his 50-1 upset in 2009, and Rich Strike found an inside path at an even bigger 80-1. Other Smart Strike daughters are responsible for 2010 Breeders’ Cup Filly & Mare Turf (G1) heroine Shared Account; Queen’s Plate champs Eye of the Leopard (2009) and Inglorious (2011); and millionaire First Dude, placed in the 2010 Preakness, Belmont, and Travers.
7. Gold Strike was Canada’s champion three-year-old filly of 2005.
The Manitoba-bred Gold Strike began her career at Assiniboia Downs, winning two stakes as a juvenile including the one-mile Buffalo S. by 15 3/4 lengths. She raced exclusively at Canada’s premier track, Woodbine, at three and four.
Gold Strike romped in the Selene (G3), her stepping stone to the 1 1/8-mile Woodbine Oaks, which she also dominated as the 11-10 favorite. Up in trip to 1 1/4 miles for the first jewel of the Canadian Triple Crown, the Queen’s Plate, Gold Strike forced the pace, kicked clear, and tired late in third. She was sidelined for the rest of the season, but had done enough to win the Sovereign Award. Gold Strike ran only twice in 2006, returning with a second in the Hendrie (G3). She signed off after a fourth in a listed stakes to Flaming Heart, who would become the dam of 2014 Belmont near-misser Commissioner.
8. Gold Strike is also the dam of Grade 2 winner Llanarmon.
Before Rich Strike came along, Gold Strike was a graded producer thanks to her daughter Llanarmon. The Ontario-bred filly captured the 2013 Natalma (G2) and 2014 Carotene S., both on turf, and she placed in three other stakes including the Woodbine Oaks.
Calumet purchased Gold Strike as a 13-year-old broodmare, securing her for $230,000 at the 2015 Keeneland November Sale. Gold Strike went through the same sale in 2019, bringing only $1,700. The buyer was Tommy Wente of St. Simon Place, ironically the breeders of Rattle N Roll, who didn’t draw into the Derby as the second also-eligible. 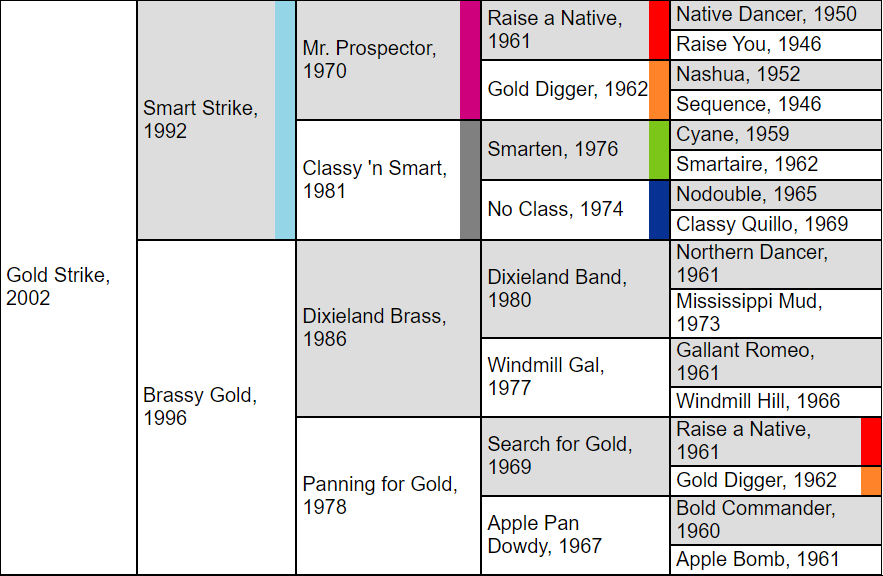 9. Gold Strike’s dam is by a Fountain of Youth winner.

Gold Strike is out of the unraced Brassy Gold, by Dixieland Brass, who was a promising sophomore of 1989. The son of Dixieland Band concluded his juvenile campaign by edging Black Tie Affair (the future Horse of the Year) in the 1988 Allegheny S. at the track now known as Parx.
Dixieland Brass followed up with two graded victories at Gulfstream Park. A six-length hero of the Hutcheson (G3), he justified 6-5 favoritism in the Fountain of Youth (G2). Dixieland Brass brought a four-race winning streak into the Florida Derby (G1) as the 9-10 choice. Unfortunately, he was pulled up with an injury and retired to stud. Dixieland Brass eventually stood in British Columbia.
10. Rich Strike’s third dam is by a full brother to Mr. Prospector.
Brassy Gold’s dam, Panning for Gold, was a minor stakes winner going 1 3/16 miles at the old Greenwood Racetrack. She is by Search for Gold, an older brother of Mr. Prospector.
Both “Mr. P” and Search for Gold are sons of unbeaten juvenile Raise a Native and the classy racemare Gold Digger, by Hall of Famer Nashua. In the shadow of his far more significant brother, stakes-placed Search for Gold sired Grade 2 winner Sun Catcher, and he is also the broodmare sire of Canadian champion Ten Gold Pots.
11. Rich Strike’s fourth dam is by the same sire as the 1970 Kentucky Derby winner.
Panning for Gold’s dam, Apple Pan Dowdy, is by Laurel track record-setter Bold Commander. A blueblood son of supersire Bold Ruler and champion filly High Voltage, Bold Commander sired 1970 Kentucky Derby hero Dust Commander as well as French classic winner In Fijar.
Bold Commander has made his mark as the damsire of 1982 Belmont conqueror and Horse of the Year Conquistador Cielo (by Mr. Prospector). Another Bold Commander mare is the granddam of the aforementioned Black Tie Affair, the Breeders’ Cup Classic-winning Horse of the Year in 1991.
12. Rich Strike traces to the same family as the 1945 Kentucky Derby winner.

As noted in the pedigree fun facts for the 2022 Derby field, Rich Strike belongs to the family labeled as number 9. Also tracing to that tail-female line is Hoop, Jr., the 1945 Derby winner, but the connection is remote. You have to go back to the British mare Young Whiteneck (born in 1739) to find where their branches converge.

Note that several other Derby heroes come from subsets of the number 9 family that are differentiated by letters. Spokane (1889) is from the 9-a tribe, Forward Pass (1968) from 9-c, Bold Forbes (1976) and Country House (2019) from 9-f, Sir Barton (1919) from 9-g, and *Omar Khayyam from 9-h.
Rich Strike is a direct matrilineal descendant of Variation, the 1830 Epsom Oaks victress. The entire number 9 family, with its various branches, is accessible at bloodlines.net. 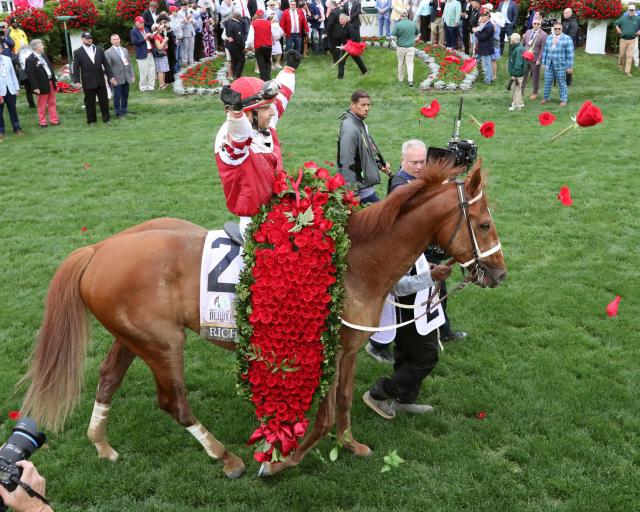