Living up to favoritism in his seasonal reappearance, Mendelssohn turned in a professional performance in Friday’s Patton S. at Dundalk. In the process, the Breeders’ Cup Juvenile Turf (G1) winner vaulted to the top of the European Road to the Kentucky Derby leaderboard.

As in the Breeders’ Cup, Mendelssohn broke from the rail, and jockey Ryan Moore masterminded the textbook stalk-and-pounce trip. Only here, he was facing a much smaller field of five rivals (compared to 13 others at Del Mar), and pacesetting stablemate Threeandfourpence obligingly steered off the fence entering the stretch to give Mendelssohn a clear path on the inside.

Yet Threeandfourpence didn’t go down without a fight. By digging in stubbornly, he forced Mendelssohn to work harder to get past. That tussle will do Mendelssohn a world of good going forward. Although all three of the O’Brien runners are eligible to improve off their mutual comeback, Mendelssohn may benefit the most as a big colt likely needing this race fitness-wise. Threeandfourpence did his part to help.

Staying on strongly in deep stretch, Mendelssohn finally mastered Threeandfourpence by three-quarters of a length in a final time of 1:38.80 for the mile on Polytrack. Mendelssohn’s effort, although workmanlike, was all the more creditable since he was carrying 134 pounds, five more than Threeandfourpence.

Seahenge, who put himself in a poor tactical position with a slow start, ground his way home in a non-threatening third. As the 134-pound co-highweight with Mendelssohn, Seahenge may be seen to better effect at level weights.

The fillies Blackgold Fairy (earning 2 points for fourth), Princess Yaiza, and Ship of Dreams rounded out the order under the wire. Two were scratched – Zihba, after spiking a fever, and Irish Minister, after refusing to enter the starting gate.

Mendelssohn’s 20 points equal the totals garnered by stablemate Saxon Warrior in last fall’s Beresford (G2) and Racing Post Trophy (G1), and those pocketed by Gronkowski in Wednesday’s Road to the Kentucky Derby Conditions S. at Kempton. But Mendelssohn wins the tiebreak – earnings in non-restricted stakes – with $747,307. Moreover, Saxon Warrior isn’t Triple Crown nominated, aiming instead for the Derby (G1) at Epsom.

Interestingly, neither Mendelssohn nor Gronkowski is banking on an invitation from their standing on the European leaderboard. While Mendelssohn, Threeandfourpence, and Seahenge are going points-hunting in Dubai, Gronkowski is reportedly shipping stateside for the Wood Memorial (G2) or Blue Grass (G1). Thus the two leading European-based Triple Crown nominees could well earn their way into Derby 144 by way of the main leaderboard, not by way of the new path carved out for them at home.

One race remains on the European leaderboard, the March 30 Buradon S. at Newcastle, offering the biggest point haul of 30-12-6-3. The Buradon winner will leapfrog Mendelssohn and Gronkowski, but will he (or she) accept the invitation as the top European points earner?

Mendelssohn’s sire, the late Scat Daddy, has been in the news lately thanks to another high-flying son, Justify, who will try to make the Derby after breaking his maiden first time out February 18. Trained by Hall of Famer Bob Baffert, Justify is entered in an allowance race at Santa Anita on Sunday, to give him another racing experience before contesting a final major prep.

Photo of Mendelssohn from the Breeders' Cup by Jamie Newell/Horsephotos.com 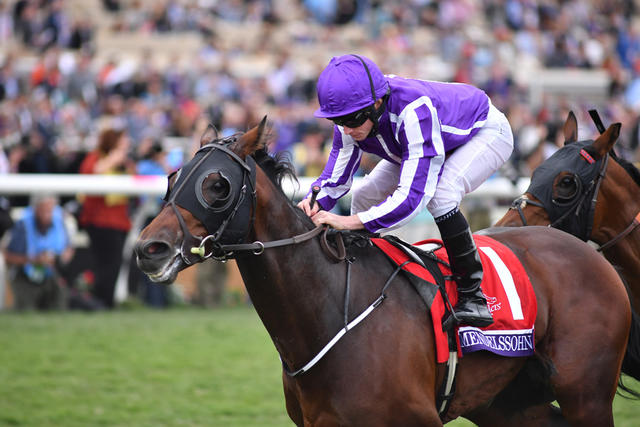