Mo Donegal put his name back into serious Kentucky Derby discussion, rallying powerfully to overhaul Early Voting by a neck in the $1 million Wood Memorial (G1) at Aqueduct. The Todd Pletcher-trained colt closed from last to first with Joel Rosario, completing 1 1/8 miles in a sharp 1:47.96, and he’ll bring a strong finishing kick to Kentucky Derby on May 7.

Owned by Donegal Racing, Mo Donegal rebounded from a non-threatening third in his seasonal opener, the Feb. 5 Holy Bull (G3) at Gulfstream Park, and he stamped his Kentucky Derby ticket in the major qualifier.

Off as the 2-1 second choice in the Wood, Mo Donegal was unhurried at the back of the eight-horse field as Early Voting showed the way on a short lead through fractions of :23.86, :47.75, and 1:11.59. The pacesetter accelerated clear in upper stretch, but Mo Donegal was closing fast into contention.

Mo Donegal came flying to catch Early Voting, who had recorded convincing wins in the Feb. 5 Withers (G3) and a maiden special weight in his first two starts. The runner-up ran huge in defeat, winding up 3 1/2 lengths clear of Skippylongstocking in third, and A. P.’s Secret, Barese, 9-5 favorite Morello, Long Term, and Golden Code came next under the wire.

Bred in Kentucky by Ashview Farm and Colts Necks Stables, Mo Donegal was purchased for $250,000 as a yearling. He concluded last year with a victory in the Remsen (G2) at Aqueduct, scoring by a nose over Zandon, who convincingly won Saturday’s Blue Grass (G2) at Keeneland, and Mo Donegal’s career record now reads 5-3-0-2.

In the 1 1/8-mile Gazelle, Nostalgic rallied boldly along the inside to overhaul even-money favorite Venti Valentine, earning her first stakes win with a 1 1/4-length decision. Jose Ortiz was up on the Godolphin homebred daughter of Medaglia d’Oro for Bill Mott, and Nostalgic stopped the teletimer in 1:50.41.

She stalked in fourth before launching her bid into the stretch. Last seen romping in a March 3 allowance at Gulfstream, Nostalgic finished fourth when making her stakes debut in the Demoiselle (G2) last fall and opened her sophomore season with an unplaced showing in a turf stakes. The bay miss has now won 3-of-5 starts.

Venti Valentine, a seven-length winner of the March 5 Busher S. at a one-turn mile, weakened at the longer distance after controlling the pace on a clear lead. Shotgun Hottie wound up another two lengths back in third, and Classy Edition, Divine Huntress, Morning Matcha, and Caragate completed the order.

Nostalgic is out of the stakes-placed Tapit mare Been Here Before. 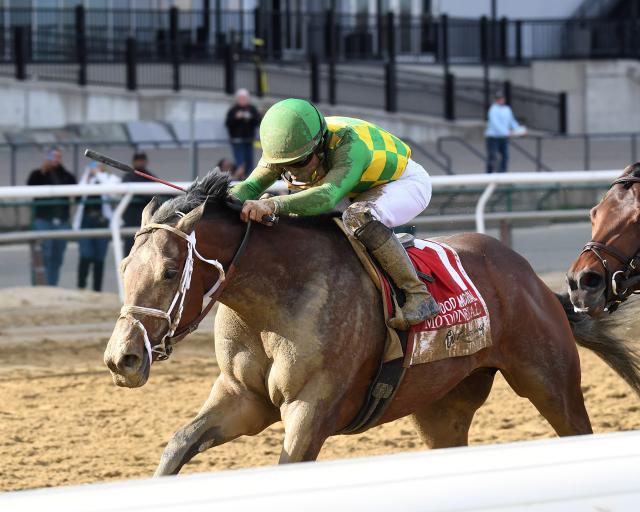