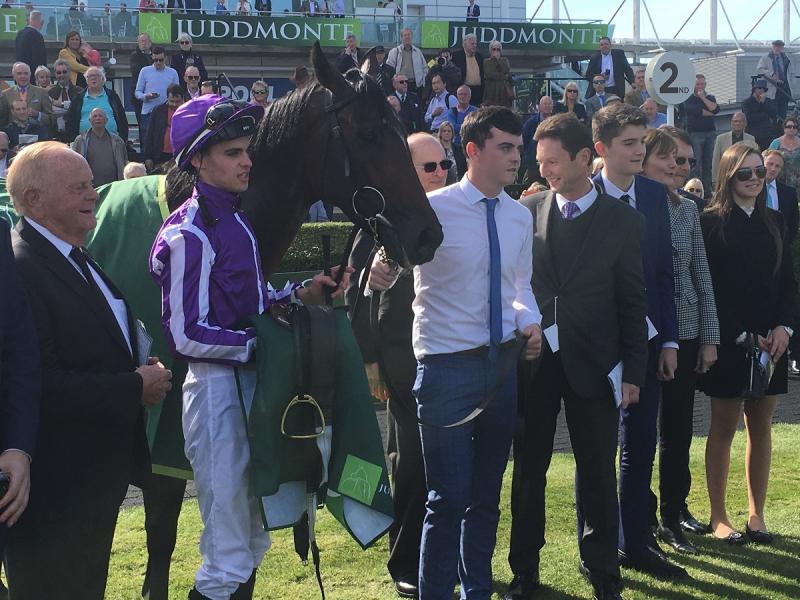 Mohawk captured the first scoring race on the European Road to the Kentucky Derby, the Royal Lodge at Newmarket (Photo by Mike Ziegler)

Aidan O’Brien runners swept the first scoring race on the European Road to the Kentucky Derby, the Royal Lodge (G2) at Newmarket on Saturday, with Mohawk leading home stablemates Sydney Opera House and Cape of Good Hope. Aside from banking 10 points on the European leaderboard, Mohawk earned a free ticket to the November 2 Breeders’ Cup Juvenile Turf (G1) at Churchill Downs as part of the “Win and You’re In” program.

Mohawk, off at odds of 8-1, was improving substantially from his previous stakes efforts at the Curragh. Third in the Futurity (G2) and fourth in the Vincent O’Brien National (G1), the Galileo colt benefited from stepping up from seven furlongs to a mile. Perhaps even more significant was the chance to race on good-to-firm ground for the first time since his maiden win at Cork in June.

Ridden by the trainer’s son Donnacha, Mohawk stalked the pace set by joint leaders Sydney Opera House and Victory Command. The John Gosden-trained Beatboxer, the 7-4 favorite, was further back, came under pressure surprisingly early, and wound up being a tailed-off last. Arthur Kitt, the 11-4 second choice, was also beaten when the serious running started and trudged home fifth.

But Team O’Brien all stepped up to the plate. Mohawk stayed on best of all to score by 1 1/4 lengths, finishing the mile down the straight course in 1:36.12.

Sydney Opera House outperformed his odds as the 20-1 longest shot on the board by holding second (good for 4 points on the European Road). Cape of Good Hope, Highland Reel’s full brother, checked in third (2 points). Victory Command crossed the wire in fourth (1 point), followed by Arthur Kitt, Duke of Hazzard, and Beatboxer.

O’Brien’s immediate postrace comments indicated that Mohawk was unlikely to take up his Breeders’ Cup spot.

“He might not run any more this year and be put away to start in the (European) Classic trials. I'd imagine he has done enough (this season). That is what we're thinking at the moment, but that can change.”