Both fillies picked up 10 points toward a berth in the April 30 Kentucky Oaks at Churchill Downs.

In the Las Virgenes, Moonlight d’Oro rated in last among five runners during the early stages, launched her move four-wide on the far turn, and overhauled pacesetter Kalypso in upper stretch. The Richard Mandella trainee quickly drew clear, recording a 1 1/2-length triumph with Flavien Prat.

Off as the 13-10 second choice in her fourth career start, the Medaglia d’Oro filly completed the mile distance in 1:38.01.

Owned by MyRacehorse and Spendthrift Farm, Moonlight d’Oro was bred in Kentucky by Stonehaven Steadings. She was purchased for $620,000 at the 2019 Keeneland September yearling sale. The bay is out of the Bernardini mare Venetian Sonata, a half-sister to Grade 2 winners Beethoven and Wilburn.

In the Suncoast, Curlin’s Catch split horses leaving the far turn to strike the front and drew off to a 4 1/2-length decision. Antonio Gallardo was up on the 18-10 favorite, and Mark Casse trains the Curlin filly for Breeze Easy.

Curlin’s Catch, who dropped her first two starts on Woodbine’s Tapeta last fall, switched to dirt and recorded a smashing wire-to-wire maiden win at Gulfstream in early January. The bay reverted to rating tactics on Saturday, finishing up the mile and 70-yard distance in a respectable 1:40.89. 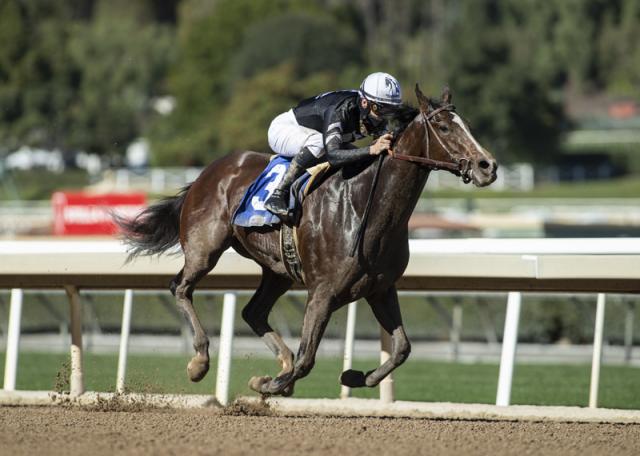