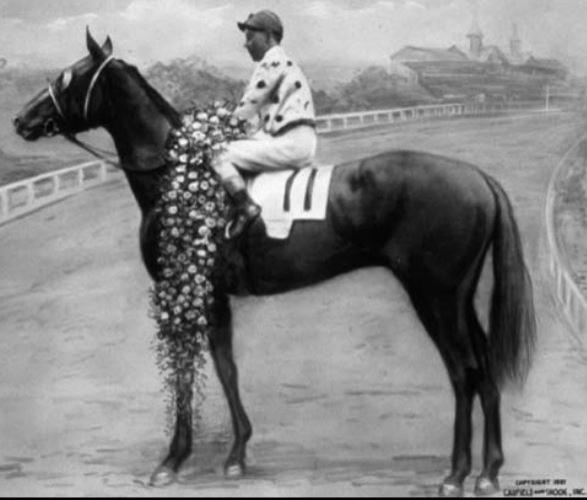 Continued from the biographical introduction in Part 1, “They called him Mr. Fitz: remembering Hall of Famer Sunny Jim Fitzsimmons”

Mr. Fitz’s horsemanship carried him through those lean times, along with a reputation for impeccable honesty and integrity. He began to pick up well-to-do clients who brought him to a higher level of racing, and eventually, he hit the heights with patrician owners.

His big breakthrough came when William F. Woodward Sr. appointed him as his trainer in 1924. Proprietor of historic Belair Stud in Maryland, Woodward would serve as Chairman of The Jockey Club for two decades. The Europhile owner/breeder supplied Mr. Fitz with a cadre of bluebloods, and the trainer developed the best of them into the classic winners so desired by Woodward.

Of Mr. Fitz’s 13 wins in Triple Crown races – a record that stood for more than a half-century – the first 12 came with Belair runners. That dozen includes three runnings of the Kentucky Derby, three Preaknesses, and six Belmonts. The Belmont total befits Woodward’s emphasis on classic stamina.

The first three trophies came in rapid succession courtesy of homebred Gallant Fox, who swept the Preakness, Derby, and Belmont (in that order) in 1930. Although he was the second horse to win all three after Sir Barton (1919), the term “Triple Crown” was just now gaining currency in an American context. Just as England’s three classic races were dubbed a Triple Crown, so were the American classics crystallizing into a recognized series.

Gallant Fox was not an enthusiastic workhorse, often described as lazy, but more charitably viewed as an intelligent colt who found the routine boring. Mr. Fitz figured out how to cajole him into putting forth more effort into his drills. He established a relay team of stablemates to keep Gallant Fox interested in chasing and overtaking a target, and the system proved a win-win for both: the colt had his active mind engaged, and Mr. Fitz achieved his fitness goal.

Reputed in his heyday as the best American horse since Man o’ War, “The Fox of Belair” won nine of 10 starts during his championship campaign and broke the mark for most earnings in a single season. (He could also claim, depending upon the method of calculating earnings, to be the world’s leading money-winner upon retirement).

Gallant Fox sired the next Triple Crown winner, Omaha (1935), in his very first crop. The Belair homebred was out of a high-class filly herself trained by Mr. Fitz, Flambino. The winner of the 1927 Gazelle S. and third in the Coaching Club American Oaks, Flambino was also a good third versus males in the Belmont. Omaha, by prevailing in all three classics, completed a father/son Triple Crown tandem still unique in the record book.

Although Omaha is not reckoned among the greats, he performed honorably as a four-year-old in England under the tutelage of Captain Sir Cecil Boyd-Rochfort. Omaha won two of four starts across the pond, just missing in the prestigious Gold Cup at Royal Ascot and the Princess of Wales’s Stakes at Newmarket.

Mr. Fitz and Woodward celebrated no further Triple Crowns, but they were arguably unlucky not to have more.

Right on the heels of Omaha, another homebred son of Gallant Fox, Granville, was a classic prospect in 1936. But he lost all chance at the rough start of the Derby when unseating jockey Jimmy Stout.

As usual, Mr. Fitz could not see the race amid the throngs at Churchill Downs, and unaware of what happened, he had to ask Stout where he finished. Stout, standing there with his battered face, didn’t miss a beat but said “Right here.” In keeping with his good humor, Mr. Fitz took it well, as the New York Journal-American’s Frank Graham recounted in a January 22, 1948 column.

"It wouldn't be much fun if you won all the time, would it?"

Granville at least had a chance to fire in the Preakness, where he came up just short of catching Derby winner Bold Venture. He finally got the job done, just, in the Belmont, then went on a tear to finish his career with a six-race winning streak. Granville was honored as 1936 Horse of the Year in the first formalized balloting for the title.

If Granville did not emulate Gallant Fox and Omaha as a Triple Crown winner, he did join them in the Hall of Fame. Mr. Fitz’s only classic winner not to be enshrined was Faireno, the 1932 Belmont Stakes hero. He has not endured in racing’s memory as the more celebrated Belair homebreds, but Faireno was regarded as the champion three-year-old colt of his crop.

Mr. Fitz concluded the decade with a dual classic winner in Johnstown. A son of the speedy Jamestown but from the stout family of Omaha, he was bred by Claiborne Farm’s Arthur B. Hancock Sr. from a Woodward mare. Johnstown’s dam, La France, was bred along similar lines to Omaha. By Gallant Fox’s sire *Sir Gallahad III, La France was herself a half-sister to Omaha’s dam. Woodward sold La France to Hancock, then bought her son, Johnstown, as a yearling.

Johnstown crushed the 1939 Kentucky Derby by a record-tying margin of eight lengths over Challedon. In their Preakness rematch, however, Johnstown wound up a subpar fifth behind Challedon, the pride of Maryland, in the Pimlico mud. The Belair colorbearer came roaring back to win the Withers and romp in the Belmont, neither contested by Challedon. The archrivals would trade decisions again, until Johnstown’s career was cut short. In his absence for the decisive second half, Challedon was voted divisional champion and Horse of the Year. But Johnstown’s exploits were not forgotten, and he would at last join Challedon in the Hall of Fame.

It took 16 years for Mr. Fitz to send out his next classic winner, Nashua, whose dam was by Johnstown. Originally slated to be trained in Europe, like his sire *Nasrullah, Nashua was kept stateside after the death of Woodward Sr. led to a change in plan by his son and heir, William F. Woodward Jr.

By the time Nashua arrived on the scene in the mid-1950s, Mr. Fitz was becoming progressively more and more stooped over by arthritis in his spine. He believed that the falls suffered in his early life as a jockey contributed to his condition, but he remained “Sunny Jim” to the end.

Favored to give Mr. Fitz a fourth Kentucky Derby, Nashua was floored at Churchill Downs by a flashy Californian named Swaps. As Swaps returned home, Nashua mopped up the Preakness and Belmont. Mr. Fitz, eager for a rematch, finally got it in the August 31, 1955, match race at Washington Park. Nashua vindicated his trainer’s faith by out-hustling Swaps to the early lead and holding sway en route to the Horse of the Year title.

Mr. Fitz’s 13th and final classic winner, Bold Ruler, was also a Nasrullah colt but a homebred for another great patron, Mrs. Henry Carnegie Phipps’ Wheatley Stable. The Wheatley runners had been in Mr. Fitz’s care for more than a half-century, including one future Hall of Famer they let go – Seabiscuit.

“Every time I get to feeling high and mighty about myself I always drop down a peg when I remember how I once sold Seabiscuit for $8,000," Mr. Fitz said in a 1951 Monmouth program celebrating his 77th birthday. "Charles S. Howard bought him and the horse then won more than $435,000. We'd decided to thin out the Wheatley Stable stock and Seabiscuit was one of those slated to go.”

But as ever, Sunny Jim concentrated on the good that resulted from it.

"There was some consolation later in the thought that Seabiscuit did a great deal for California racing at a time when the sport was in critical need of help on the West Coast, and I am for anything that helps racing anywhere."

Bold Ruler, a member of the legendary three-year-old class of 1957, scored his classic victory in the Preakness. Although the speedy colt was not as well suited by how the other two jewels unfolded, finishing fourth in the Kentucky Derby and third in the Belmont, he clinched Horse of the Year with a season-ending triumph over *Gallant Man and Round Table in the Trenton Handicap.

Bold Ruler’s career on the track was the prelude to an outstanding career at stud. You’ll know his best offspring – Secretariat.

In 1958, Mr. Fitz was enshrined in the Hall of Fame, one year after Gallant Fox. He kept training until a month shy of his 90th birthday, retiring in June 1963. His crippling arthritis had made it too difficult to practice his craft the way he wanted, the way he felt his owners deserved.

Mr. Fitz went out on a high note, winning a stakes race at Monmouth, the Miss Woodford, with King’s Story. He’d come full circle 73 years after riding that first winner at the old Gloucester track, also in New Jersey.

The Sage of Sheepshead Bay would come full circle for the final time upon his passing on March 11, 1966. Born on land that became part of Sheepshead Bay racecourse, he would lie in repose at a funeral home situated on the grounds of the bygone track. Across the street was St. Mark’s, also known as the boyhood church of Vince Lombardi – Mr. Fitz’s godson. Now St. Mark’s was the scene of the Solemn Mass of Requiem, attended by luminaries from the racing world.

Mr. Fitz’s Triple Crown record survived him for another 47 years, until fellow Hall of Famer D. Wayne Lukas earned his 14th classic win with Oxbow in the 2013 Preakness. That total of 14 was just equaled by Hall of Famer Bob Baffert when Justify won the middle jewel on May 19.

Baffert stands on the verge of setting a new mark of 15 classic wins. He would match another record, Mr. Fitz’s feat of training two Triple Crown winners, if Justify can scale those heights in the 150th running of the Belmont.

Perhaps Justify can summon the high spirit of his ancestors who were trained by Mr. Fitz – Bold Ruler, Nashua (and granddad Johnstown), all the way back to Gallant Fox and son Omaha, who appear in his pedigree through English Triple Crown winner Nijinsky II.

“Sunny Jim,” the soul of sportsmanship, would be the first to applaud. 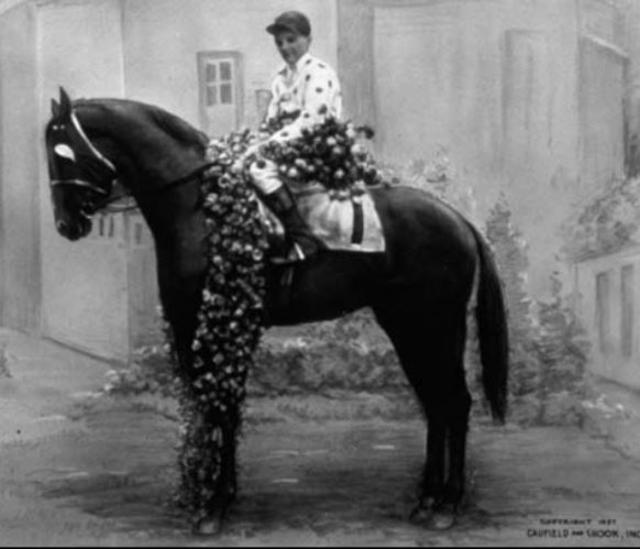