In 1995, I didn’t know all that much about horse racing. The wagering part I had a solid grasp of, but I was a novice in terms of understanding what goes into producing these remarkable Thoroughbreds, and also what it takes to get them to perform on race day. The word pedigree was a foreign term to me at the time, I had zero understanding about training patterns, and my knowledge of the sport was basically the race known as the Kentucky Derby. But a lot of that changed at Belmont Park in ‘95.

I have since attended the Breeders’ Cup on numerous occasions at venues including Santa Anita, Monmouth Park, Churchill Downs, and Keeneland, but my most memorable experience came in my first one in Elmont, New York.

The evening before the 1995 Breeders’ Cup I was watching a television interview with D. Wayne Lukas, who was the unofficial king of the sport at the time. The living legend had a resume that spoke for itself, and even I had heard of the Hall of Fame conditioner. So when he was asked about his best chance for a victory in the Cup and he replied with Hennessy in the Juvenile, I thought I had a bit of inside information!

It was the initial time that I would have the pleasure of viewing the Breeders’ Cup in person and it left an indelible mark on me. From Cigar’s superb tally in the Classic (G1) to the awe-inspiring 13 1/2-length romp by Inside Information in the Distaff (G1), the day will forever be etched in my memory.

The ‘Coach’ had a trio of prime players for the Juvenile, including Honour and Glory and Editor’s Note, but it was all about Hennessy for me. The Bob and Beverly Lewis colorbearer had already registered victories in the Hopeful (G1), Sapling (G2), and Hollywood Juvenile Championship (G2) during his 2-year-old campaign, but he was still let off at generous odds of 7-1 for his second Belmont assignment.

Moving to the fore on the backside over a rain-soaked "Big Sandy" under jockey Donna Barton (Brothers), Hennessy still held an edge in midstretch but was confronted by the brilliant Unbridled’s Song who moved through an opening on the inside. A stretch-long duel followed, with the latter getting the best of my top selection by a head in a thrilling race. (It turned out that it would not be my last losing wager).

While the day was not a profitable one for my wallet, the thrill of being at Belmont Park at my first ‘Cup and seeing so many amazing equine athletes up close, played a huge part in increasing my passion for the greatest sport on the planet. The 1995 Breeders’ Cup Juvenile was my most memorable 2-year-old race to date. 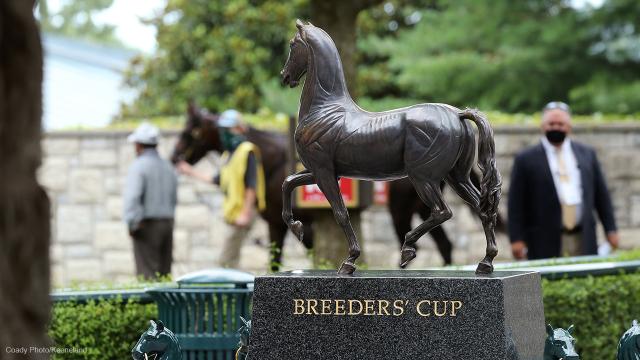