It’s a curious fact of American racing history that its greatest Thoroughbred legend, Man o’ War, didn’t contest the nation’s most celebrated race, the Kentucky Derby (G1). But in 2017, as we celebrate the centennial of Man o’ War’s birth, the blood of “Big Red” pulses through the veins, however distantly, of every single horse in Derby 143.

All but one descend from Man o’ War through the circuitous routes of the pedigree, via his daughters, his sons’ daughters, or even grandsons’ daughters, nestled deep inside the family tree. In this way such key influences as Raise a Native (sire of Mr. Prospector), Storm Cat, Danzig, Buckpasser, and Seattle Slew (who boasts several crosses of Man o’ War between his sire and dam) receive their portion.

Man o’ War’s male line still exists, although relying on a single chain that has yet to have a link weak enough to break. It appears to be forged solidly at present, its strength reinforced by a Hall of Famer still standing stud today – Tiznow, the sire of Irap, who would put an unexpected garland on the Man o’ War centenary if he can win the Derby.

As historian Kent Hollingsworth described it in The Kentucky Thoroughbred, the colt “was recognized as something apart from the start, for he had uncommonly long legs, a fiery red coat, and a presumption the world was his.”

The war altered forever the history of the globe, and the foal’s trajectory as well. In 1918, owing in part to his wartime responsibilities, Belmont dispersed nearly all his yearlings. He entertained the idea of keeping that promising chestnut, the one his wife, Eleanor Robson Belmont, had named Man o’ War in his honor. Yet he too went under the auctioneer’s hammer at Saratoga, ultimately bringing $5,000 from Samuel Riddle.

His trainer, Louis Feustel, later commented that he didn’t fill the eye at that tender stage. Hollingsworth records Feustel’s honest assessment for posterity:

“Very tall and gangling, he was thin and so on the leg as to give the same ungainly impression one gets in seeing a week-old foal.”

In his magisterial Sire Lines, Abram S. Hewitt recalled seeing the mighty champion in the Belmont Park paddock, ahead of the Futurity S. The passage of time couldn’t dim Hewitt’s memory, still conveying a sense of immediacy, a freshness:

“a magnificent, copper-colored chestnut colt, with ears pricked. He radiated majesty, energy, and power – a veritable Alexander – awaiting the moment for new worlds to conquer. It was 55 years ago, and we never saw such a sight again.”

And that was Man o’ War as a two-year-old, not even at peak maturity! The handy winner of nine of 10 starts in his 1919 juvenile campaign, while carrying 130 pounds on several occasions, he suffered his lone career defeat in the Sanford Memorial S. at Saratoga. The problematic start of the Sanford, Man o’ War’s traffic trouble on the inside, and his furious finish that fell a half-length short at the wire, contributed to the Spa’s reputation as a “graveyard” of champions. And the name of the horse who beat him passed into the sports lexicon – Upset. Man o’ War had no trouble dusting Upset in all their other meetings, past and future.

Man o’ War, who went off as the heavy odds-on favorite in each of his 21 career races, would have been the bettors’ overwhelming choice for the 1920 Kentucky Derby. But Riddle was never interested in shipping his prized colt out “west,” as the Eastern establishment viewed Kentucky. His oft-cited reason was the concern about a three-year-old having to tote 126 pounds, over 1 1/4 miles, in early May.

“How Man o’ War would have laughed had he known of his owner’s solicitude for him,” Hewitt commented.

In his absence at Churchill Downs, Paul Jones, whom Man o’ War had drubbed at two, scored a front-running 16-1 upset in the May 8 Kentucky Derby. Old foe Upset, part of the entry favored at 8-5, was beaten a head after a prolonged duel. 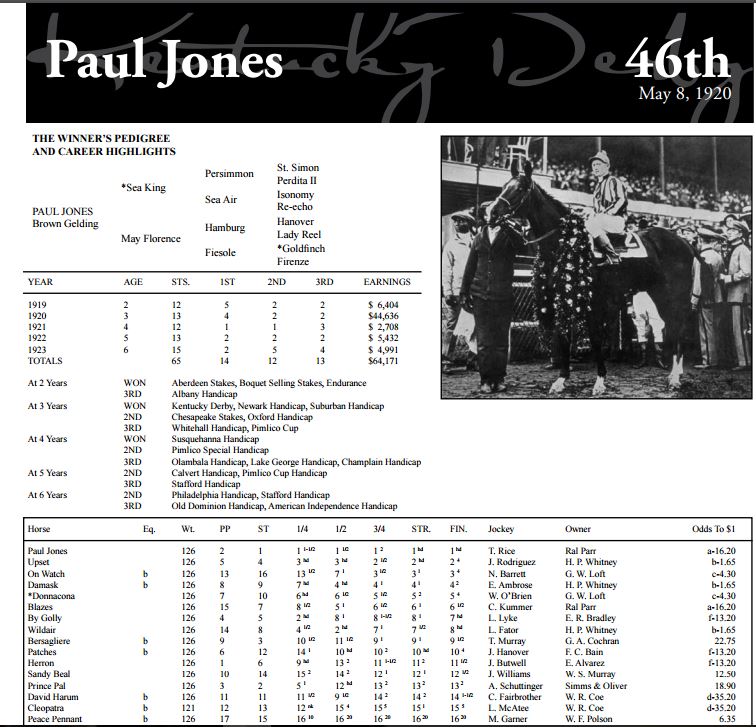 Ten days later, Man o’ War made his seasonal reappearance in the May 18 Preakness, then staged over 1 1/8 miles. If there were the slightest scruple about how he might have performed in the Derby, fans got their answer at Pimlico, as Man o’ War ran them ragged in a wire-to-wire victory. Upset and fellow Derby runner Wildair finished second and third, and thereby provided a neat tidying-up of the form.

Man o’ War took on ever greater proportions as the 1920 racing season progressed. His manner of conquest was typically to romp, with speed to spare, gearing down under the rider’s restraint. So invincible was he that his remaining races featured no more than a token opponent or two. At times he carried 131, 135, and up to 138 pounds as if they were feathery imposts.

His skein included several races that retain their ancient prestige on our contemporary calendar – the Belmont, Travers, and Jockey Club Gold Cup. He crushed the Belmont, a 1 3/8-mile classic in that era, in then-American (and world) record time. The 1 1/2-mile Jockey Club Gold Cup was accomplished in American record time at that point, and his Travers matched Saratoga’s track mark in his day. Man o’ War also set a new American mile record in the Withers, and demolished the 1 5/8-mile American (and world) record in the Lawrence Realization.

“Normally it requires two horses to break a record, one to force the other to run faster than usual. ‘Big Red’ was under no pressure to set his records; he ran fast for the sheer joy of it, and he didn’t shave or clip existing records – he shattered them.”

The one exception was the Dwyer. Although Man o’ War shouldered “only” 126 pounds, he was conceding 18 pounds to a very good colt named John P. Grier. That Whitney colorbearer ran his heart out trying to press, stay with, and challenge the great champion every step of the way through a punishing pace. John P. Grier will go down in racing history as the rival who forced Man o’ War to summon something extra. Man o’ War responded, finally subduing the Whitney colt and driving clear in what was then American (and world) record time for 1 1/8 miles. (For more details on Man o’ War’s records, see Dorothy Ours’ Man o’ War: A Legend Like Lightning, Appendix A.)

Man o’ War’s grand finale came as a match race versus 1919 Triple Crown winner Sir Barton at Ontario’s Kenilworth Park. Although Sir Barton would have been up against it in the best of circumstances, he was battling foot trouble, and therefore unable to put up meaningful resistance. Thus the Kenilworth Gold Cup, as it was known, was effectively a one-horse race, and Man o’ War obliterated the 1 1/4-mile track record.

Hewitt, ever the raconteur, shares an anecdote about a well-known betting man called Chicago O’Brien. Taking some pre-race grief for wagering $100,000 on 1-20 favorite Man o’ War, O’Brien had the perfect retort:

Footage from the match race is available in Carly Kaiser’s excellent video tribute to Man o’ War (be sure to check her YouTube channel for more):


Man o’ War retired to stud in 1921, with Riddle preferring to call time on his career rather than see him assigned staggering weights in handicaps.

Fans flocked to visit him in retirement. In later years visitors were regaled by his groom, Will Harbut, who coined the apt phrase “da mostest hoss.” Harbut and Man o’ War died a month apart in the fall of 1947.

Man o’ War ranked as a leading sire, despite the consensus view that Riddle didn’t manage his stud career to best effect. Denied the chance of Derby glory himself, Man o’ War sired two Derby winners. Both won on the front end. The first was Clyde Van Dusen (1929), a little gelding.

The next was War Admiral (1937), a Riddle homebred. Seventeen years after “Big Red,” Riddle gave War Admiral the opportunity he hadn’t given his sire. War Admiral seized it with alacrity and went on to sweep the Triple Crown. 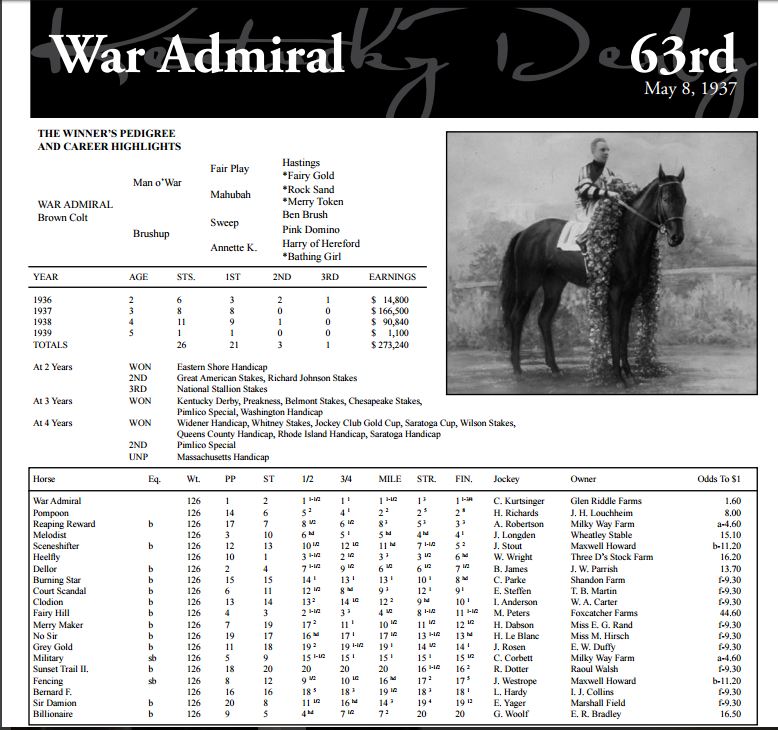 No other male-line descendant of Man o’ War has won the Derby since. A rare few have placed in the intervening 80 years. Believe It (1978) finished third to the titans Affirmed and Alydar, and Closing Argument (2005) just missed to Giacomo.

The Man o’ War sire line comes to us today via In Reality. A great-grandson of the Man o’ War stallion War Relic, In Reality was a top-class performer. He captured the 1967 Florida Derby and Fountain of Youth, didn’t contest the Derby, but finished second to Hall of Famer Damascus in the Preakness. As an older horse, In Reality landed the 1968 Carter Handicap and Met Mile. He became an influential stallion, both through his sons and his daughters. In Reality is himself the sire of Believe It, and he appears as the great-grandsire of both Closing Argument and Tiznow.

Still the only two-time Breeders’ Cup Classic (G1) winner, Tiznow came to hand too late to try the Derby trail himself. He didn’t debut until April 22, 2000, and only broke his maiden at the end of May. Tiznow has sired several Kentucky Derby runners without much luck, Colonel John faring the best of them when sixth in 2008.

Tiznow’s 2017 contender, Irap, must improve to get Man o’ War’s sire line back in the Derby winner’s circle. But maybe, just maybe, the centennial year might conjure up a little bit of the Man o’ War magic.

For more on Man o’ War’s centenary, check out these resources: 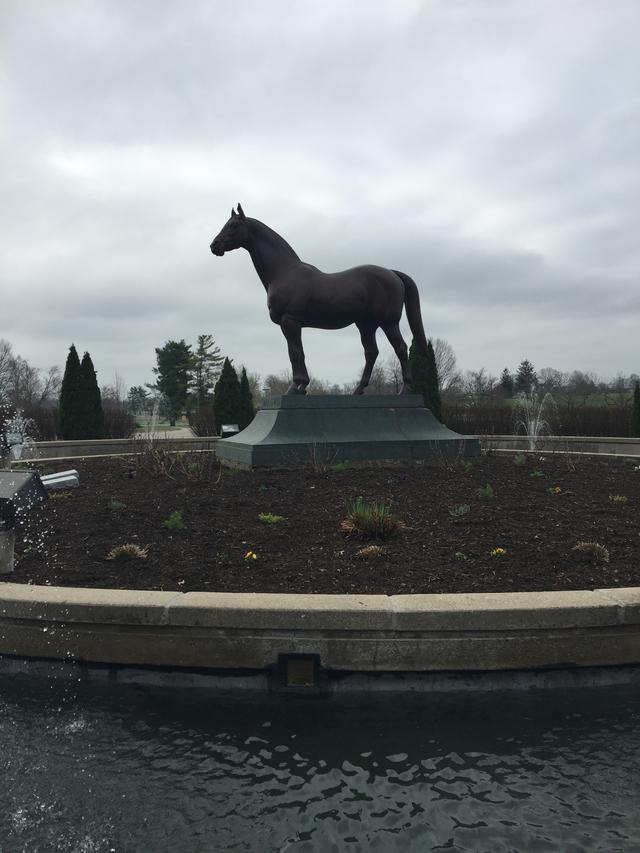