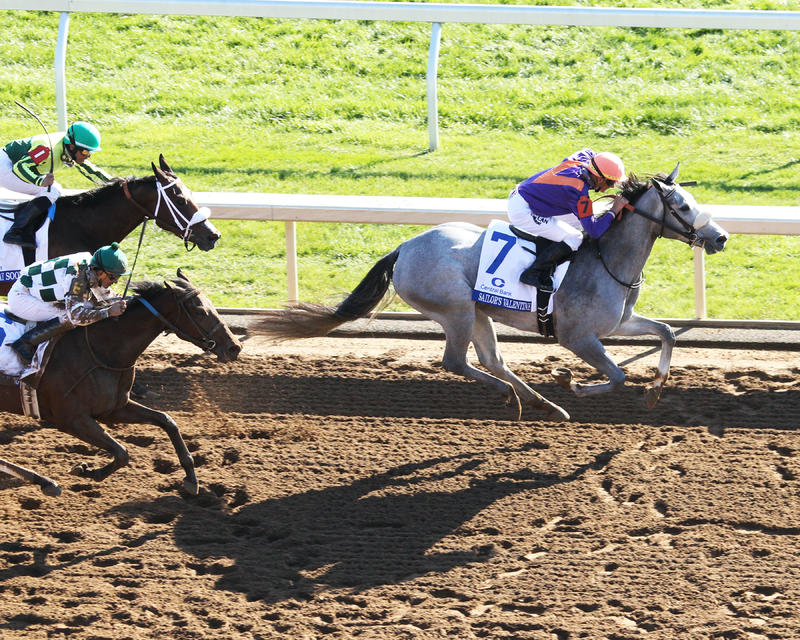 Sailor’s Valentine wasn’t given much chance in Saturday’s $500,000 Ashland Stakes (G1) at Keeneland, sent off the second longest shot in the eight-filly field at 22-1.

The Eddie Kenneally-trained miss didn’t know that, though, and posted a half-length victory under jockey Corey Lanerie to earn her shot at Kentucky Oaks (G1) glory.

The Ashland is part of the Road to the Kentucky Oaks series of points races and awarded 100-40-20-10 points to the respective top four runners toward a starting berth in the May 5 Kentucky Oaks.

Sailor’s Valentine took home the majority of those points after completing 1 1/16 miles in 1:45.54, and made her debut on the Kentucky Oaks Leaderboard in third.

Daddys Lil Darling was no stranger to the Leaderboard, having captured the Pocahontas Stakes (G2), ran second in the Alcibiades Stakes (G1), fourth in the Breeders’ Cup Juvenile Fillies (G1) and second again in the Golden Rod Stakes (G2), all last year as a juvenile. Thanks to those efforts she brought 20 points into the Ashland but could not catch Sailor’s Valentine and was forced to settle for the runner-up spot. She moved from 10th on the Kentucky Oaks Leaderboard to eighth with 60 points.

Pacesetter Someday Soon earned 20 points for her third-place run in the Ashland, good for 15th on the Leaderboard. Tapped, who boasted one point thanks a fourth-place finish in last year’s Starlet Stakes (G1), settled into 20th on the Kentucky Oaks Leaderboard with 11 total points.

Sailor’s Valentine is now 6-2-2-0, $359,214 in her career. The gray daughter of Mizzen Mast added a first stakes win to her resume here, with her prior two stakes attempts resulting in off-the-board finishes.

“We knew she liked the track. She won here in October very impressively (in her career debut on October 8). She came back here in late March and had a really good work over the track. We just decided we’d take a shot in the Ashland – mainly because she loves this track – and this is a very, very good track.”

“Certainly, if everything goes well.”

“I hadn’t been on her (in awhile). Coming into the race, he (Eddie Kenneally) said, ‘She’s doing phenomenal. I look for her to run a big race. She’s going maybe to be a longshot, but she’s not going to run like one.’ He was right.”

“It was a phenomenal trip. (The pace) was slow up front and that didn’t help me any, but she finished up well and I’m proud of her. I feel like the further (the distance) the better with her. She’s a nice filly.”

“She ran a great race. Robby did a great job on her. He just sat still and waited and waited. He just couldn’t run them down. He said if the (race were a bit longer) he probably wins by two (lengths). But we’re pleased. This is about where we wanted to be. Of course you want to win, but she’s a special filly. I’m sure she’ll go to the Kentucky Oaks – no doubt.”

“I had a very good trip. She broke right on top, and when I asked she gave me her best. She tried hard. She did everything right. She is a very trying filly.”

“We are really proud of her. The race played out the way we thought it would when we were handicapping before we entered. I am not sure about the Kentucky Oaks – that is up to the owner. I doubt she would get this kind of race set-up in the Oaks but if we are eligible (based on points), we might take a shot.” 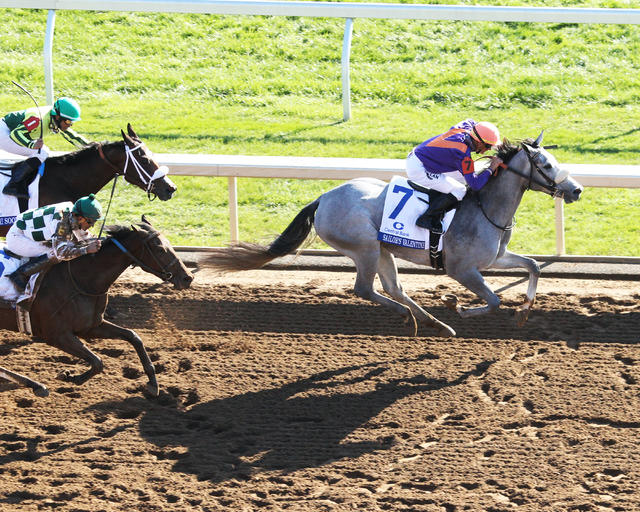