The Jeff Ruby Steaks (G3) at Turfway Park has been added as a major Kentucky Derby qualifier, awarding points on a 100-40-20-10 basis, and the top two finishers – Like the King and Sainthood – stamped their ticket.

Like the King to bring late kick to the Derby

After being angled to the outside on the far turn, Like the King closed fast to post a one-length decision. It marked the first stakes win for the Wesley Ward-trained Palace Malice colt, and Drayden Van Dyke picked up the mount.

The chestnut three-year-old has developed into a solid closer.

After breaking his maiden wire-to-wire over Belterra Park’s turf last September, Like the King brought speed to his next two engagements, including a front-running allowance decision over Turfway’s Tapeta in early December.

He switched to stalking tactics in his stakes debut next out, the Feb. 26 John Battaglia Memorial S., and rallied well for runner-up honors.

Like the King continued to show more on Saturday, overcoming a rough trip in the stretch, and the progressing colt will try to make his presence felt in the latter stages of the Kentucky Derby.

The competition will get much steeper on May 1, and Like the King must keep moving forward on a different surface.

After being well-beaten in a pair of dirt starts last year, the sophomore flourished over Turfway’s synthetic track this winter for owner M Racing Group.

He will look to follow the hoofsteps of Animal Kingdom, who parlayed his first stakes victory in the 2012 Jeff Ruby Steaks (under a former race name) into a Kentucky Derby victory five weeks later.

Animal Kingdom signaled his Kentucky Derby readiness in workouts, recording a brilliant six-furlong move at Churchill Downs in preparation for the surface switch, and Like the King will need to show the same versatility by training forwardly on dirt in the coming weeks.

After being wiped out by a wayward rival in the stretch, Sainthood regained his momentum and came flying late to get up for second.

He didn’t appear comfortable from the break, and the last-out maiden winner came under a ride on the far turn while losing positioning. The light bulb seemed to flip on once he straightened for home, and Sainthood was arguably best if he hadn’t been stopped and forced to alter paths.

The Todd Pletcher-trained colt lacked experience entering the 1 1/8-mile race, and I thought it was a huge effort in the third career start.

From the first crop of Mshawish, Sainthood has already proven himself on dirt, breaking his maiden on the Feb. 13 Risen Star undercard at Fair Grounds, and his trainer is a two-time Kentucky Derby winner.

The improving colt appears to have more upside for the Kentucky Derby than Like the King. 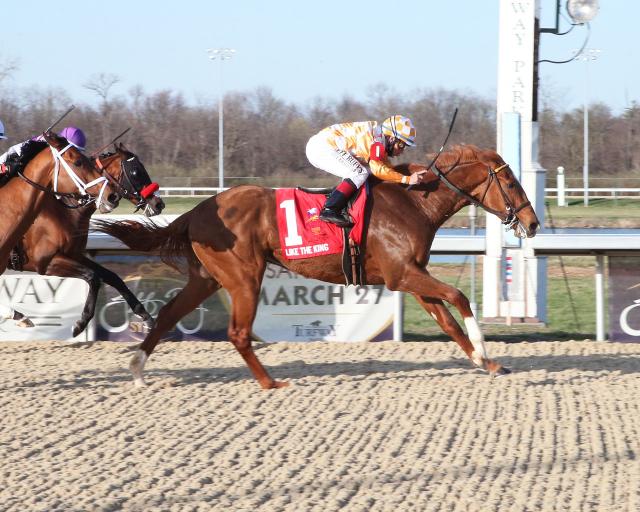