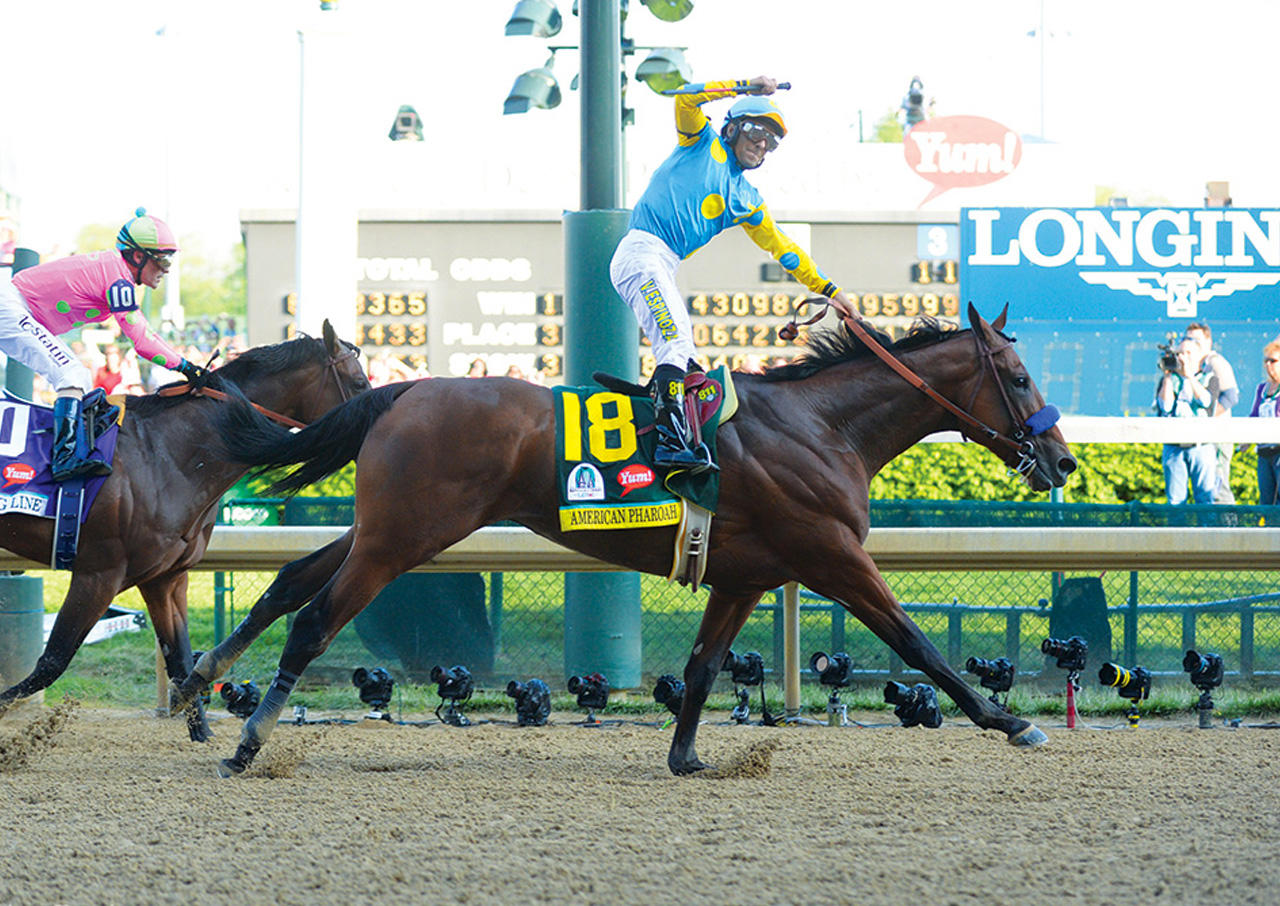 The Triple Crown is a series of three thoroughbred horse races for three-year-old horses, which take place in May and early June of each year.  The Triple Crown of horse racing is considered one of the most difficult accomplishments in horse racing, and possibly all of sports championships.  The grueling schedule requires a three year old horse to win the Kentucky Derby, then two weeks later win the Preakness Stakes, and then three weeks later win the Belmont Stakes.  In all of racing history, only thirteen horses have achieved the Triple Crown

Before a wildly jubilant crowd at Belmont Park, American Pharoah snapped a 37-year Triple Crown drought with a stylish 5 1/2-length, wire-to-wire victory in the 2015 Belmont Stakes. Hall of Fame trainer Bob Baffert marveled at the efficiency and length of the bay colt’s stride, and American Pharoah won 9-of-11 career starts with earnings of more than $8.6 million.

A Zayat Stables homebred son of Pioneerof the Nile, American Pharoah lost his first start. He broke his maiden with a 4 ¾-length score in the Del Mar Futurity (G1), and earned champion 2-year-old male honors after another convincing win in the Frontrunner (G1).

American Pharoah missed the Breeders’ Cup Juvenile (G1) due to a foot issue, and the front-running dynamo returned from a near six-month layoff with a pair of smashing victories in Oaklawn prep races. The Kentucky Derby proved to be most difficult challenge in the Triple Crown, with American Pharoah recording a hard-fought one-length decision at Churchill Downs, and he romped by seven lengths when adding the Preakness over a sloppy Pimlico track two weeks later.

Ridden by Victor Espinoza, American Pharoah easily captured the Haskell (G1) after the Belmont, but his eight-race win streak came to an end in the Travers (G1) at Saratoga. American Pharoah rebounded spectacularly in the Breeders’ Cup Classic (G1) at Keeneland, strolling home to a 6 1/2-length decision, and completed an unprecedented “Grand Slam.”