Zayat Stables’ homebred American Pharoah, ridden by now three-time Derby winner Victor Espinoza and trained by now four-time Derby winner Bob Baffert, collared leaders Dortmund and Firing Line at the head of the stretch and drew clear for a one-length victory in the 141st running of the $2,178,800 Kentucky Derby Presented by Yum! Brands (GI) on a sun-splashed afternoon before a record crowd of 170,513.

Baffert became the fourth trainer to have four Derby victories. That total moves him into a three-way tie for second behind Ben Jones’ record six Derby victories. Other trainers with four are D. Wayne Lukas and Dick Thompson.

Espinoza became the seventh rider with three Derby victories and became the sixth to record back-to-back Derby triumphs. Espinoza, who won in 2014 on California Chrome, is the first to do it since Calvin Borel in 2009 on Mine That Bird and 2010 on Super Saver.

Dortmund, ridden by Martin Garcia, and Firing Line, ridden by three-time Derby winner Gary Stevens, assumed command the first time under the wire with American Pharoah tracking to their outside.

The running order remained unchanged after fractions of :23.24, :47.34 and 1:11.29. On the far turn, American Pharoah began to creep up on the leaders and the trio hit the head of the stretch together.

Dortmund cut the corner and American Pharoah drifted wide with Firing Line in the middle. American Pharoah gradually gained the upper hand in deep stretch and pulled away to win by a length. Firing Line took second by two lengths over Dortmund who held on for third by a neck over Frosted. 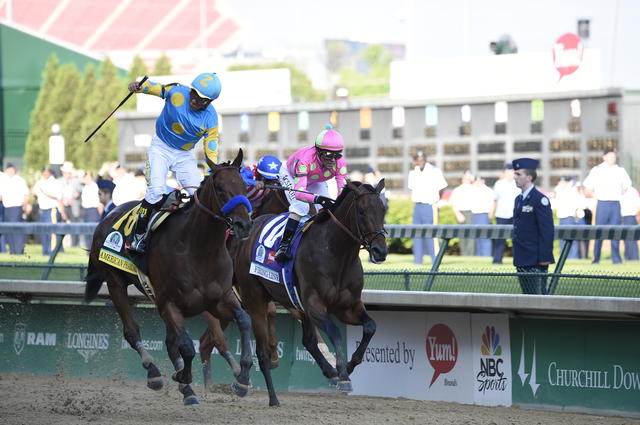