Thunder Gulch and the 1995 Eclipse Award 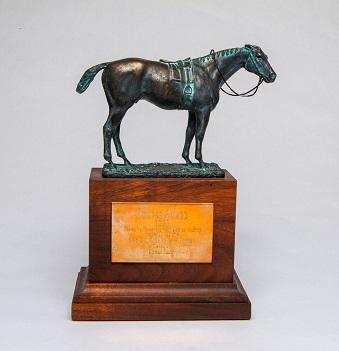 The 1995 Derby winner Thunder Gulch was one of many talented three-year-old Thoroughbreds in famed trainer D. Wayne Lukas's stable the year he won the Derby.  However, despite winning the Fountain of Youth Stakes and the Florida Derby prior to his Derby Derby victory, he was not a favorite.  In fact, his odds going off at Derby were 25 -1. Lukas thinks he was overlooked because of two other Derby talented contenders, Timber Country and Serena's Song.

In a stunning move, Thunder Gulch won the Derby by 2 1/4 lengths.  The colt went on to finish third in the Preakness and claim victory in the Belmont Stakes.  After completing the Triple Crown challenge, Thunder Gulch won the Swaps Stakes, Traverse Stakes and the Kentucky Cup Classic Handicap. These noteworthy wins during the 1995 season earned Thunder Gulch that year's coveted Champion Three-Year Old Male Eclipse Award. Above is a photo of his trophy for the Eclipse Award, which comes from Lucas's impressive personal collection. The trophy is now on display at the Kentucky Derby Museum, and certainly worth a visit if you're in town.