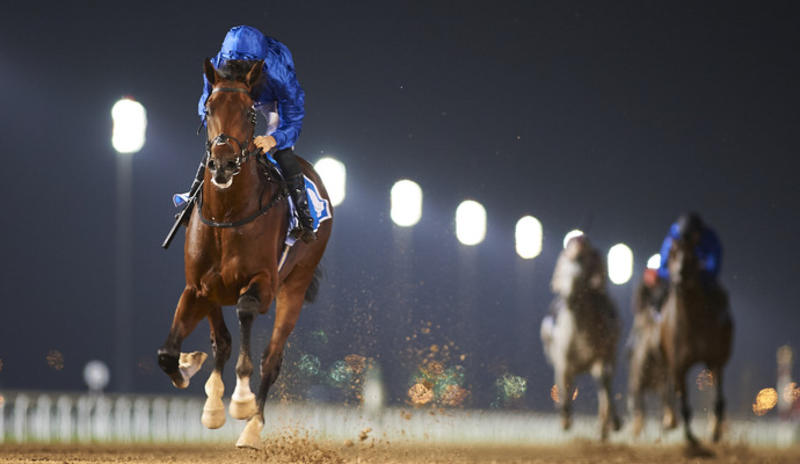 Godolphin's Thunder Snow (Ire), a dominant winner of the UAE 2000 Guineas at Dubai's Meydan Racecourse, heads six 3-year-olds on the roster of late nominations to the races of the 2017 Triple Crown. (Dubai Racing Club, Andrew Watkins)

Godolphin’s Thunder Snow (Ire), winner of the UAE 2000 Guineas (Group 3) at Dubai’s Meydan Racecourse on Feb. 11 and last fall’s Criterium International (G1) at France’s Saint-Cloud, heads a group of six 3-year-old Thoroughbreds made eligible to compete in the races of the 2017 Triple Crown during the series’ late nomination phase that closed on Monday, March 20.

Late nominations to the Triple Crown required a payment of $6,000 for each nominated 3-year-old. The early nomination period, during which 419 horses were made eligible for the three-race series, closed Jan. 14 and required payment of $600.

The Saeed bin Suroor-trained Thunder Snow is the most accomplished of the late Triple Crown nominees. His stakes triumphs – a 5 ¾-length victory in his dirt debut in the UAE 2000 Guineas and a five-length victory over soft turf at Saint-Cloud – have come in his past two starts. The son of the Australian sire Helmet has a career record of 3-2-0 in seven races with earnings of $427,692. Thunder Snow is scheduled to face 15 rivals in Saturday’s $2 million UAE Derby (G2) at Meydan.