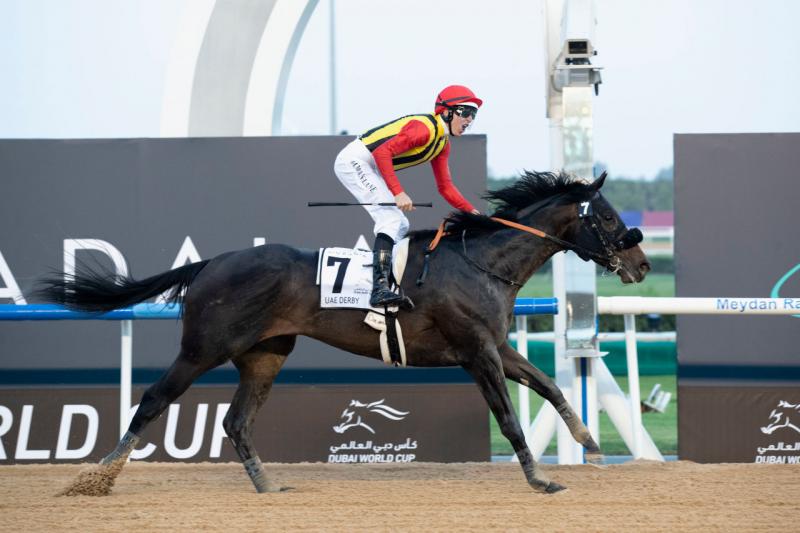 Crown Pride is inbred to Sunday Silence and Mr. Prospector (Dubai Racing Club)
As a colt from Japan who won the UAE Derby (G2) on Dubai World Cup night, Crown Pride brings international flair to the Kentucky Derby (G1). But his pedigree sports familiar influences, including duplications of supersires Sunday Silence and Mr. Prospector.
Here are his pedigree fun facts:
1. Sire Reach the Crown features American Triple Crown connections.
Crown Pride is by Reach the Crown, a paternal grandson of 1989 Kentucky Derby and Preakness (G1) legend Sunday Silence, whose Triple Crown bid was foiled by archrival Easy Goer in the Belmont (G1). Reach the Crown is out of Crownpiece, a well-named mare given her close connections to American Triple Crown winners. Her sire is 1977 Triple Crown sweeper Seattle Slew, and her dam, multiple Grade 1 vixen Classic Crown, is by Mr. Prospector and out of Six Crowns.
As her name implies, Six Crowns is a daughter of triple classic winners – 1973 legend Secretariat and Chris Evert, who took New York’s Filly Triple Crown consisting of the Acorn (G1), Mother Goose (G1), and Coaching Club American Oaks (G1) in 1974.
In addition to Classic Crown, Six Crowns produced champion Chief’s Crown, winner of the inaugural Breeders’ Cup Juvenile (G1) in 1984. Chief’s Crown has a more dubious distinction of being the beaten favorite in all three jewels of the 1985 Triple Crown, coming closest in the Preakness while checking in third in the Kentucky Derby and Belmont. From this same immediate family comes Winning Colors, who beat the boys in the 1988 Kentucky Derby.
2. Reach the Crown was runner-up in the 2009 Japanese Derby.
Reach the Crown competed in all three jewels of Japan’s Triple Crown in 2009 – on turf. Other differences from the U.S. Triple Crown, aside from surface, is that the Japanese classics are spaced from spring to fall, and the final leg is held at about 1 7/8 miles.
In the first leg, the Satsuki Sho at about 1 1/4 miles at Nakayama, Reach the Crown faded to 13th. But he went much closer when runner-up in the second leg, the about 1 1/2-mile Tokyo Yushun (Japanese Derby). After his summer holiday, Reach the Crown resumed with another second in the Kobe Shimbun Hai, a prep for the third jewel. In that final and longest classic, the Kikuka Sho (Japanese St Leger), Reach the Crown led as the favorite, but succumbed in deep stretch and wound up fifth. He would go on to earn his biggest win in the 2010 Yomiuri Milers Cup. 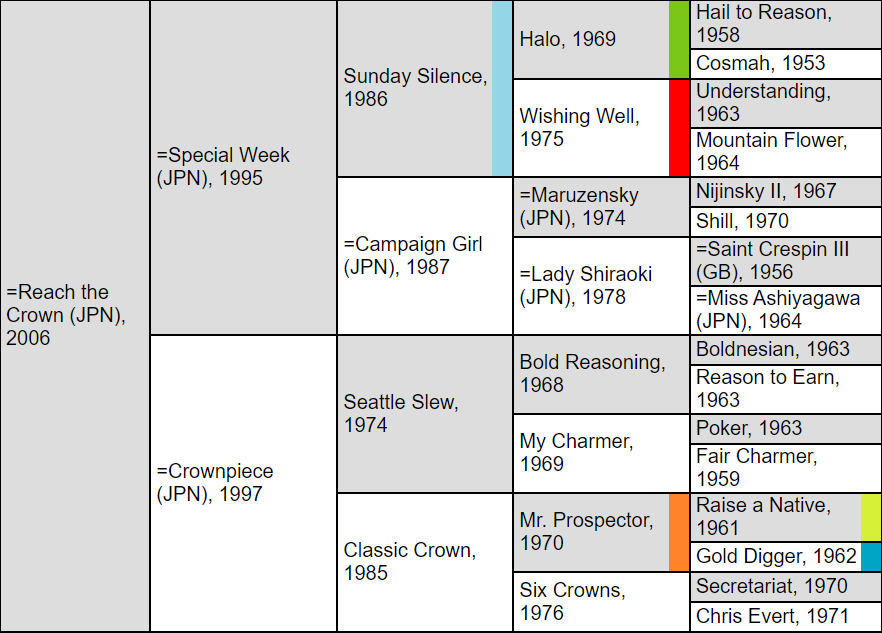 Reach the Crown is by Special Week, a son of Sunday Silence who was favored in all three jewels of the Japanese Triple Crown in 1998. The hero of the Japanese Derby, Special Week also placed third in the Satsuki Sho and second in the Kikuka Sho. He excelled as a four-year-old in 1999, winning the Japan Cup and turning a prestigious double in both versions of the Tenno Sho (“Emperor’s Prize”). Special Week captured the Tenno Sho Spring (at about two miles at Kyoto) and Autumn (at about 1 1/4 miles at Tokyo in a then-record time of 1:58.0).

Crown Pride’s dam is by champion King Kamehameha, who blazed to victory in the 2004 Japanese Derby in 2:23.3, then a stakes record. King Kamehameha was coming off a blistering win in the NHK Mile Cup, also at Tokyo, in 1:32.5. Boasting a 7-for-8 career record, he unfortunately had to retire due to injury in the fall of his sophomore season.

Special Week sired Buena Vista, Japan’s 2010 Horse of the Year and a champion in all four seasons of racing. The winner of two fillies’ classics, Buena Vista defeated males in such major events as the Japan Cup and Tenno Sho Autumn.

5. King Kamehameha has left a legacy on turf and dirt.
Furnishing an outcross for the Sunday Silence-laden bloodstock in Japan, King Kamehameha proved to be an outstanding sire. His turf legacy is secured by brilliant Horse of the Year Lord Kanaloa (himself the sire of the great distaffer Almond Eye), Japanese Fillies’ Triple Crown heroine Apapane, and Japanese Derby winners Duramente (2015) and Rey de Oro (2017). King Kamehameha has also sired Japanese champions on dirt, including Chuwa Wizard, who has placed in the past two runnings of the Dubai World Cup (G1).
King Kamehameha’s daughters are extending his influence as well. He factors as the broodmare sire of the champion white filly Sodashi; Fillies’ Triple Crown winner Daring Tact; and Stay Foolish, winner of the recent Dubai Gold Cup (G2) and Red Sea Turf H. (G3). 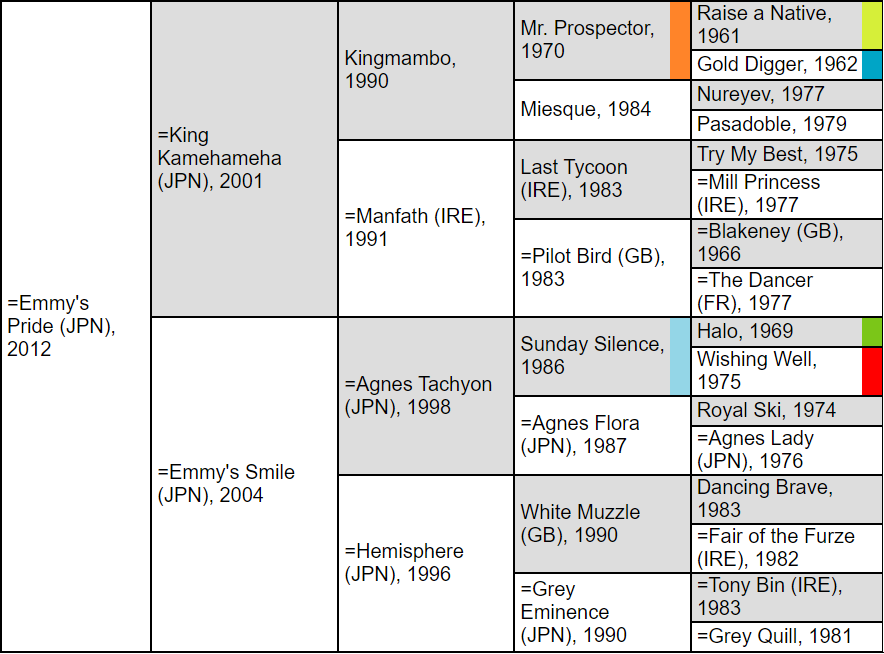 King Kamehameha is a half-brother to The Deputy, a prominent player on the 2000 Kentucky Derby trail. Second to Fusaichi Pegasus in the San Felipe (G2), The Deputy won both the Santa Catalina (G2) (now known as the Robert B. Lewis) and the Santa Anita Derby (G1). He didn’t run up to that level at Churchill Downs, reporting home 14th in the Kentucky Derby.
The Deputy and King Kamehameha were produced by Manfath, a daughter of 1986 Breeders’ Cup Mile (G1) winner Last Tycoon. King Kamehameha has a Breeders’ Cup Mile legend on his sire’s side. He is by Kingmambo, the multiple Group 1-winning son of Mr. Prospector and two-time Mile queen Miesque.
“Mr. P” therefore appears twice in Crown Pride’s pedigree, via broodmare sire King Kamehameha and through sire Reach the Crown.
7. Crown Pride’s second dam is by an unbeaten son of Sunday Silence.
In addition to appearing as the patriarch of Crown Pride’s male line, Sunday Silence counts again in the maternal half of his pedigree. Crown Pride’s dam, Emmy’s Pride, is herself out of Emmy’s Smile, by the Sunday Silence stallion Agnes Tachyon. Thus Crown Pride is inbred 3x4 to Sunday Silence.
A perfect 4-for-4, Agnes Tachyon captured the 2001 Satsuki Sho. Agnes Tachyon’s dam, champion Agnes Flora, was a classic winner too, in the 1990 Oka Sho (Japanese 1000 Guineas).
8. Crown Pride’s third dam is by a high-class son of Dancing Brave.
Emmy’s Smile is out of Hemisphere, by White Muzzle, a son of all-time great European champion Dancing Brave. White Muzzle conquered the 1993 Italian Derby (G1) by five lengths and placed in championship races won by his sire. Twice runner-up in the King George VI & Queen Elizabeth (G1) at Ascot, he missed by only a neck in the Prix de l’Arc de Triomphe (G1) – to Urban Sea, now immortal as the dam of Sea the Stars and Galileo.
9. Crown Pride’s fourth dam is by 1988 Arc winner Tony Bin.
Hemisphere is out of Grey Eminence, a daughter of Tony Bin, who scored his signature win in the 1988 Arc. The multiple Group 1-winning Italian champion became a top sire in Japan, with such progeny as Horses of the Year Jungle Pocket and Air Groove. Tony Bin is also the broodmare sire of Japanese champions Heart’s Cry, Curren Chan, Transcend (on dirt), and Admire Groove (one of the major winners out of Air Groove).
10. This American female line traces to champion Quill.
Crown Pride’s fifth dam, Kentucky-bred Grey Quill, was exported to Japan. Her female line descends from Quill, the champion two-year-old filly of 1958 who added the 1959 Acorn and Mother Goose at three and the rich Delaware H. at four in 1960.
By the key *Princequillo and out of a mare by 1943 Triple Crown conqueror Count Fleet, Quill became an influential broodmare. She foaled Canadian champion One for All and Caucasus, a multiple Grade/Group 1 winner from Ireland to Southern California. Quill’s grandsons include U.S. turf champ Run the Gantlet and Japanese champion Maruzensky, who shows up as the broodmare sire of Special Week.
Quill’s granddam, Alms, won the 1939 Pimlico Oaks and placed second in the Louisiana Derby. Alms is a three-quarter sister to Hall of Famer Twenty Grand, who captured the 1931 Kentucky Derby, Belmont, and Travers during his Horse of the Year campaign. Tracing the matrilineal line further back, this is the 5-g family responsible for fellow Kentucky Derby winners Elwood (1904) and Sir Huon (1906). 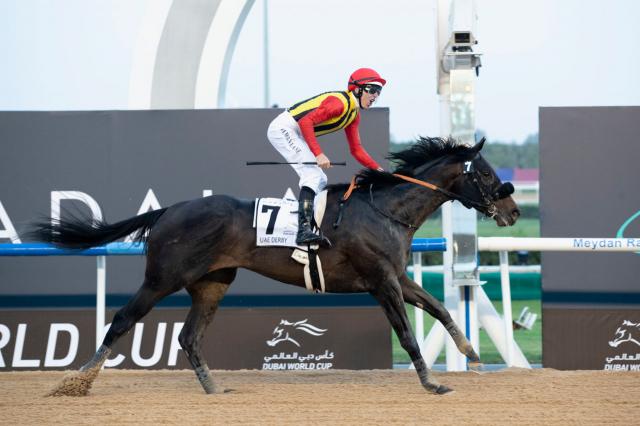