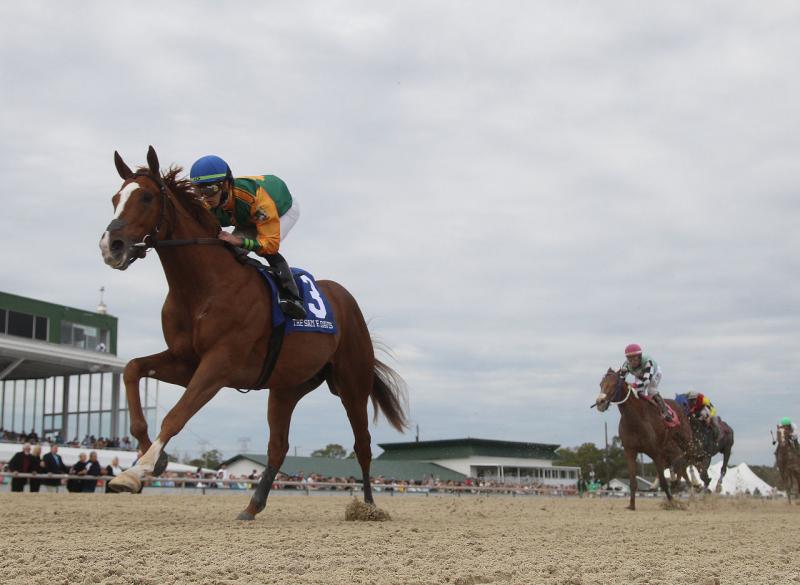 Giant’s Causeway passed away in April 2018, but the “Iron Horse” remains a force in pedigrees. His influence on the 2022 Triple Crown trail extends through generations – his young son Not This Time is an up-and-comer in the stallion ranks, and record-setting first-crop sire Gun Runner is out of a Giant’s Causeway mare.

The final crop by Giant’s Causeway, just three foals, arrived posthumously in the spring of 2019. The odds of one of those colts becoming a Kentucky Derby (G1) contender were slim, and the possibility that he could have two on the trail was even more remote.
Yet just as Giant’s Causeway battled to the end of every race, so has the great-hearted champion delivered a rousing conclusion to his stud career. He’s achieved the wildly improbable feat of siring Classic Causeway, who dominated the Sam F. Davis (G3), and Breeders’ Cup Juvenile (G1) third Giant Game. His other colt, Shadwell homebred Monaadah, is in training with Saeed bin Suroor in Dubai.
Here are the pedigree fun facts for Classic Causeway:
1. Kentucky-bred Giant’s Causeway was a superstar in Europe for Aidan O’Brien. The robust chestnut was unbeaten as a juvenile, with the Prix de la Salamandre (G1) his top highlight of 1999, but his 2000 campaign made him an icon. After suffering his first two losses when runner-up in the 2000 Guineas (G1) at Newmarket and the Irish equivalent, Giant’s Causeway went on a five-race winning spree over the summer to merit his “Iron Horse” nickname.
That rapid-fire sequence came in marquee events, all by narrow margins, from mile features like the St James’s Palace (G1) at Royal Ascot and the Sussex (G1) at Glorious Goodwood, to such prizes in the vicinity of 1 1/4 miles as the Eclipse (G1), Juddmonte International (G1), and Irish Champion (G1). Giant’s Causeway nearly lifted the Breeders’ Cup Classic (G1) in his only dirt try, and grand finale, and it took a Hall of Famer in Tiznow to deny him.
2. Giant’s Causeway transmitted his ability at stud, siring U.S. Horse of the Year Bricks and Mortar; fellow European champion Shamardal, a top stallion in his own right; Grade 1-winning sires Eskendereya, First Samurai, Creative Cause, Carpe Diem, and Brody’s Cause, all prominent on the Derby trail in their respective years; Protonico, sire of Medina Spirit, first across the wire in the 2021 Kentucky Derby; Breeders’ Cup Juvenile Fillies (G1) champ Take Charge Brandi, dam of current Jerome S. winner Courvoisier; and 2016 Belmont (G1) near-misser Destin, who came closest to giving Giant’s Causeway a U.S. classic winner.
3. From the breed-shaping sire line of 1964 Derby star Northern Dancer, Giant’s Causeway represents the Storm Cat branch. Storm Cat excelled in his two-year-old campaign, when just nailed on the line in the 1985 Breeders’ Cup Juvenile. His own sire, the Northern Dancer stallion Storm Bird, was an unbeaten champion juvenile in England and Ireland in 1980. 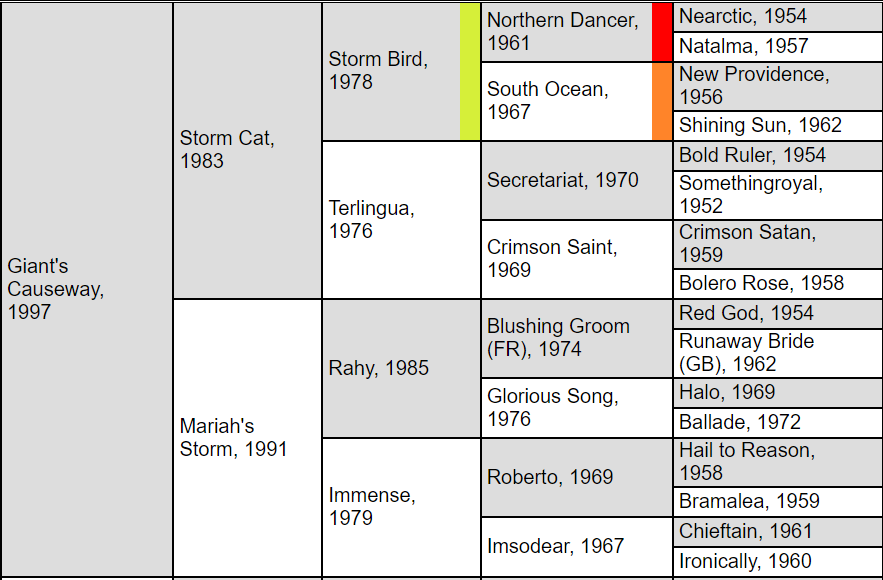 4. Giant’s Causeway’s dam, Mariah’s Storm, was the inspiration for the movie Dreamer. The winner of the Arlington-Washington Lassie (G2) at two, Mariah’s Storm returned from a career-threatening injury to add more graded laurels to her resume at three and four. She captured seven more stakes, notably the 1995 Falls City H. (G2) at Churchill Downs and Turfway Breeders’ Cup H. (G2), as well as a pair of Grade 3s at Arlington, and the 1994 Mrs. Revere on the Churchill turf. Admirably consistent throughout her career, Mariah’s Storm bankrolled $724,895 from her 16-10-2-1 record.

6. Mariah’s Storm’s pedigree replicates the patterns of breeding responsible for other major winners in preceding years. She is closely related to multiple French Group 2 hero Panoramic, runner-up in the 1991 Rothmans International (G1). Both were by sons of Blushing Groom and out of Grade 3 winner Immense. Mariah’s Storm is by Rahy, whose dam is Canadian Hall of Famer Glorious Song. Immense is a half-sister to Dearly Precious, the champion two-year-old filly of 1975, and she is also a near relative of Irish champion juvenile filly Sookera. Both Immense and Sookera are daughters of 1972 Epsom Derby victor Roberto (the only horse ever to defeat British all-time great Brigadier Gerard) from the same immediate family. 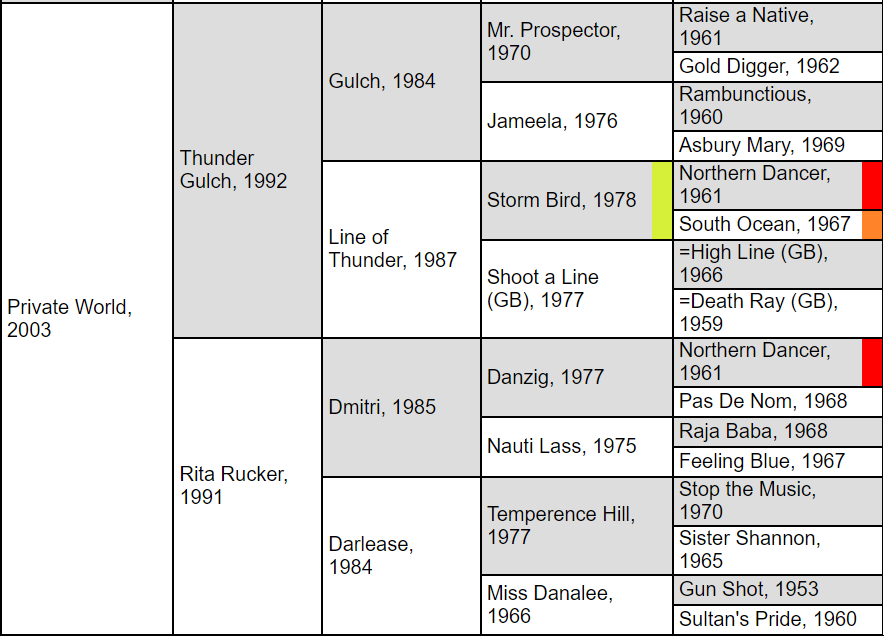 7. Classic Causeway is out of a mare by Thunder Gulch, the 1995 Kentucky Derby and Belmont champion. Just three-quarters of a length away from the Triple Crown when third in the Preakness (G1), Thunder Gulch sired another member of the “two-thirds” club in Hall of Famer Point Given. After a subpar fifth in the 2001 Derby, Point Given conquered the Preakness and Belmont.

8. Thunder Gulch is by the Mr. Prospector stallion Gulch and out of the Group 1-placed Storm Bird mare Line of Thunder. Because Storm Bird factors as the broodmare sire of Thunder Gulch, as well as the grandsire of Giant’s Causeway, Classic Causeway is inbred to him.

9. Classic Causeway’s dam, multiple stakes victress Private World, began her career with a three-race winning streak in sprints. Rallying from well back to win going away on debut at Del Mar, she forced the pace and edged clear in the 2005 Anoakia S., then bravely wired the Moccasin S. Private World raced only twice as a sophomore in 2006, but added a runner-up effort in the 1 1/16-mile California Oaks at Golden Gate.

10. Private World is out of the hardy Arkansas-bred Rita Rucker, who won 21 of 72 lifetime starts over seven seasons, from five furlongs to 1 1/16 miles, on both dirt and turf. Four of those wins came in minor handicaps at Mountaineer that didn’t count as “black type” stakes. Rita Rucker’s sire, Dmitri, is himself an obscure son of Danzig bred in Arkansas. Her broodmare sire, however, is Temperence Hill, the 1980 Belmont S. hero and champion three-year-old colt.

12. This female line belongs to the family labeled 9-f, responsible for two Kentucky Derby winners in champion Bold Forbes (1976) and the promoted Country House (2019). Bold Forbes and Country House share an ancestress from the late 19th century (The Apple), while Classic Causeway descends from a common matron even further back, The Toxophilite mare, foaled in 1861. This is the branch via her granddaughter Astrology, the dam of leading sire *Star Shoot, who is remembered now for siring the first Triple Crown winner Sir Barton (1919). Classic Causeway’s 11th dam, L’Etoile, is a full sister to *Star Shoot.