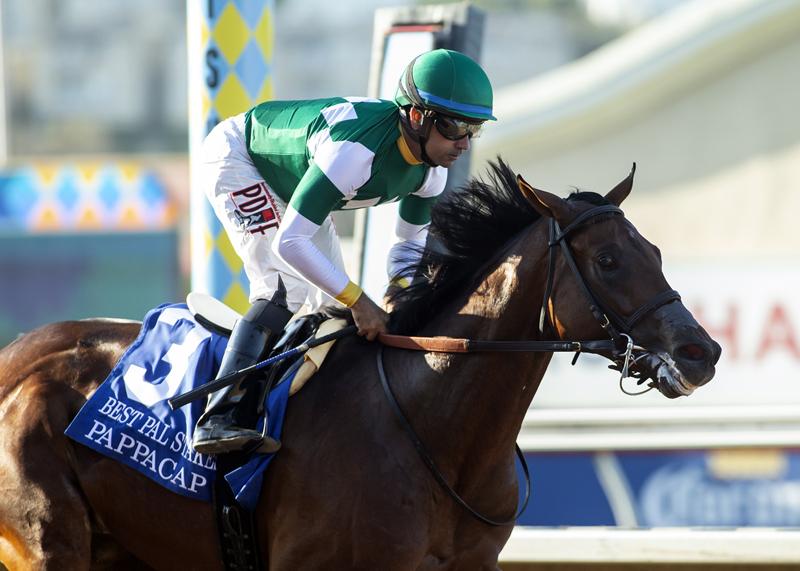 What can Horse of the Year Gun Runner do to follow up his record-setting season as a freshman sire? After rocketing to the top of the juvenile sire charts with more than $4 million in progeny earnings – a North American record for a first crop – he has prominent players on the Kentucky Derby (G1) and Oaks (G1) trails.

At this writing, Gun Runner is responsible for both the Derby and Oaks points leaders. While his Breeders’ Cup Juvenile Fillies (G1) champion Echo Zulu ranks as clearly best of the Oaks contenders, Breeders’ Cup Juvenile (G1) runner-up Pappacap holds a more tenuous position in the Derby picture. But we might not have seen the best of him yet, and his comeback in the Jan. 22 Lecomte (G3) at Fair Grounds will tell us more.
Here are 12 fun facts about Pappacap’s pedigree, to follow up on his "Tales from the Crib."
1. Gun Runner was himself a star on the Fair Grounds Road to the Kentucky Derby in 2016, winning both the Risen Star (G2) and Louisiana Derby (G2). Third in the Kentucky Derby and Travers (G1), Gun Runner ended his sophomore campaign on the upswing by beating elders in the Clark (G1). He reached the peak of his powers, however, as an older horse. Gun Runner swept his last five in a row, including the 2017 Breeders’ Cup Classic (G1) and 2018 Pegasus World Cup (G1), and retired with almost $16 million in earnings.
2. Gun Runner’s sire, Candy Ride, was an undefeated champion in Argentina who retained his perfect record stateside. Equally devastating on dirt and turf, Candy Ride famously beat Medaglia d’Oro in the 2003 Pacific Classic (G1). His time for 1 1/4 miles, 1:59.11, remains the track record at Del Mar. Candy Ride transmitted his ability to Gun Runner and such fellow champions as Shared Belief and Game Winner. Another exceptional son, Mastery, could have been the best of the 2017 Derby hopefuls but sustained a career-ending injury when romping in the San Felipe (G2).
3. Candy Ride descends from the sire line of Hall of Famer Native Dancer, whose only career loss was a troubled near-miss in the 1953 Kentucky Derby. That head margin deprived him of the Triple Crown, for he went on to win the Preakness and Belmont. Beloved as the “Gray Ghost,” Native Dancer became an influential sire. His unbeaten son, Raise a Native, established a dynasty proliferated by Mr. Prospector.
4. Candy Ride traces to the Mr. Prospector stallion Fappiano – not through the line of the Derby-winning Unbridled, but via another Fappiano son, Cryptoclearance. A $3.3 million-earner and multiple Grade 1 winner, Cryptoclearance was fourth in the 1987 Derby, third in the Preakness, and second in the Belmont. He sired Ride the Rails, runner-up to Holy Bull in the 1994 Florida Derby (G1), and now better known as the sire of Candy Ride.
5. Gun Runner’s dam, Grade 2 victress Quiet Giant, won seven of 12 career starts. Excelling as a four-year-old, she dominated a pair of Aqueduct stakes in the winter of 2011 and saved her best for her final two outings at Monmouth Park that summer. Quiet Giant crushed the Lady’s Secret S. by 6 3/4 lengths and rolled by five in the Molly Pitcher (G2). 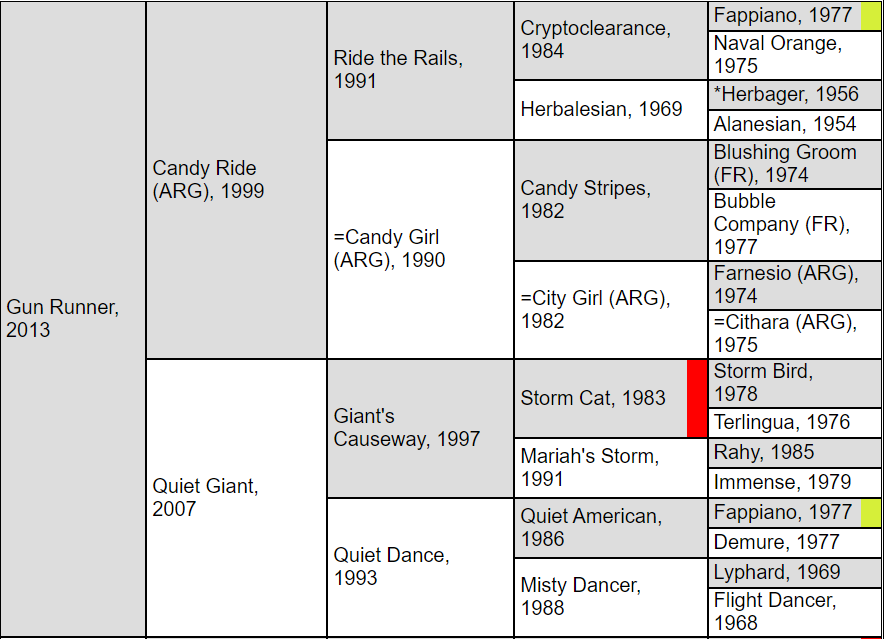 6. Quiet Giant is an exquisitely-bred half-sister to Horse of the Year Saint Liam, who clinched top honors in the 2005 Breeders’ Cup Classic. A daughter of “Iron Horse” Giant’s Causeway, Quiet Giant is also a half to five other stakes performers, most notably 2018 United Nations (G1) upsetter Funtastic. They are all out of Grade 2-placed Quiet Dancer, by Quiet American. (Because Quiet American is yet another son of Fappiano, Gun Runner is inbred to that superb stallion.) Quiet Dancer’s ancestress, Hall of Famer Gallorette, hails from the same female line as 1935 Triple Crown winner Omaha along with fellow Hall inductee Johnstown.

7. Pappacap is out of a mare by Scat Daddy, the sire of 2018 Triple Crown champion Justify. Scat Daddy raced exclusively on dirt, with his biggest wins coming in the 2006 Champagne (G1) and 2007 Florida Derby. But the son of transatlantic champion Johannesburg has sired top turf performers as well, including Royal Ascot celebrities Lady Aurelia, No Nay Never, and Caravaggio. Pappacap’s dam, Pappascat, is among Scat Daddy’s turf performers as she placed in the 2014 Cardinal (G3) at Churchill Downs. 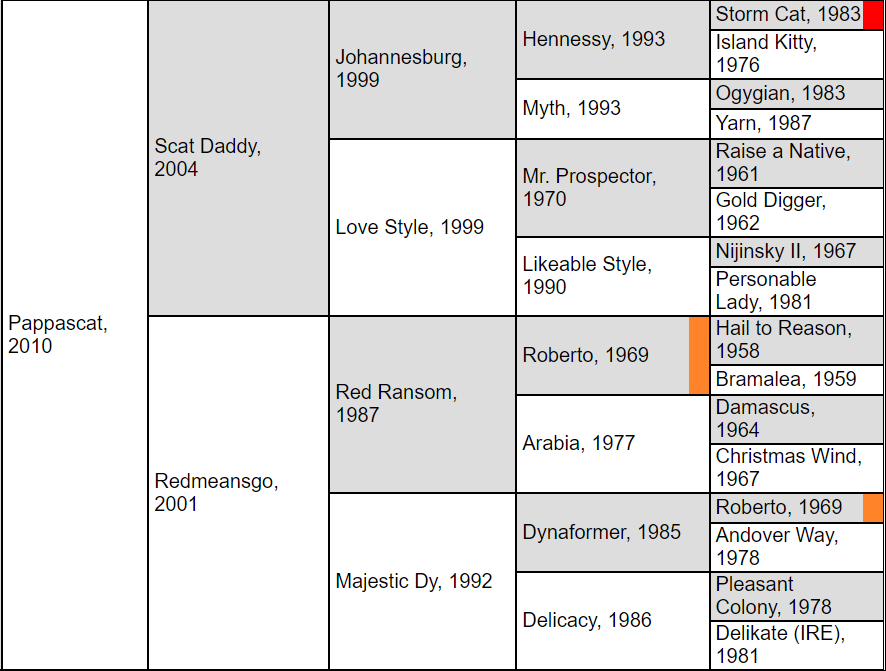 9. Pappascat’s dam, Redmeansgo, is closely inbred to Roberto. The 1972 Epsom Derby winner named after baseball legend Roberto Clemente, Roberto handed the great Brigadier Gerard his only career loss in the Benson & Hedges Gold Cup. He factors on the paternal side in both halves of Redmeansgo’s pedigree. Her sire, Red Ransom, and broodmare sire, Dynaformer, are sons of Roberto. Dynaformer is best known for siring 2006 Kentucky Derby hero Barbaro.

10. Redmeansgo is in turn out of a closely inbred mare, Majestic Dy, who counts His Majesty twice in her immediate ancestry. Majestic Dy’s sire, Dynaformer, was produced by a His Majesty mare. And Majestic Dy’s dam is by His Majesty’s son Pleasant Colony, the 1981 Kentucky Derby and Preakness conqueror. His Majesty is himself a full brother to the gifted Graustark, both by unbeaten European great *Ribot and out of 1956 Delaware H. winner Flower Bowl.
11. Pappacap’s fifth dam, Delikate, is by General Assembly, Secretariat’s son who set a Saratoga track record in the 1979 Travers. She hails from the family of Irish champion two-year-old colt Godswalk.
12. Diving further back, the female line traces to the high-class British filly Sandiway (foaled 1881), whose major wins include the 1884 Coronation S. at Royal Ascot. Among her American descendants are two-time Jockey Club Gold Cup champion Dark Secret (1933-34); back-to-back Travers scorers Lady Rotha (1915) and Spur (1916); and 1914 Belmont victor Luke McLuke. 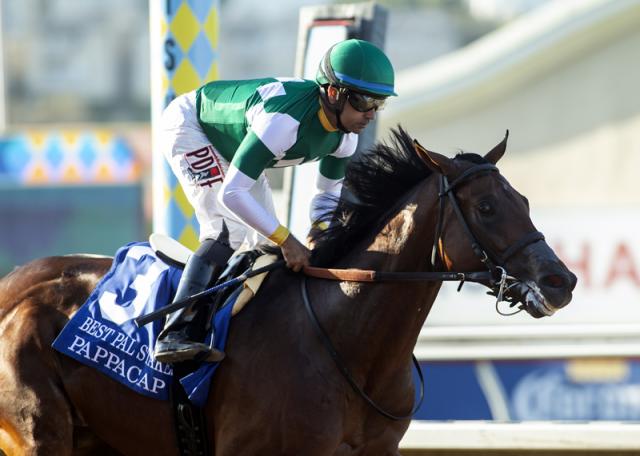