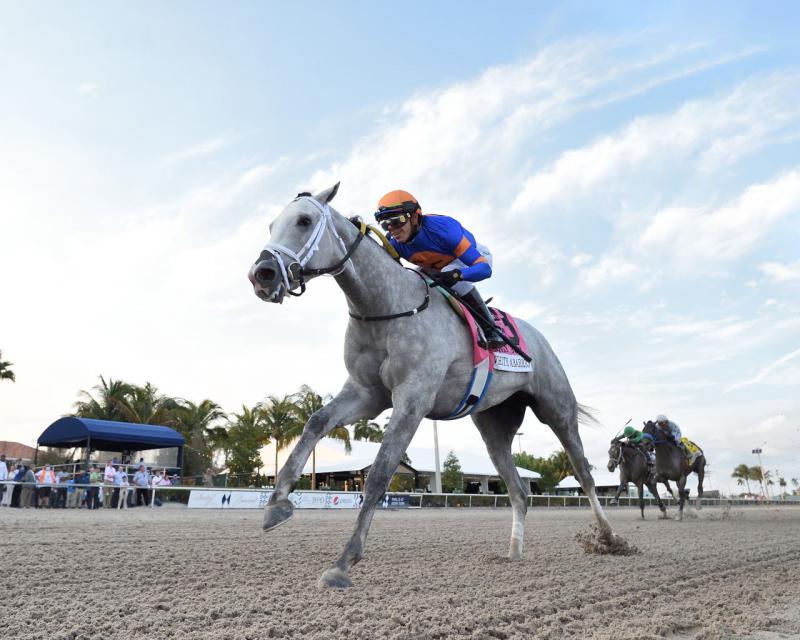 White Abarrio is a grandson of North America’s pre-eminent sires of recent years, Tapit and Into Mischief. As you might have guessed, Tapit is the source of his bright gray coat.

Here are his pedigree fun facts:
1. White Abarrio’s sire, Race Day, is an accomplished son of Tapit. The winner of six of his 12 career starts, Race Day didn’t make it to the races until the second half of his sophomore year. But the gray developed into a graded stakes performer as a four-year-old for Todd Pletcher. Turning the Razorback H. (G3)/Oaklawn H. (G2) double in the spring of 2015, Race Day added the 1 1/8-mile Fayette (G2) in track-record time during Keeneland’s fall meet.
2. Race Day was exported to Korea in late 2020 after initially standing at Spendthrift Farm, the home of Into Mischief. That’s a trend for young stallions who haven’t had a breakout performer in the first couple of crops. For example, Daredevil and Take Charge Indy were sold before their top runners made the scene, and both were subsequently repatriated. Race Day is on the map now, not only with White Abarrio, but also Barber Road, the hard-charging second in the Smarty Jones S. and Southwest (G3).
3. Tapit is well known to fans of the Triple Crown trail, especially for siring a record-tying four Belmont S. (G1) winners, most recently Essential Quality (2021). Upholding the male line of 1977 Triple Crown legend Seattle Slew, via Hall of Famer A.P. Indy and Pulpit, Tapit has yet to come up with a Kentucky Derby (G1) winner. 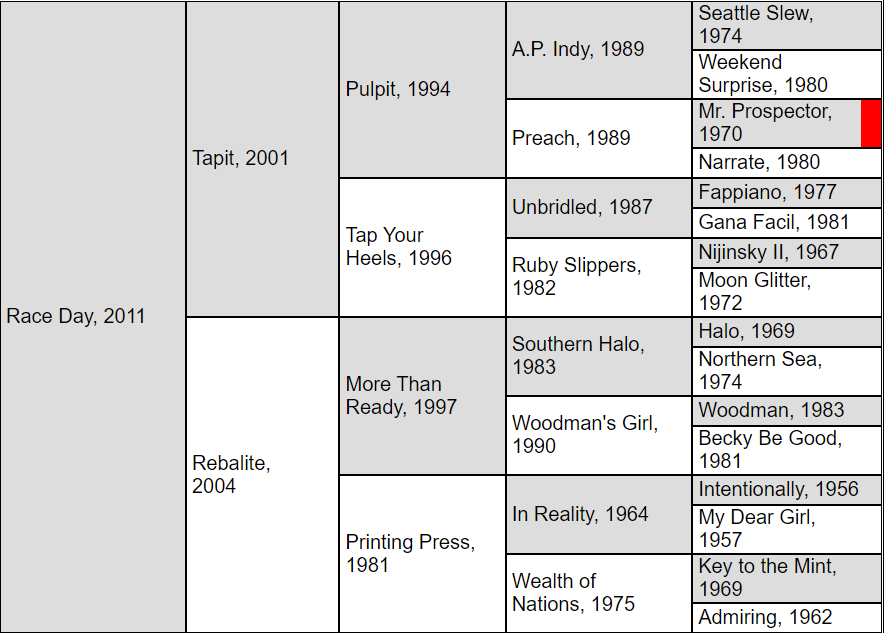 4. Race Day is well-bred on dam Rebalite’s side too. Her sire, More Than Ready, is internationally renowned for his turf progeny, but he’s also responsible for such major dirt winners as Verrazano, Catholic Boy, and two-time champion sprinter Roy H. Rebalite is a half-sister to multiple Grade 1-winning millionaire Lite Light, who romped by 10 lengths in the 1991 Kentucky Oaks (G1) for M.C. Hammer’s Oaktown Stable. Their female line traces to the celebrated matron *La Troienne.

5. White Abarrio’s dam, Catching Diamonds, is by record-setting leading sire Into Mischief. From the Storm Cat sire line and out of recently deceased Broodmare of the Year Leslie’s Lady, Into Mischief has enhanced his Derby credentials in recent years. He sired 2020 Derby-winning Horse of the Year Authentic; the second across the 2021 Derby wire, Mandaloun; and Audible, third to Justify in the 2018 Run for the Roses.

6. Catching Diamonds is closely related to Mutasaabeq, who is by Into Mischief and out of a half-sister to Catching Diamonds. The winner of the 2020 Bourbon (G2) on turf, Mutasaabeq reverted to dirt and captured the 2021 Mucho Macho Man S. His time as a potential Derby candidate was brief, for he was sidelined for the rest of the year.

7. Catching Diamonds’ half-brother Cool Cowboy was successful in both the United States and Dubai. Exported after victories in sprint stakes at Tampa Bay Downs, Prairie Meadows, and Mountaineer, Cool Cowboy won the 2016 Burj Nahaar (G3) and 2017 Al Shindagha Sprint (G3) during the Dubai Carnival. He placed in four stakes at Meydan, notably the 2016 Godolphin Mile (G2) on World Cup night.

8. Cool Cowboy and Catching Diamonds are out of a mare by Grand Slam, a beautifully-bred son of the Mr. Prospector stallion Gone West. Grand Slam captured the 1997 Champagne (G1) and Futurity (G1) to rank as one of the top contenders in the Breeders’ Cup Juvenile (G1). Unfortunately, a rival struck into him during the Juvenile, and Grand Slam sustained a significant soft-tissue injury. While he was able to recover and continue his career at three, winning the 1998 Peter Pan (G2) and placing in such events as the Haskell (G1) and Breeders’ Cup Sprint (G1), there remains a what-might-have-been. 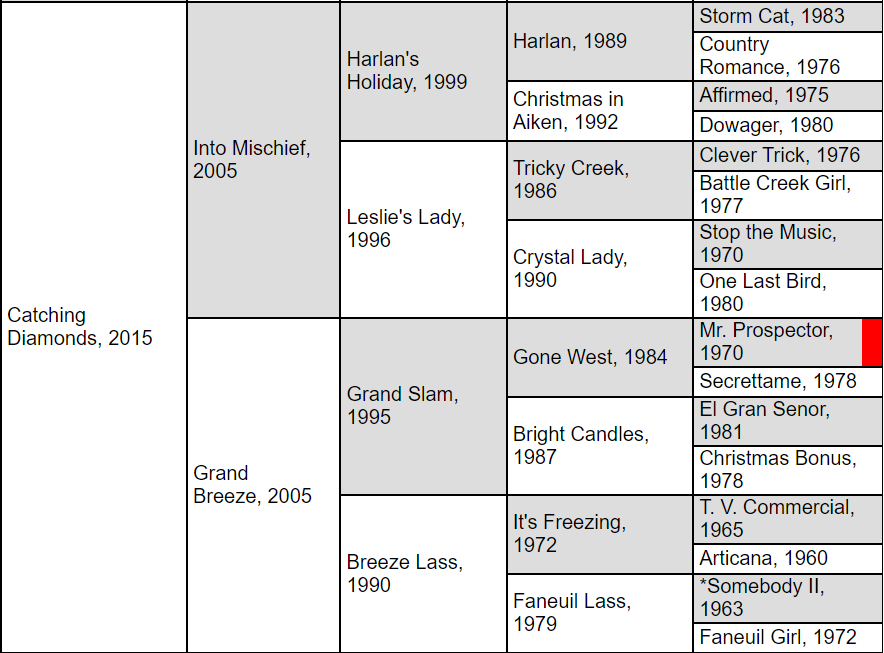 9. White Abarrio’s third dam, Breeze Lass, is by It’s Freezing, a multiple Grade/Group 3 winner who was a distant third to Seattle Slew and Exceller in the 1978 Woodward (G1). In another brush with greatness, It’s Freezing was promoted to second behind Hall of Famer My Juliet in the 1976 Vosburgh H. (G2) when Bold Forbes, the Kentucky Derby and Belmont champion, was demoted to third.
10. Breeze Lass’s dam, multiple Grade 3 winner Faneuil Lass, is by the obscure Australian import *Somebody II, who won The Shorts at Randwick in 1968, and out of Faneuil Girl. As her name hints, Faneuil Girl is a full sister to the prolific Faneuil Boy, who won or placed in 28 stakes in his 108-race career. Another full sibling, Faneuil Hall, was a multiple stakes winner with 74 lifetime starts, and she became the ancestress of 2019 Derby runner-up Code of Honor.
11. Faneuil Girl and her siblings were produced by Miss Newcastle, a daughter of Hall of Famer Coaltown. Often remembered for playing second fiddle to his Triple Crown-sweeping stablemate, Citation, in the 1948 Kentucky Derby, Coaltown was a superstar in his own right. The Calumet homebred was honored as champion sprinter during his sophomore campaign, and in 1949, he was voted champion handicap horse and shared the Horse of the Year title (with Capot).
12. Diving deeper through the matrilineal ancestry, this is the branch of the 9-e family descending from the British mare Distant Shore (foaled in 1880). By Hermit, the 1867 Epsom Derby winner and an essential influence in pedigrees, Distant Shore is the granddam of significant stallion Cyllene, sire of Polymelus and grandsire of breed-shaping patriarch Phalaris. 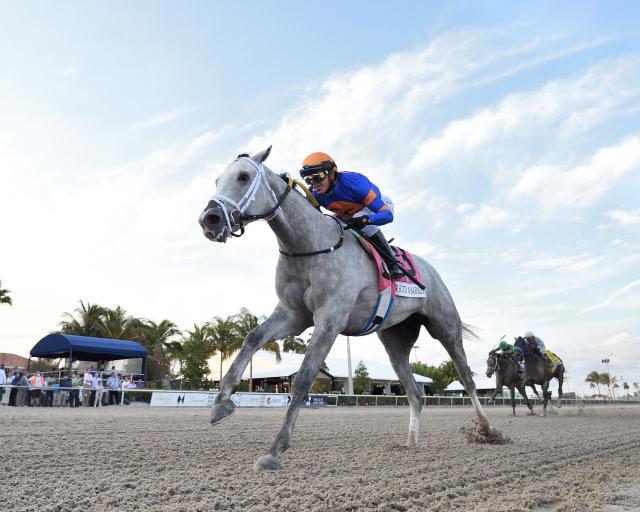