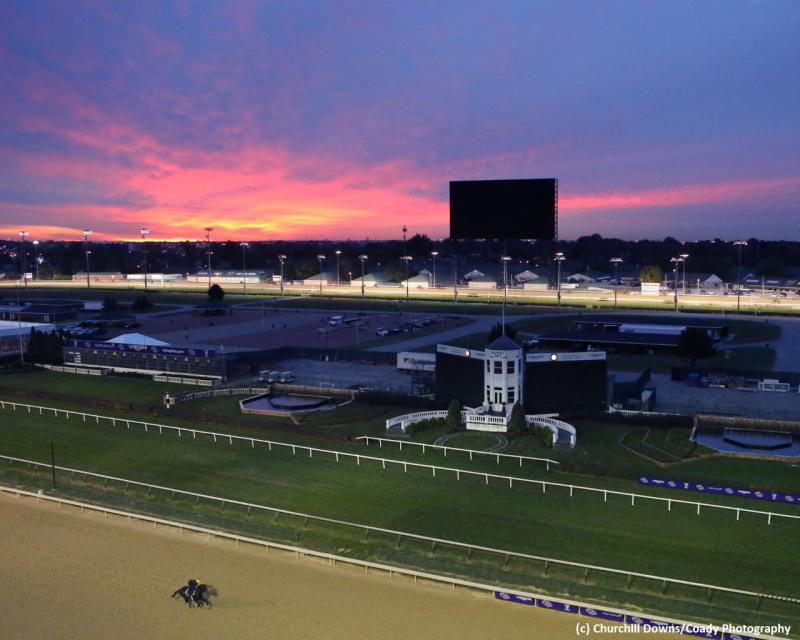 total of 15 juveniles threw their hats in the ring to contest Future Star Friday's $2 million Breeders' Cup Juvenile (G1). A trio in the field made their way to Churchill Downs via victories in the "Win & You're In" Breeders' Cup Challenge Series – Game Winner (American Pharoah Stakes), Knicks Go (Breeders' Futurity) and Complexity (Champagne Stakes).

The favorite is Bob Baffert's unbeaten Game Winner, who would certainly clinch divisional honors with a victory in the 1 1/16-mile affair. But the field has a lot of depth to it and Game Winner faces a tall task in the Juvenile. 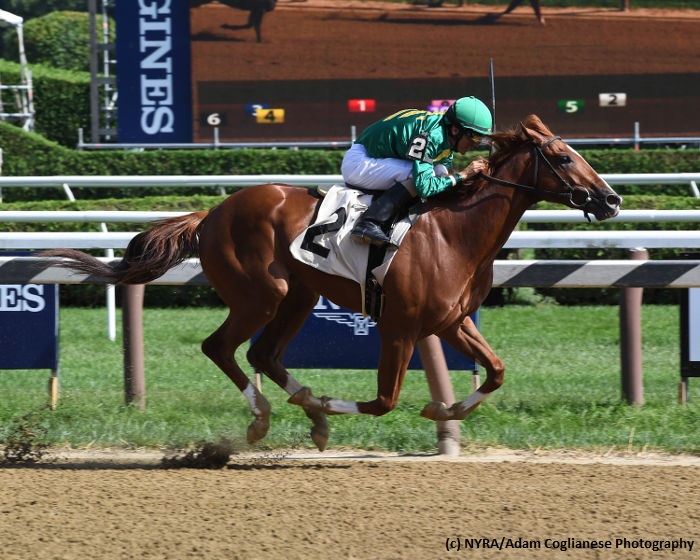 Code of Honor was a winner on debut when going wire-to-wire in a maiden special weight race at Saratoga. His next outing came in the Champagne Stakes (G1) and the colt looked more impressive in defeat when second, than he did in his win. The Kentucky-bred gray nearly went to the ground early in the Champagne but rebounded and closed with excellent energy to be a clear runner-up. The May foal might be moving best of all in the stretch with expected improvement. 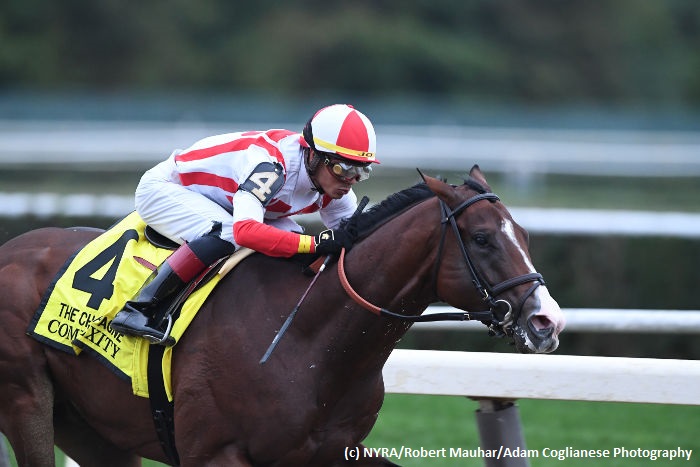 Complexity might be flying under the radar for a horse who has yet to be challenged. The Chad Brown pupil was bet to 4-5 odds in his Saratoga debut and didn't disappoint, overcoming a tardy start to win by 4 1/2 lengths. The $375,000 yearling then reappeared in the Champagne Stakes (G1) at Belmont Park and once again lived up to his favored status. The April foal went fast early and fast late in a dominant showing, crossing the wire three lengths clear, and looks like the one to catch in the Juvenile. 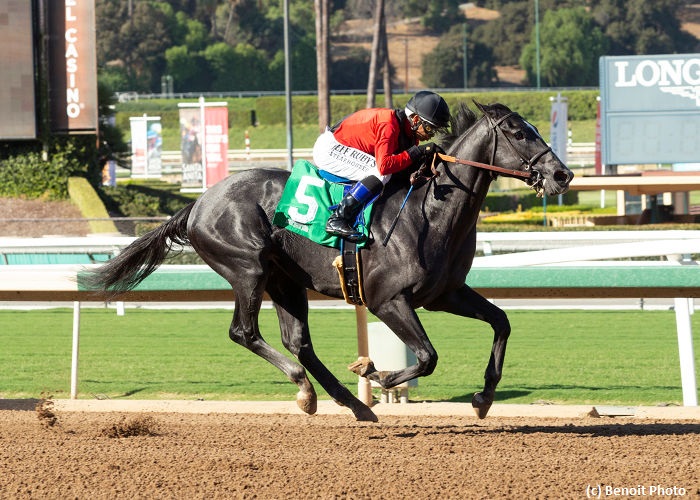 The $475,000 yearling purchase ran into a pair of very good youngsters at Del Mar, finishing second from off the pace in both of those sprint events. Dueling went one mile at Santa Anita most recently and pulled away to a convincing maiden conquer, earning his way to the Juvenile field. The gray colt still needs further improvement but he is heading in the right direction. 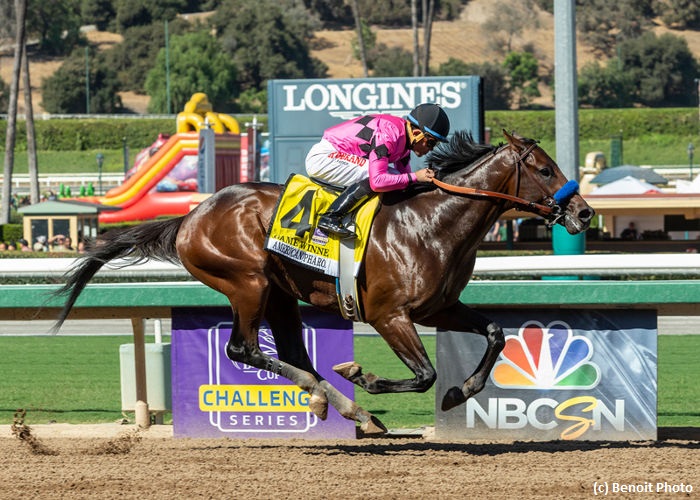 Game Winner enters the Juvenile as the clear favorite with a trio of convincing wins to his credit. Baffert trainee dominated his debut on the Pacific Classic (G1) undercard and has done nothing wrong since with wins in the Del Mar Futurity (G1) and American Pharoah Stakes (G1), the latter by 4 1/2 lengths. The $110,000 bargain purchase looks capable of anything at this stage of his development. 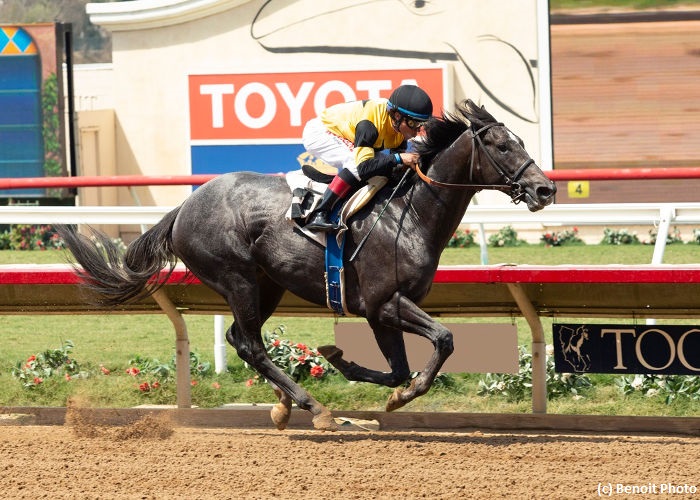 Gunmetal Gray was outrun in his sprint debut at Del Mar but improved when stretching out to route racing, breaking his maiden by 6 3/4 lengths at that venue. Next out he finished second to Game Winner in the American Pharoah Stakes (G1), and the talented colt appears to be coming up to the Juvenile in fine fashion with a bullet six furlongs in his October 20 morning drill. 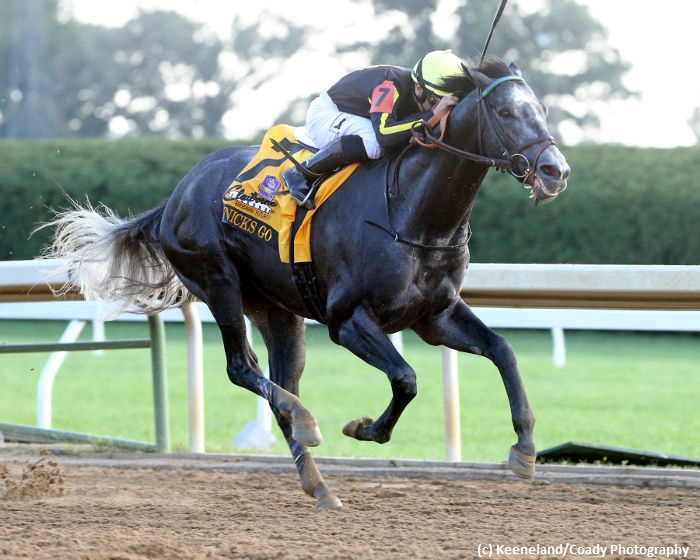 Sent off at 70-1 in the Breeders' Futurity (G1) at Keeneland, Knicks Go established the early lead and never backed up en route to a 5 1/2-length drubbing of his 12 foes that day. The rapidly improving gray took a huge leap forward when getting Lasix and running long for the initial time at Keeneland. He is the enigma in the field for Ben Colebrook and his 92 BRIS Speed number puts him within range of the likely favorites. 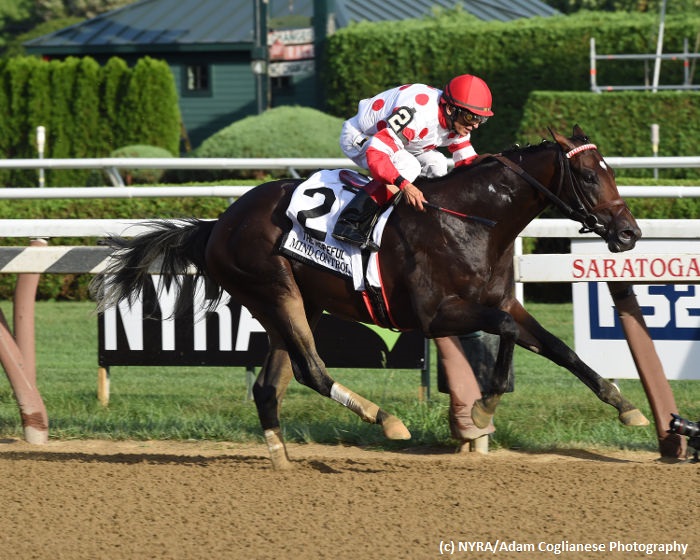 Mind Control earned his way into the Juvenile off the strength of his wire-to-wire victory in the Hopeful Stakes (G1) at Saratoga. The bay colt began his career when second at Delaware Park in a sprint before graduating in a similar spot at Monmouth Park. The speedy Kentucky-bred missed an assignment at Keeneland following his Hopeful heist, though it might have been a blessing to give him more time to develop. 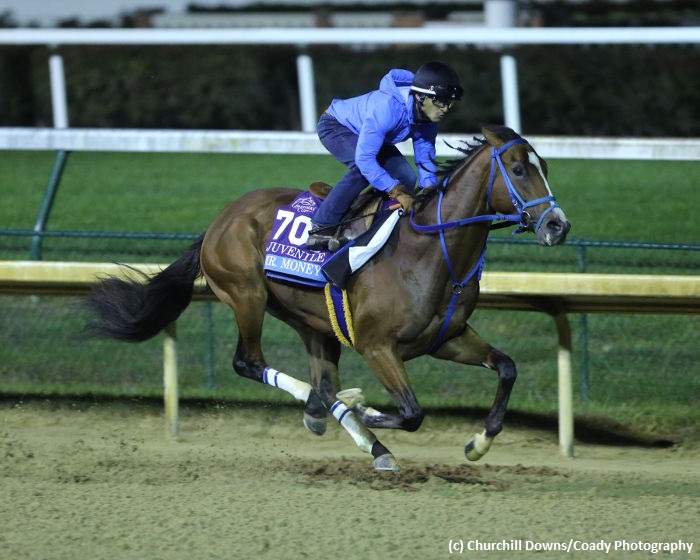 Mr. Money will be a longshot in the field, but the colt was visually impressive in breaking his maiden on this course last time in his first run going long, so he deserves a chance. The February foal is obviously improving and could have a nice future ahead of him with continued growth.

Signalman has never been worse than runner-up from three races prior to the Juvenile. The $32,000 bargain yearling purchase finished second on debut at Churchill Downs and graduated in beating a pair of nice prospects at Saratoga in his second lifetime appearance. The bay colt rallied for a good second behind Knicks Go in the Breeders' Futurity (G1) last out despite being compromised with traffic. The March foal could be a late factor in the Juvenile with another step forward from off the pace. 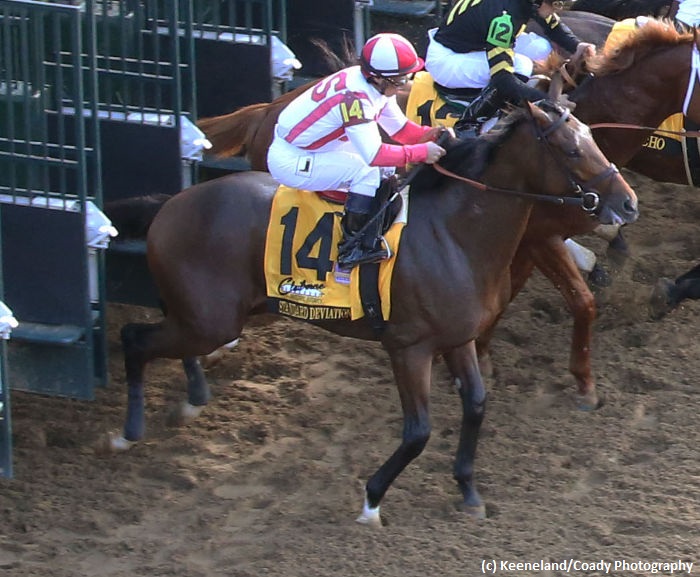 Standard Deviation won at first asking in an off-the-turf run at the Spa, and overcame an impossible 13 post to be third in the Breeders' Futurity with a wide voyage throughout. The $450,000 son of Curlin might be a bit behind the major players for the Juvenile, though his presence will be felt as a sophomore on the Triple Crown trail. Standard Deviation has a world of long-term appeal. 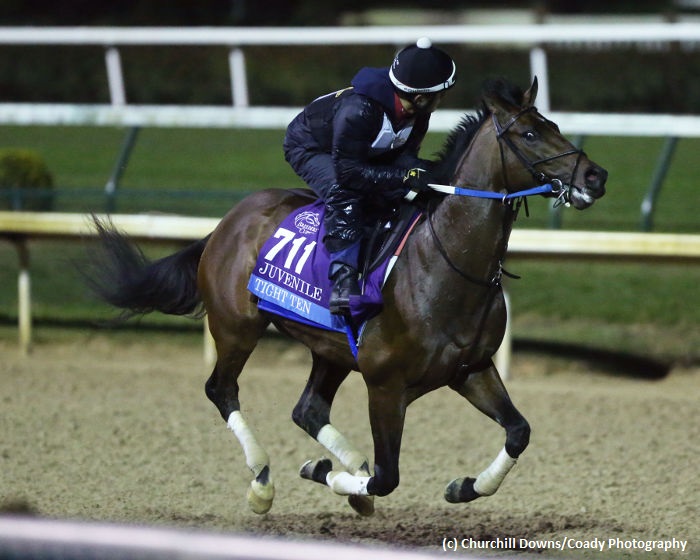 Well-bred youngster has finished first or second in each of his trio of career races to this point. The March foal looked the part with a good debut tally at Churchill Downs and followed that up with a pair of runner-up performances: a second in the Saratoga Special (G2) which preceded his good try in the Iroquois Stakes (G3) on this surface. His affinity for this locale, evidenced by a pair of recent bullet morning works, makes the two-year-old a contender. 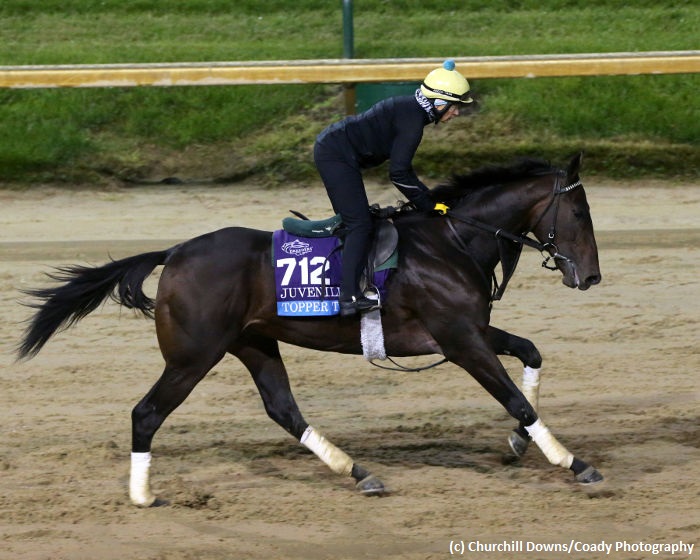 Topper T comes into the Juvenile with five races under his belt, the most in the field. The consistent Iowa-bred has proven stakes form sprinting in the Midwest but will have to prove capable of going a route of ground while facing much better than he has ever faced. The dark bay colt has put in a pair of strong half-mile drills of late at Churchill Downs but still needs a huge leap forward to light up the tote board.

Trophy Chaser was an emphatic, 15-length maiden winner in the slop at Gulfstream Park two back. Fifth in the Champagne last out in a first try with winners, the son of Twirling Candy will try and prove that he belongs with this kind in his second time attempting a route of ground. 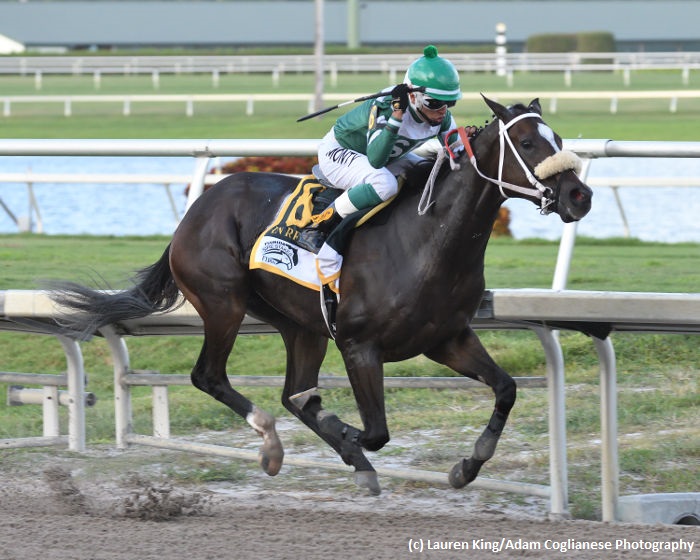 Well Defined has raced solely at Gulfstream Park to this juncture but comes off his best effort. The gelding romped by more than seven lengths in the In Reality Division of the Florida Stallion Stakes most recently in a first route attempt. The Florida-bred has earned BRIS Speed figures of 101 and 103 in his last two races, the latter topping the field. The wild card faces a tough cast in his initial foray out of the Sunshine State but could factor with a repeat of his latest. 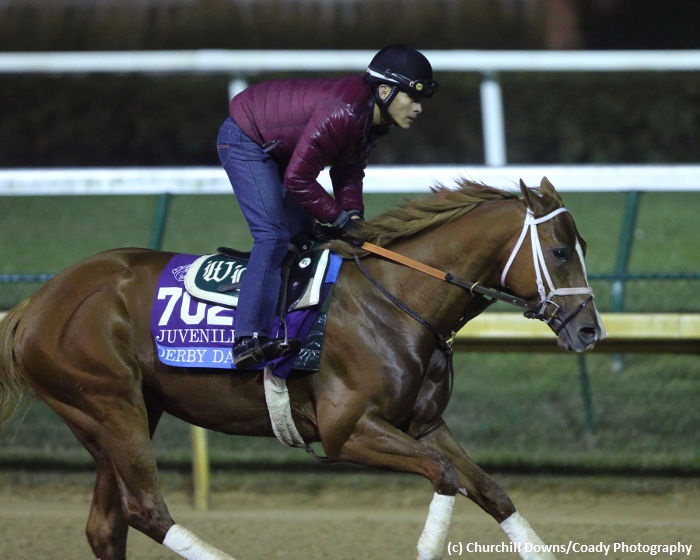 Derby Date looks to be in an ambitious spot as a maiden in the field. The D. Wayne Lukas trainee has faced Grade 1 foes in two straight, finishing eighth in the Hopeful Stakes (G1) followed by a fifth-place result in the Breeders' Futurity (G1). The Calumet homebred has some pace but would need a lifetime best to conquer this strong field. Derby Date would also need one defection to make the Juvenile starting gate. 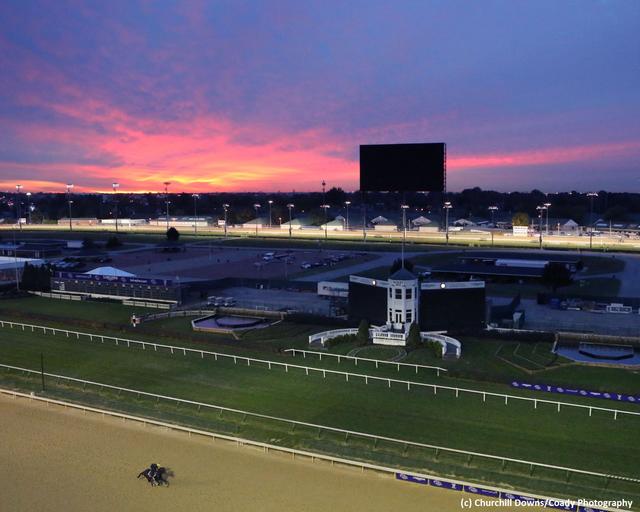