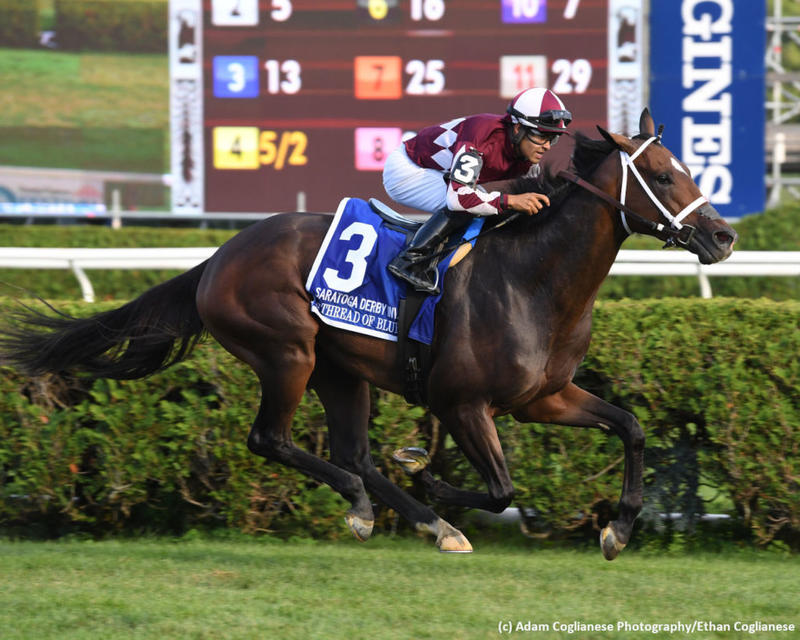 A field of nine will vie in the inaugural running of the $1 million Jockey Club Derby Invitational Stakes at Belmont Park on Saturday . The grassy race for three-year-olds will also offer a starting berth in the $4 million Breeders’ Cup Turf (G1) at Santa Anita on November 2 as part of the “Win & You’re In” series.

A THREAD OF BLUE

Grade 3 winner led throughout in a convincing tally in the Saratoga Derby last out. $430,000 son of Hard Spun is the pace of the race and also gets the rail post in advance of his debut at 12 furlongs. Kentucky-bred rates a big chance with any improvement off of his latest venture.

Grade 3 victor prepped for this assignment with a runner-up showing in the Jersey Derby at Monmouth Park last time out. This Todd Pletcher pupil is winless since 2018, but he could appreciate the added distance here in a first turf run longer than 1 1/16 miles. Junior Alvarado will guide the well-bred chestnut.

Belmont Derby (G1) star made a belated run to be fifth in the recent Saratoga Derby in advance of his third run in the Turf Trinity. Son of Kitten’s Joy has shown improvement since stretching out in distance and has an obvious affinity for the Belmont lawn. The bargain $50,000 purchase will track the early pace under Jose Lezcano once again.

French import is the wildcard in the field having run with lesser and being from relatively obscure connections. The gelding has won three of his last four, however, and he will run with Lasix for the initial time. His regular pilot, Tony Piccone, will accompany the sophomore in a U.S. debut for both of them.

This Irish-bred and French-based colt has been sharp this campaign and enters with wins in three of his last four outings. The bay was an even fifth in his lone run at a similar level, but the sophomore hails from excellent connections and rates a big chance in his stateside bow. The proven stayer will have the services of Flavien Prat on Saturday.

Ontario-bred comes in after taking the final two legs of the Canadian Triple Crown for conditioner Steve Asmussen. Talented and versatile son of Broken Vow was victorious in his turf debut at Woodbine most recently, and the sophomore has never been better in anticipation of this lucrative event. The win contender inherits top jockey John Velazquez.

Top BRIS Speed rating (92) when seventh in the Saratoga Derby

This expensive three-year-old has yet to break through with a signature win, but he has a chance on Saturday in his initial try at 1 1/2 miles. Scat Daddy colt made up some ground when seventh in the Saratoga Derby last out and could peak here making a third run since coming to the United States. The intriguing longshot will have Manny Franco on board.

Top BRIS Speed rating (99) when second in the Saratoga Derby

This consistently very good Chad Brown trainee had an ideal prep for this when a fine second in the Saratoga Derby most recently. The likely post-time favorite has never run a bad race, and he gives every impression of a runner who will appreciate going 12 furlongs at Belmont Park. The late-running colt could be moving best of all late in this endeavor.

Talented Group 3 winner draws outside and rates a big winning chance if he carries his European form to the race. Three-year-old son of Noble Mission is a few head bobs from being unbeaten on the turf in his lifetime, and it’s a very positive sign that jockey Jamie Spencer comes along to guide him in his stateside debut. The Kentucky-bred will move forward on a firm surface, as well. 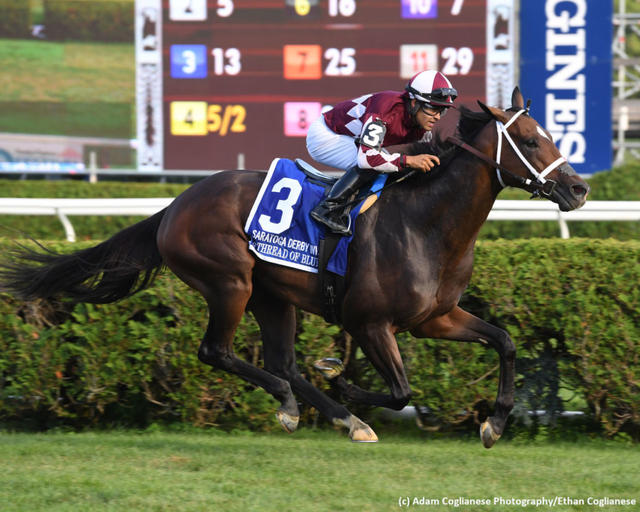