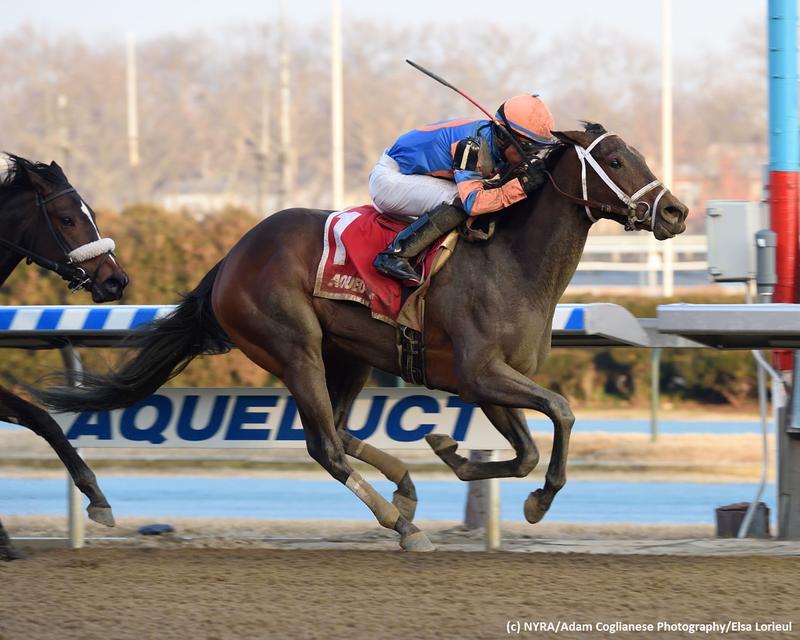 Repole Stables’ homebred Always Shopping has been crying out for extra ground to accommodate her late-running style, and on Sunday the bay miss was given just that in the 1 1/8-mile Busanda Stakes at Aqueduct.

Run at the same distance as the May 3 Kentucky Oaks (G1) at Churchill Downs, the $101,000 Busanda offered 10-4-2-1 points to the respective top four finishers as part of the Road to the Kentucky Oaks series.

The Todd Pletcher-trained Always Shopping took full advantage of the two turns in Sunday’s race, settling into fifth as Filly Joel took command through fractions of :23.91, :48.52 and 1:13.34. Jockey Manny Franco allowed Always Shopping to inch closer to the pacesetter before engaging Filly Joel in the stretch.

Always Shopping easily grabbed the advantage and pulled off to be 1 1/4 lengths clear on the wire, breaking her maiden in the process. The bay lass stopped the clock in 1:52.24 and returned $6.30 as the 2-1 favorite on Sunday.

Filly Joel proved best of the rest, 5 1/2 lengths clear of Afleet Destiny, who in turn was four lengths in front of Miss Marilyn. Discreet Sister came next and was followed under the wire by Lady Banba, Getting Warmer, Floss Dancer and Destiny Over Fate.

Always Shopping is now 4-1-2-0 and has banked $87,000 in lifetime earnings. She finished fifth sprinting six furlongs in her debut at Saratoga last July, then stretched out to 1 1/16 miles and ran second behind Filly Joel in a Belmont Park maiden on October 25. The Kentucky-bred lass closed out her juvenile campaign with another second, this time to Miss Marilyn, in an Aqueduct maiden on December 14.

Always Shopping is out of the More Than Ready mare Stopshoppingmaria, a stakes winner who was runner-up in both the Breeders’ Cup Juvenile Fillies Turf (G2) and Frizette Stakes (G1) in 2011. The Awesome Again sophomore lass is a half-sister Grade 3-placed stakes heroine Mo Shopping.

The New York-path to the "Lilies for the Fillies" continues at Aqueduct in the March 9 Busher Invitational Stakes and on April 6 in the Gazelle Stakes (G2). The Busher is worth 50-20-10-5 points while the Gazelle will award 100-40-20-10

"We were cautiously optimistic about this spot. We were always looking to stretch her out and get her to race at two turns. She hadn't broke her maiden yet, but she had run well in her last start. Manny did a great job saving ground and tilted her out down the stretch. She's the grinding type and kind of grinded out the win. At this point, we'll see how she comes out of this race and go from there."

"The distance helped her a lot. Last time (runner-up to Miss Marilyn on December 14 at Aqueduct) she went a mile and the speed held up. I liked the distance today for her. The trip worked out great. I just wanted to make sure she came out of there well and get my position before the turn, and that's what she did. After that, she did it nice."

"I had a pretty good trip. The first turn kind of hurt me a little bit. I had to use her a bit to get down towards the rail from my post. It might have hurt us in the end, but she gave a good effort and it was a good race. She tried hard the entire way." 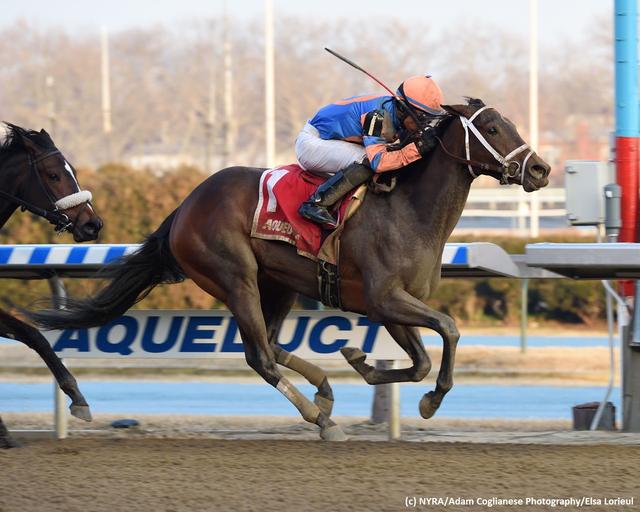