On both “Future Stars Friday” and Saturday at Del Mar, the Breeders’ Cup will include progeny of recent Kentucky Derby (G1) heroes.

Triple Crown star American Pharoah, who sired a Breeders’ Cup winner in his first crop with Four Wheel Drive (2019), has one chance on each day of the championships. His son Mackinnon brings a three-race winning streak into Friday’s Breeders’ Cup Juvenile Turf (G1). On Saturday, his multiple Grade 2 victress As Time Goes By tries the Distaff (G1). The four-year-old As Time Goes By is out of Broodmare of the Year Take Charge Lady, making her a half-sister to champion Will Take Charge.
The hot favorite in the Distaff, Letruska, is a daughter of 2010 Kentucky Derby victor Super Saver. Kentucky-bred but initially raced in Mexico, where she was an unbeaten champion, Letruska has used her high cruising speed to win five straight major U.S. races this term. If she can extend her skein on Saturday, she would enter discussion for Horse of the Year.
Super Saver is also represented in Friday’s Juvenile (G1) by Double Thunder, and two of his sons have Breeders’ Cup runners as well. Champion Runhappy, who gave Super Saver a first-crop Breeders’ Cup winner in the 2015 Sprint (G1), hopes that Following Sea can emulate him in the same race on Saturday. Filly & Mare Sprint (G1) hopeful Edgeway is by Super Saver’s son Competitive Edge.
Nyquist, the 2016 Derby champ, will try to sire the Juvenile Fillies (G1) winner for the second year in a row. After his first-crop daughter Vequist scored last fall, Sequist aims to step up. Nyquist has two more chances on Friday, with Credibility in the Juvenile Turf and Turnerloose in the Juvenile Fillies Turf (G1).
California Chrome, the ever-popular Derby hero of 2014, sends out his first Breeders’ Cup contender Friday in California Angel. The bargain $5,500 OBS purchase got up in time to spring a 17-1 upset in the Jessamine (G2), a “Win and You’re In” for the Juvenile Fillies Turf. Ironically, she edged Nyquist’s filly Turnerloose in third, and the Derby winners’ daughters renew rivalry at Del Mar.
Big Brown, the 2008 Derby romper, almost had a runner in Saturday’s Mile (G1). His millionaire son Somelikeithotbrown was among 24 initial pre-entries, but needed defections to get into the main body of the field, and ended up not entering.
Hall of Famer Sunday Silence has three grandsons in the Mile. The Brazilian-bred duo of Ivar and In Love are both by the Sunday Silence stallion Agnes Gold. Japanese shipper Vin de Garde is by Sunday Silence’s greatest son, Deep Impact, who is also the broodmare sire of Mile hopeful Blowout. Deep Impact has a top Breeders’ Cup contender in Loves Only You. After considering the Turf (G1), Loves Only You will compete in the Filly & Mare Turf (G1). Sunday Silence’s grandson Orfevre, the 2011 Japanese Triple Crown sweeper, has Marche Lorraine in the Distaff.
The influence of 1990 Kentucky Derby hero Unbridled likewise endures, with American Pharoah just one of his scions carrying his sire line into the future. Other Unbridled-line sires with notable Breeders’ Cup hopes are Midshipman, whose Averly Jane is the early favorite in the Juvenile Turf Sprint (G2); Liam’s Map, whose Juju’s Map is in the Juvenile Fillies; and Arrogate, who sends out Japanese debut romper Jasper Great in the Juvenile.

And of course, going further back on the Derby honor roll, such legends as Northern Dancer and Seattle Slew remain essential building blocks of modern pedigrees, along with the great Secretariat. 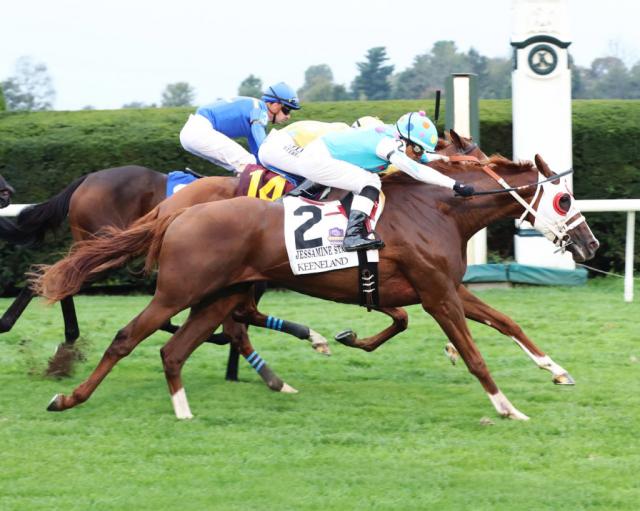