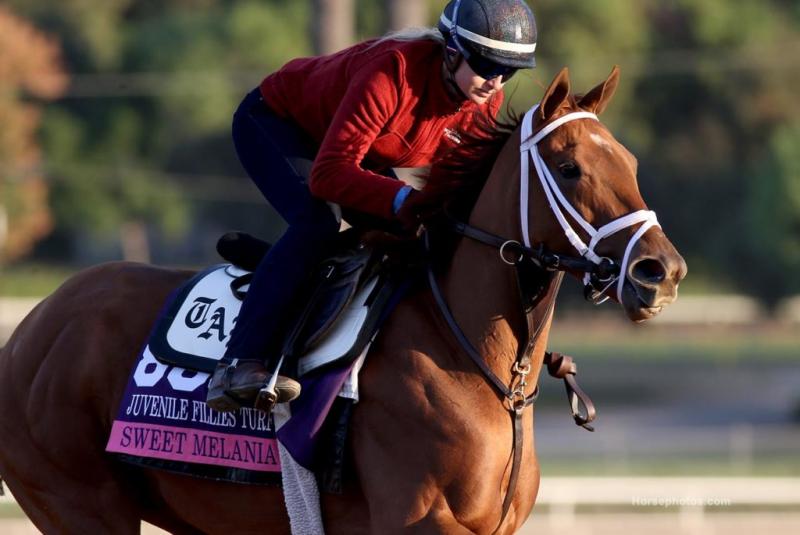 Triple Crown champion American Pharoah, who closed his racing career with a brilliant victory in the 2015 Breeders’ Cup Classic (G1), has chances of siring a Breeders’ Cup winner in his first crop. His son Four Wheel Drive is the morning-line favorite for the Juvenile Turf Sprint (G2), where Another Miracle also competes, and his daughter Sweet Melania ranks as one of the top contenders in the Juvenile Fillies Turf (G1) later on “Future Stars Friday” at Santa Anita.

The success of American Pharoah offspring on turf has been a notable development of 2019. It wasn’t exactly a surprise, given the turf influences in his own pedigree. Indeed, his Hall of Fame trainer, Bob Baffert, believed that “Pharoah” would have excelled on grass himself. As a sire standing for the international powerhouse of Coolmore, he’s also had a number of turf-oriented mares visit his court, both in the Bluegrass at Ashford and especially in his sojourns in Australia during the Southern Hemisphere breeding season.

The five-furlong Juvenile Turf Sprint, slated to go off at 4:12 p.m. (EDT) Friday, could launch Pharoah as a Breeders’ Cup sire.

Four Wheel Drive, installed as the 3-1 favorite on the morning line, has captured both of his starts by a combined margin of more than six lengths. Making his career debut in the $100,000 Rosie’s S. at Colonial Downs, the Wesley Ward trainee rolled in a course-record 1:00.84 for 5 1/2 furlongs. Last time he dominated the Futurity (G3) at Belmont Park, a “Win and You’re In” for the Juvenile Turf Sprint.

Another Miracle was only fifth in the Futurity, but there was a reason for his uncharacteristic effort: trainer Gary Contessa told Daily Racing Form that the colt lost two of his shoes, and that affected his traction. Previously consistent, Another Miracle was second to future Saratoga Special (G2) winner Green Light Go in his debut on the dirt. He promptly won next out, wiring an off-the-turf maiden at Saratoga, and looked sharp taking the Skidmore on the Spa turf. Thus he’s better than his 15-1 odds in the Breeders’ Cup.

Both Pharoah colts must overcome a strong European contingent led by A’Ali, who landed the “Win and You’re In” Norfolk (G2) at Royal Ascot, and their top domestic opponent is the filly Kimari. A stablemate of Four Wheel Drive from the Ward barn, Kimari also raced at Royal Ascot, where she missed narrowly in the Queen Mary (G2). Ward has a total of four entered, with Cambria in the main body of the 12-horse field and Karak unlikely to draw in as the fourth on the also-eligible list.

In the 1 1/16-mile Juvenile Fillies Turf, Sweet Melania is the joint 5-1 second choice along with British shipper Daahyeh, and just behind Ireland’s 9-2 morning-line favorite Albigna.

Trained by Todd Pletcher, Sweet Melania switched to turf after placing third twice on dirt, and she’s looked like a different horse. She broke her maiden at Saratoga, got mugged late by Crystalle in the P.G. Johnson, and booked her Breeders’ Cup ticket with a 5 1/2-length romp in the Jessamine (G2) at Keeneland.

Her leading European rivals are also coming off “Win and You’re In” scores, Albigna in the Prix Marcel Boussac (G1) on Arc Day and Daayheh in the Rockfel (G2) at Newmarket. And Sweet Melania’s familiar foe from the Spa, Crystalle, is another major threat in the full field of 14.

American Pharoah himself had to be scratched as the hot favorite for the 2014 Breeders’ Cup Juvenile. At that time, it wasn’t clear if his foot problem would compromise his three-year-old campaign. But Pharoah was back in business at Oaklawn the next spring, setting him up for victories in the Kentucky Derby (G1), Preakness (G1) and Belmont (G1). The first horse since Affirmed (1978) to sweep the Triple Crown, Pharoah went out on a high in the Breeders’ Cup Classic to achieve a “Grand Slam.”

American Pharoah would qualify for a more exclusive level of membership by siring a two-year-old Breeders’ Cup winner in his first crop. His own male-line ancestor, great-grandsire Unbridled, was the first to do so through 1995 Juvenile star Unbridled’s Song. Tiznow accomplished that feat when daughter Folklore captured the 2005 Breeders’ Cup Juvenile Fillies (G1), and Uncle Mo followed suit courtesy of Nyquist in the 2015 Juvenile.

Also worth mentioning in this context, Unbridled’s Song got a Breeders’ Cup winner in his first crop, 2001 Distaff (G1) victress Unbridled Elaine, but she was three, and Pleasantly Perfect’s first-crop Filly & Mare Turf (G1) heroine of 2010, Shared Account, was four.

Ironically, Shared Account is the dam of Sharing, one of Sweet Melania’s rivals in the Juvenile Fillies Turf. Sharing is trying to become the first Breeders’ Cup winner produced by the marriage of Breeders’ Cup winners – her sire, Speightstown, scored in the 2004 Sprint (G1). 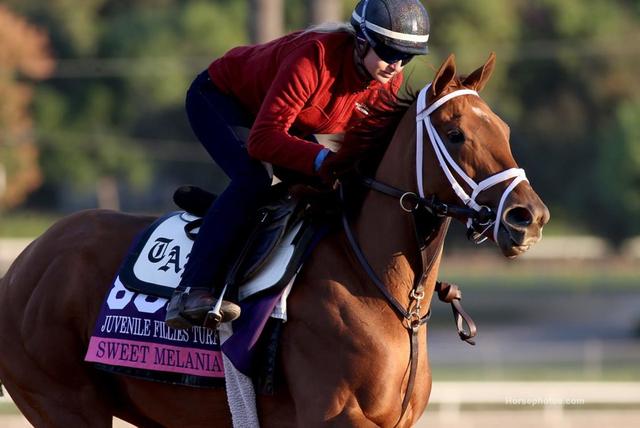