Wynn Las Vegas released the 2016 Kentucky Derby Future Odds on November 9 and it’s no surprise to see Nyquist, the unbeaten Breeders’ Cup Juvenile winner and presumptive 2-year-old male champion, listed as the early favorite. However, a few names among the shortest-priced Kentucky Derby hopefuls may not be too familiar.

I’ll analyze the Kentucky Derby Odds for the 19 horses listed at under 100-1 (Wynn odds in parenthesis).

NYQUUIST (15-1): His superiority among 2-year-olds is unquestioned, and it’s easy to admire the grit he displayed winning both two-turn starts this fall, but I won’t be surprised to see rivals catch up to him next year – Uncle Mo colt will need to outrun a pedigree that appears built for distances under 1 ¼ miles.

MOHAYMEN (20-1): Unbeaten in two starts, including a sharp 1 ¾-length victory in the November 4 Nashua Stakes at Aqueduct, the Kiaran McLaughlin-trained colt appears to have plenty going for him. He’s a son of leading sire Tapit and is out of a mare by Dixie Union, sire of 2012 Belmont Stakes winner Union Rags. Mohaymen could make his first two-turn start in the November 28 Remsen Stakes at Aqueduct, a points’ race in the Road to the Kentucky Derby series.

MOR SPIRIT (20-1): Bob Baffert is a four-time Kentucky Derby winner, including Triple Crown hero American Pharoah, and Mor Spirit is conditioned by the Hall of Fame trainer. A son of Eskendreya and out of a Dixie Union mare, the youngster is bred for classic distances and is 1-for-2 in his brief career so far, finishing second in a sprint first-time out before stretching out to two turns to post a 4 ¼-length score in a October 23 maiden special weight race at Santa Anita.

SWIPE (20-1): He earned only one win from seven starts this year but did finish second in his last four stakes outings, all coming at hands of Nyquist. Swipe wasn’t a serious threat in the Best Pal and Del Mar Futurity at one turn, but the Keith Desormeaux trainee ran much better when stretching out to a route in his last two starts, missing by only a half-length while rallying furiously in the Breeders’ Cup Juvenile. And that’s no surprise considering he’s a son of Birdstone, sire of Kentucky Derby winner Mine That Bird; and champion 3-year-old male and Belmont Stakes victor Summer Bird.

BRODY’S CAUSE (25-1): A maiden winner at Churchill Downs three starts back, Brody’s Cause jumped straight to stakes company with a one-length victory in the Grade 1 Breeders’ Futurity at Keeneland and experienced a wide trip closing for third in the Breeders’ Cup Juvenile. By Giant’s Causeway, the late-running colt looms as an extremely promising Kentucky Derby prospect for Dale Romans.

EXAGGERATOR (40-1): By two-time Horse of the Year Curlin, Exaggerator displayed fine class as a juvenile and is eligible to keep improving as a 3-year-old. Winner of the Grade 2 Saratoga Special, he followed with a runner-up in the Breeders’ Futurity and a fourth in the Breeders’ Cup Juvenile. The dark bay colt is bred for longer distances and along with stablemate Swipe, Exaggerator provides trainer Keith Desormeaux with a formidable one-two punch entering 2016.

GUN RUNNER (40-1): Gun Runner rates as a good-looking prospect for trainer Steve Asmussen. A debut winner at Churchill Downs on September 11, the chestnut colt followed with an impressive two-length victory over a salty allowance field going two turns at Keeneland on October 17. By Candy Ride and out of a Giant’s Causeway mare, Gun Runner appears well-suited for longer distances and is expected to make his stakes bow in the November 28 Kentucky Jockey Club at Churchill Downs.

SONGBIRD (40-1): Owner Rick Porter attempted to downplay Kentucky Derby aspirations for the front-running filly, but let’s see where she is in March when a decision has to be made whether to attempt a points’ race. Songbird is a supremely talented daughter of Medaglia d’Oro, winning all four starts by convincing margins, including a tour-de-force performance in the Breeders’ Cup Juvenile Fillies, and Songbird is as exciting as they come. Looking forward to seeing her perform next year.

SAIL AHOY (45-1): Trained by Hall of Famer Shug McGaughey, who earned his first Kentucky Derby win in 2013, Sail Ahoy captured his second career outing at Belmont Park on September 12. He followed with a non-threatening in the Grade 1 Champagne Stakes and exits a third to Mohaymen in the Nashua. Sail Ahoy has done nothing flashy so far, but he’s displayed a solid late kick and supporters believe in his potential to improve significantly as a 3-year-old, similar to 2013 Kentucky Derby winner Orb. He could point to the Remsen or wait to run at Gulfstream during the winter.

GREENPOINTCRUSADER (50-1): An impressive 4 ¼-length winner of the Champagne Stakes, the late-running colt didn’t meet expectations as the 7-2 favorite in the Breeders’ Cup Juvenile, belatedly passing rivals to be seventh, but Greenpointcrusader remains an intriguing prospect for the 2016 Kentucky Derby. The Bernardini colt hails from a classy female family and could be any kind of 3-year-old if he continues to move forward.

ANNUAL REPORT (60-1): Colt captured his first two starts at shorter distances, including a nice win in the 6-furlong Futurity at Belmont Park, but Annual Report bred to excel at longer distances. A son of the late sire Harlan’s Holiday and out of a Seeking the Gold mare, he’s a stablemate of Mohaymen and trainer Kiaran McLaughlin could run both promising juveniles in the Remsen or send one to the Kentucky Jockey Club at Churchill Downs. We’ll learn more next time when Annual Report stretches out to a route.

TALE OF S’AVALL (60-1): A smart debut winner on the Travers undercard, Tale of S’avall found himself on the lead by default in the Champagne and wound up weakening to fifth in his stakes debut. He was entered to the Breeders’ Cup Juvenile but wound up being scratched due to a minor foot issue, and Kentucky Derby-winning trainer Barclay Tagg expects him to be fully recovered for his 3-year-old season. Out of an Awesome Again mare, the son of Tale of Ekati possesses the pedigree to perform well at two-turn trips and could develop into a classy performer at age three.

CONQUEST WINDYCITY (75-1): Second when making his debut in a turf route at Saratoga, Conquest Windycity was favored in the September 12 Iroquois Stakes at Churchill Downs but wound up a troubled a fourth. The son of Horse of the Year Tiznow came back to break his maiden last time at Keeneland and along with stablemate Conquest Big E, he’s one to watch for next year in the Mark Casse barn.

DESERVED (75-1): He’s still a maiden for Hall of Fame trainer Bill Mott, recording a runner-up finish to Sail Ahoy last time in his second career start, but the colt hails from a classy female family and is bred to excel at longer distances as he matures. Deserved still has much to prove but can’t be counted out of consideration at this stage.

GIFT BOX (75-1): Chad Brown-trained colt exits a narrow win in an off-the-turf maiden race at Belmont Park. By Twirling Candy, who was at his best at distances up to 1 1/8 miles, the gray colt hails from the immediate female family of stakes-winning sprinters Stonetastic and Our New Recruit. He’ll need to outrun his pedigree to excel at longer distances next spring.

I WILL SCORE (75-1): Jerry Hollendorfer-trained colt rolled to a 6 ½-length victory when making his career bow in a 5 ½-furlong maiden special weight race at Los Alamitos. I Will Score could be a successful 3-year-old, but he’s bred to relish sprint/middle-distance races.

AMIS GIZMO (85-1): He’s 3-for-3 in his career, winning a pair of restricted stakes for Ontario-bred juveniles at Woodbine in convincing fashion, and this is the female family of Ami’s Holiday, a Kentucky Derby contender earlier this year following a runner-up in the Tampa Bay Derby. Amis Gizmo must still prove himself at two turns and on dirt (raced exclusively on Polytrack), but he remains a promising type entering 2016.

COCKED AND LOADED (85-1): Winner of the September 12 Iroquois Stakes, Colonel John colt exits a respectable fifth in the Breeders’ Cup Juvenile. His affinity for Churchill Downs is an advantage, but the Larry Rivelli trainee is a precocious 2-year-old who excelled at 4 ½ and 5 ½-furlong distances earlier this year; we don’t often see those types develop into serious Kentucky Derby contenders. 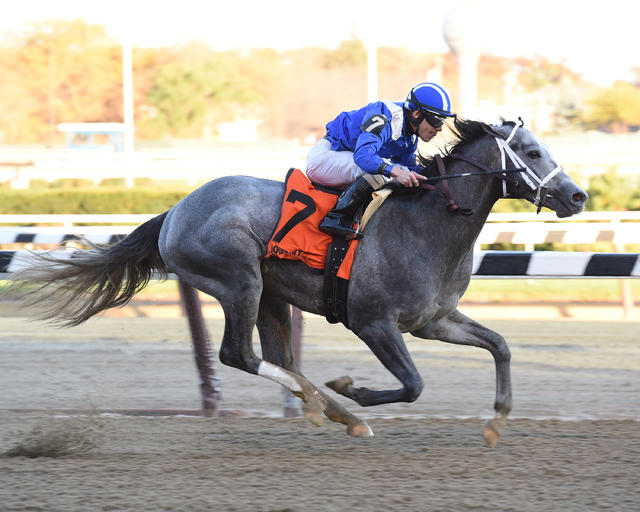