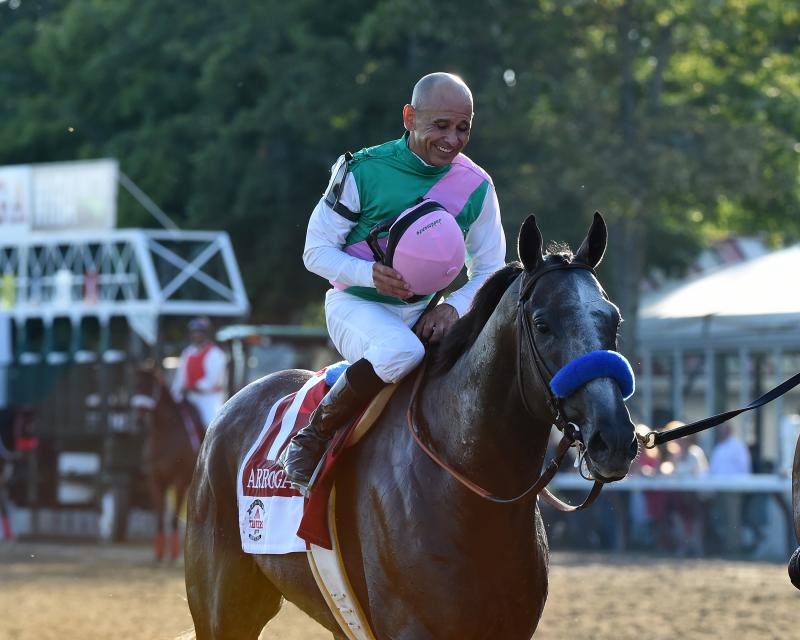 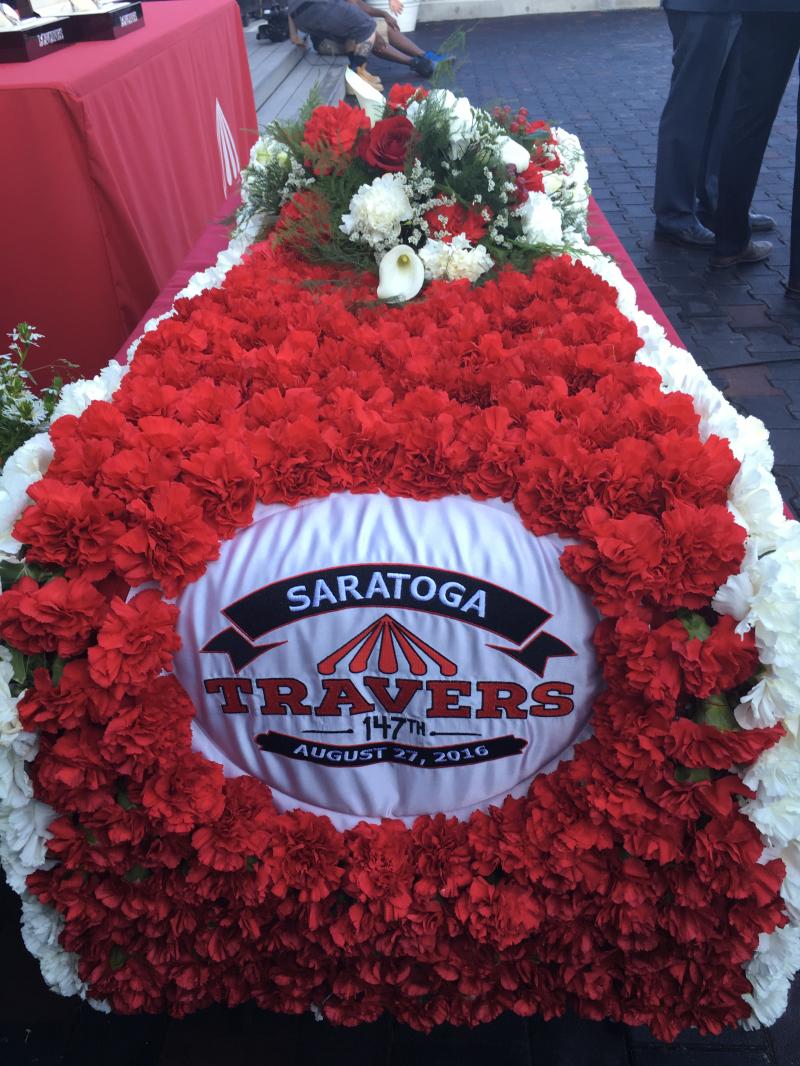 One year after Triple Crown champion American Pharoah was upset in the Travers (G1), Hall of Fame trainer Bob Baffert returned to Saratoga on Saturday and conquered the “Midsummer Derby” – with a secret weapon named Arrogate.

I say “secret weapon” because Arrogate entered the Travers with only four starts under his belt, none in a stakes race, none outside California, or beyond 1 1/16 miles. Although the gray son of Unbridled’s Song was highly regarded, who could be certain how he’d handle the culture shock of this 1 1/4-mile examination, against top company, on the other side of the country?

But as it turned out, the 11-1 Arrogate was the one delivering the shock to his accomplished rivals, including Preakness (G1)/Haskell (G1) winner Exaggerator and Belmont (G1) hero Creator.

Under Hall of Fame rider Mike Smith, Arrogate flashed speed from his rail post and grabbed the lead through an opening quarter in :23.23. With stablemate American Freedom as well as Laoban prompting him, Arrogate was rattling off demanding fractions for this distance -- :46.84 for the half and 1:10.85 for six furlongs.

Surely that was too fast, especially for such an inexperienced horse taking on the big guns for the first time.

Turning for home, Arrogate began to open up on the field at the mile mark in 1:35.52. Instead of tiring, he was gaining steam!

That’s exactly what Baffert hoped would happen as he watched the race unfold.

“Once Mike is on a horse like that, he doesn't take away their speed from them,” the trainer said. “But like I said, turning for home, I sat back, and I just thought, wow, he is just -- what I was hoping he was like, and I knew there was no way they were going to catch him. He was just getting in gear.”

Arrogate pounded his final quarter in :23.84, propelling himself farther and farther ahead with every raking stride, until crossing the wire 13 1/2 lengths in front. That’s the third-biggest margin of victory in the history of the Travers, dating back to 1864.

And Arrogate’s final time, an eye-popping 1:59.36, obliterated the track record of 2:00 held by General Assembly since the 1979 Travers. In the process, Arrogate recorded an amazing 124 BRIS Speed rating.

In fewer than two minutes, Arrogate crashed the divisional party and thrashed the form of this year’s Triple Crown. Sure, Kentucky Derby (G1) champion Nyquist wasn’t there as he continues his summer holiday, but his frequent foes were annihilated by Arrogate.

Creator and Destin, the one-two finishers in the Belmont, could do no better than seventh and ninth in the Travers. Exaggerator fared even worse in 11th of 13, validating his critics’ view of him as a mudlark who’s not as effective on a fast track. This was a costly loss for Exaggerator, casting him down from his short-lived status as divisional leader.

The burning question now is whether Arrogate can wrest the three-year-old title with probably just one start remaining in 2016 – a tilt at the Breeders’ Cup Classic (G1) at Santa Anita November 5. That’s the decisive showdown with Nyquist, with a championship on the line. They’ll also have to deal with California Chrome, the 2014 Kentucky Derby winner and now the nation’s leading older male.

Although most champions in the three-year-old male division are veterans of the Triple Crown trail, there is precedent for a late-developing colt like Arrogate to jump up later in the season and dethrone the establishment. That happened in 2000 with Tiznow, who didn’t break his maiden until the end of May, but ended up taking Horse of the Year honors with successive wins in the Super Derby (G1), Goodwood (G2), and Breeders’ Cup Classic.

Like Tiznow, Arrogate didn’t even begin his racing career until April, when he finished third in his six-furlong debut at Los Alamitos. Baffert explained that he just needed the time to come to hand. That patient approach is always welcomed by his owner, Juddmonte Farms’ Prince Khalid Abdullah.

“He was a really big horse,” Baffert said. “That's one thing about the organization, which is take your time. Just let him develop on his own. He's big. As you see, he's a big lanky horse. He might have had maybe like some baby issues, shin, nothing really serious. So we just let him come on his own. And finally, we brought him in, and like my assistant said, boy, this horse is ready to come over. So we started working.

“But he was tough. He was wanting to get a little hot, and his first race proved that. He was a mess his first race. It was almost like American Pharaoh [in his debut loss as a two-year-old at Del Mar], had the blinkers on, got away from the pony, wanted to run. He was just a mess that day. Got him back. Got him relaxed.

“Then all of a sudden, Dana Barnes, who gets on him every day, just really spent a lot of time with him. He's like a big kid. We just try to stay out of his way, and he responded.”

Arrogate learned from that debut experience and graduated next time over 1 1/16 miles at Santa Anita June 5. He promptly followed up with a pair of allowance wins. Baffert had the confidence to try him at the lofty Grade 1 level on Saturday, and Arrogate rewarded him with a performance that will live long in the memory.

“What he did today is pretty incredible,” Baffert said. “He looks like a superstar in the making. So I think the fans, they'll remember watching a horse like this because I know, when I see performances like this, very rare.

“I think that, what he did today, he deserves a little break. For now I would say, he's a big gangly -- he's getting better. For this horse, I knew he's going to get better as he gets older. It's too bad we didn't have him ready for the classics, but that's just the way it worked out.”

Arrogate was bred by Clearsky Farms in Kentucky and sold for $560,000 as a yearling at Keeneland September. Thus he came to carry the famed Juddmonte colors, sported by such all-time European greats as Dancing Brave and Frankel.

Although best known for turf performers, Juddmonte has campaigned several major U.S. dirt runners. Chief among them was 2003 Belmont winner Empire Maker (the paternal grandsire of American Pharoah). But Arrogate could end up being the best of Juddmonte’s flagbearers on the dirt.

As Baffert summed it up, “I mean, the sky's the limit for this horse.” 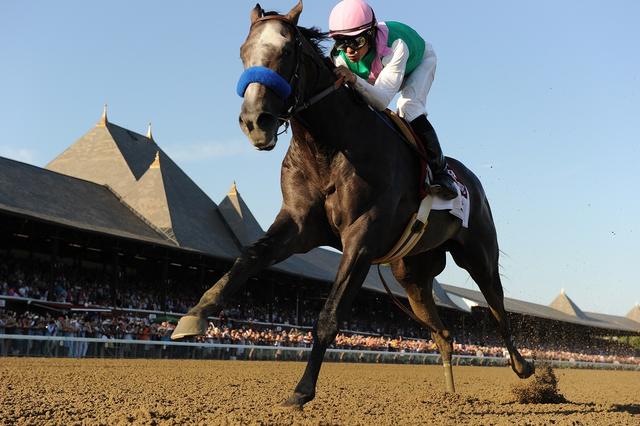