Arrogate delivered another monstrous performance in the inaugural running of the $12 million Pegasus World Cup (G1) at Gulfstream Park, accelerating to the lead on the far turn and rolling to a convincing 4 ¾-length tally in the world’s richest race. Trained by Bob Baffert, Mike Smith rides the 2016 champion 3-year-old male.

The powerful gray colt has now won six straight for owner Juddmonte Farms since dropping his career debut last April, registering 124 and 115 BRIS Speed ratings for outstanding wins in the Travers (G1) and Breeders’ Cup Classic (G1) in advance of the Pegasus. By Unbridled’s Song, Arrogate became the first divisional champ since Tiznow (2000) to miss the Triple Crown.

He finished second to California Chrome in Horse of the Year voting but was named Longines’ World’s Best Racehorse for 2016.

Two-time Horse of the Year California Chrome, the 2014 Kentucky Derby (G1) and Preakness (G1) winner, was forced wide into the first turn after failing to break alertly from post 12 and traveled in tandem during the early stages with Arrogate, who was down on the inside racing up close behind pacesetter Noble Bird after breaking from the innermost post.

Noble Bird reeled off early splits in :23.46 and :46.14 while being chased by Neolithic on the outside. Arrogate began to leave California Chrome behind rounding the far turn and moved three wide to strike the front after 6-furlongs in 1:09.80. He entered the stretch full of run, striding clear with commanding ease as he reached the mile mark in 1:33.90.

“Once I got out going into the far turn I knew we were going to be very tough to beat,” Smith said. “He had a lot of run today and I was very happy. As far as winning the world's richest race, I'm absolutely numb.”

Smith geared down Arrogate in the final furlong, finishing 1 1/8 miles in an excellent 1:47.61.

“He broke well, as well as he could,” Baffert said. “He just ran his race. I kept waiting for the matchup with Chrome, but he just didn't bring his race today. It's too bad.”

Arrogate was favored at 4-5 among 12 runners. California Chrome failed to fire his best effort, weakening to ninth, 29 ½ lengths back of the winner as the 6-5 second choice. Trainer Art Sherman said the chestnut was off in his right front leg after returning to the barn and x-rays will be taken. Runner-up in the Breeders’ Cup Classic, California Chrome retires with more than $14.5 million in earnings.

Shaman Ghost, one of two entrants with a victory at Gulfstream in advance of the Pegasus, rallied to be a clear second at 19-1. Neolithic, who had also won over the track, finished another 3 ½ lengths back in third at 23-1 and Keen Ice closed belatedly to be a non-threatening fourth as the 16-1 third choice.

With the $7 million winner’s share, Arrogate has earned $11,084,600 from a 7-6-0-1 record. He offered a remarkable performance when making his stakes debut in the August 27 Travers (G1) at Saratoga, scoring by 13 ½ lengths as he established a new 1 ¼-mile track in 1:59.36. Bred in Kentucky by Clearsky Farms, Arrogate sold for $560,000 as a Keeneland September yearling and is out of the Distorted Humor mare Bubbler. 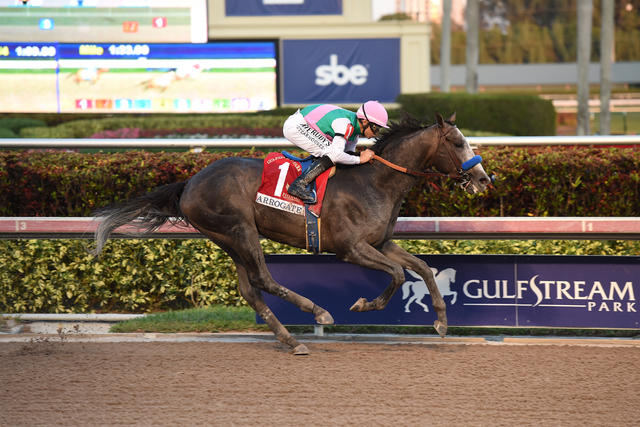