Authentic a green but decisive winner of the Sham

Authentic proved the real deal in Saturday's $100,500 Sham (G3) at Santa Anita, scoring a convincing victory in the mile Road to the Kentucky Derby series prep for Hall of Fame trainer Bob Baffert.

Making his stakes debut off a 5 1/2-furlong debut win at Del Mar Nov. 9, Authentic stayed off the inside while setting a comfortable pace of :23.87, :47.94, and 1:12.18. Edging clear from his closest pursuers approaching the quarter pole, the bay turned on the afterburners in the stretch while displaying noticeable greenness under Drayden Van Dyke.

"He was a little bit green that day also at Del Mar and I was debating whether to put blinkers on him," said Baffert, who was winning the Sham for a record sixth time. "He might need something (going forward) to keep a little bit focused."

Owned by the partnership SF Racing, Starlight Racing, Madaket Stables, Frederick Hertrich III, John Fielding, and Goldconda Stables, Authentic won by 7 3/4 lengths and finished up in 1:37.57 over a fast track, paying $4.40 as the 6-5 favorite.

Bred in Kentucky by Peter Blum Thoroughbreds, Authentic was a $350,000 Keeneland September purchase. He's by Into Mischief and out of Flawless, by Mr. Greeley, and has now earned $91,200.

The next Road to the Kentucky prep is the Lecomte (G3) at Fair Grounds in New Orleans on Jan. 18. 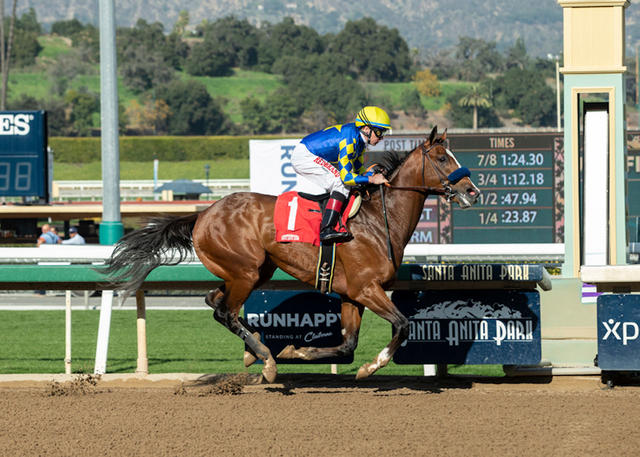