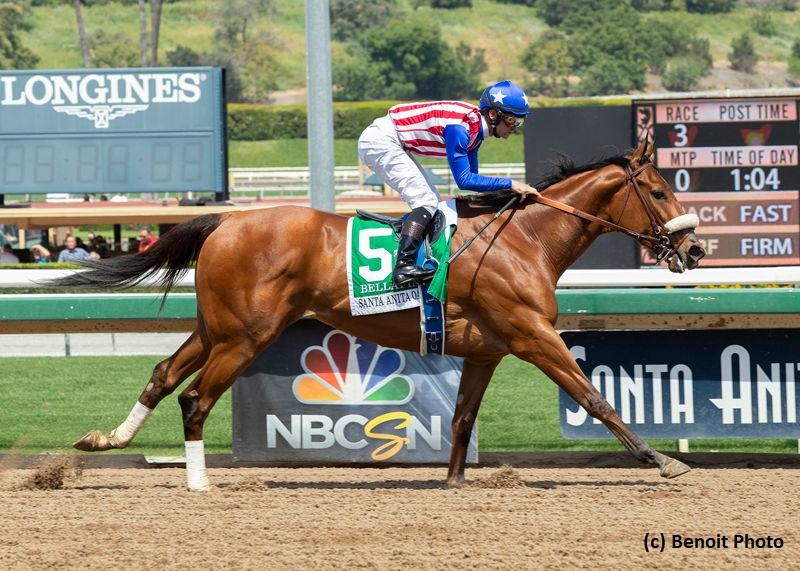 After winning her first two starts of the season on or near the lead, Bellafina successfully reverted to stalk-and-pounce tactics in Saturday's $392,000 Santa Anita Oaks (G1). An authoritative winner, Bellafina now heads to Churchill Downs as the likely favorite in the May 3 Kentucky Oaks (G1).

Facing just three rivals in the 1 1/16-mile Road to the Kentucky Oaks series prep, Bellafina was four wide into the first turn and settled in a three wide position down the backside as the Bob Baffert-trained second choice Chasing Yesterday led through fractions of :24.10 and :47.88. She was overtaken on the far turn by stablemate Flor de La Mar, who advanced along the rail.

Bidding for the leading approaching the turn for home, Bellafina took over from Flor de La Mar in upper stretch and opened up a 5 1/4-length advantage at the wire under Flavien Prat. Owned by Kaleem Shah and trained by Simon Callaghan, Bellafina covered the distance in 1:45.47. She paid $2.60.

"We planned to keep her outside just because we weren't sure what Bob's [Baffert] two were going to do," Callaghan said. "We just wanted to keep her out of trouble, keep a smooth run, and Flavien did a great job."

This was the sixth career stakes win in eight starts for Bellafina, who captured the Sorrento (G2), Del Mar Debutante (G1), and Chandelier (G1) last year prior to running fourth in the Breeders' Cup Juvenile Fillies (G1) at Churchill, a loss attributed to her being in season.

Bellafina preceded this win by a facile score in the Santa Ynez (G2) and a more game victory in the Las Virgenes (G2) two months ago. She's now earned $1,068,000.

An $800,000 Fasig-Tipton two-year-old purchase, Bellafina is by Quality Road and out of the Malibu Moon mare Akron Moon. A full sister to Grade 3-placed stakes winner Diamond Kind, she was bred in Kentucky by JSM Equine. 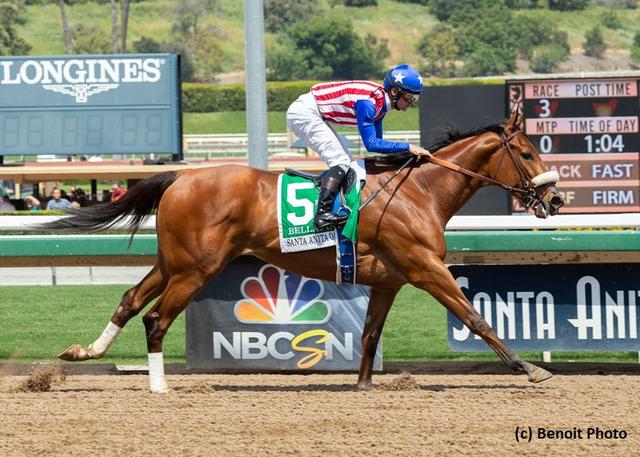