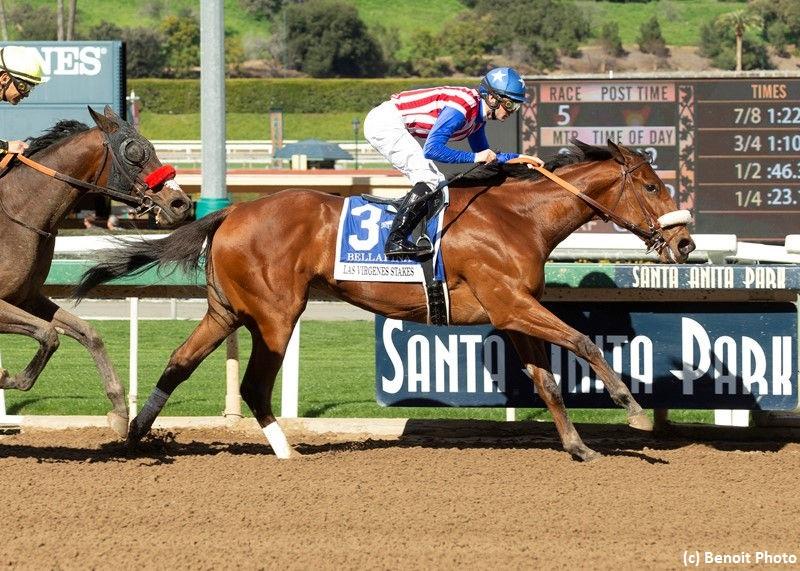 Far from a dominating effort, Bellafina nonetheless improved her record on the year to two-for-two in Saturday's $200,000 Las Virgenes (G2) at Santa Anita, a Road to the Kentucky Oaks series race over one mile.

Taking the lead entering the first turn but under steady pressure most of the way from Mother Mother, Bellafina turned back that rival turning for home and dug in gamely on the run to the wire to hold Enaya Alrabb by three parts of a length. Calf Moon Bay finished 2 3/4 lengths behind in third, with Mother Mother a half-length farther back in fourth.

"She was good, as always," jockey Flavien Prat said. "I thought Mother Mother would show more speed with the blinkers, but it seemed like everybody was waiting and watching me, so I tried to bide my time and wait as long as I could...As soon as she saw that filly (runner-up Enaya Alrabb), she re-engaged."

Owned by Kaleem Shah and trained by Simon Callaghan, Bellafina paid $2.20 after negotiating one lap of the Santa Anita oval in 1:35.99 over a track rated good.

Bellafina has now earned $828,000 from a line of 7-5-1. Second in her debut, she rattled off wins in the Sorrento (G2), Del Mar Debutante (G1), and Chandelier (G1) before finishing fourth as the favorite in the Breeders' Cup Juvenile Fillies (G1), a loss attributed to her being in season. Bellafina opened her season campaign with an 8 1/2-length romp in the Santa Ynez (G2) over seven furlongs on January 6, and is likely to race next in the April 6 Santa Anita Oaks (G1).

Bred in Kentucky by JSM Equine, she was an $800,000 Fasig-Tipton March juvenile purchase. A full sister to multiple stakes winner Diamond King, Bellafina is by Quality Road and out of the stakes-place Akron Moon, by Malibu Moon. 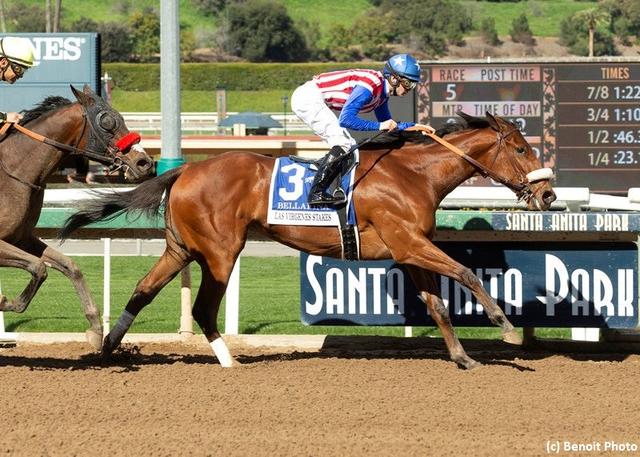