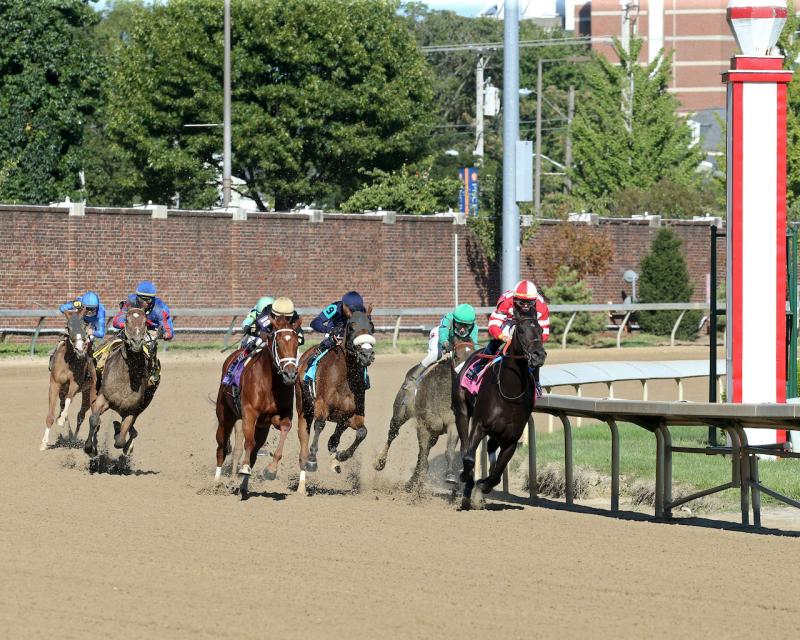 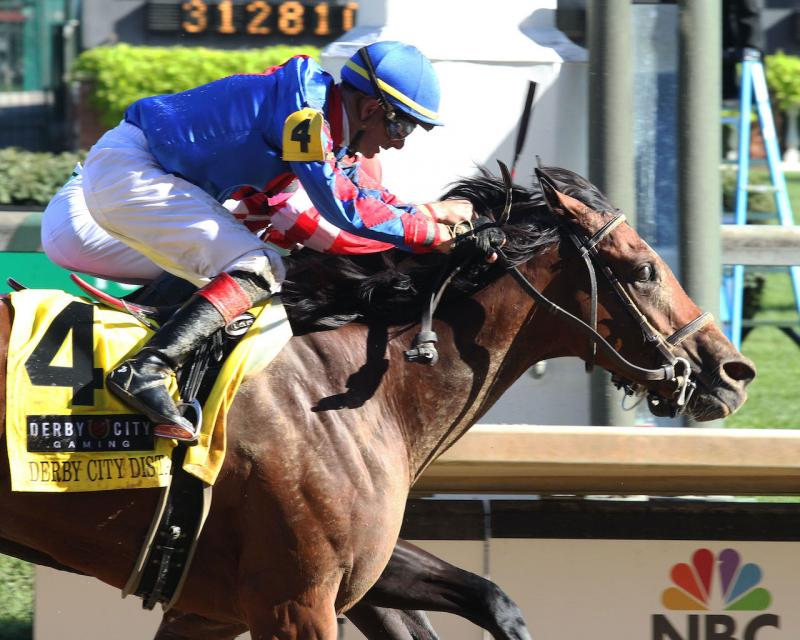 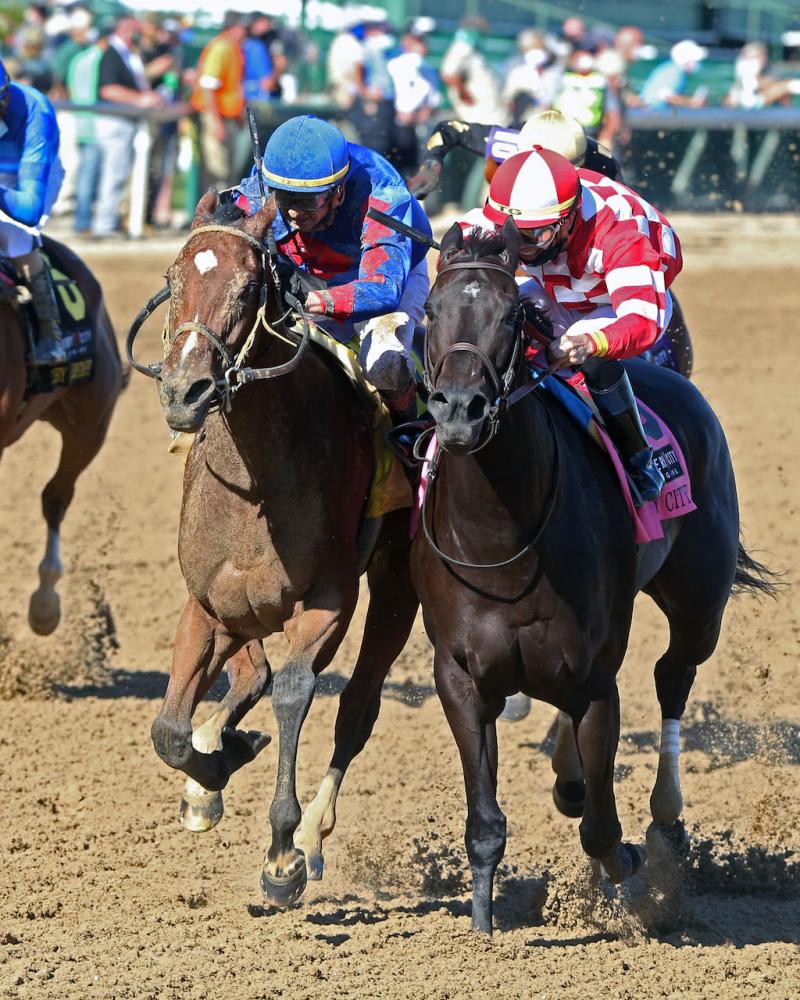 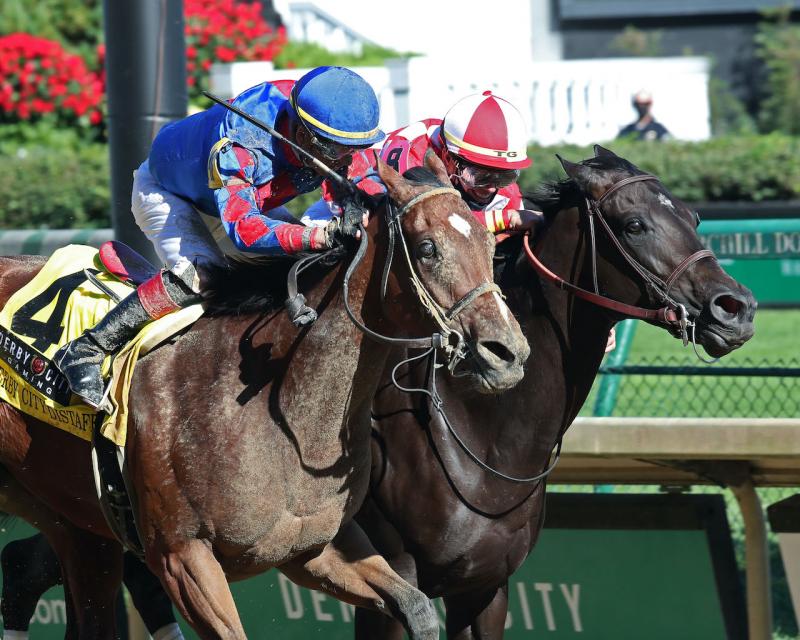 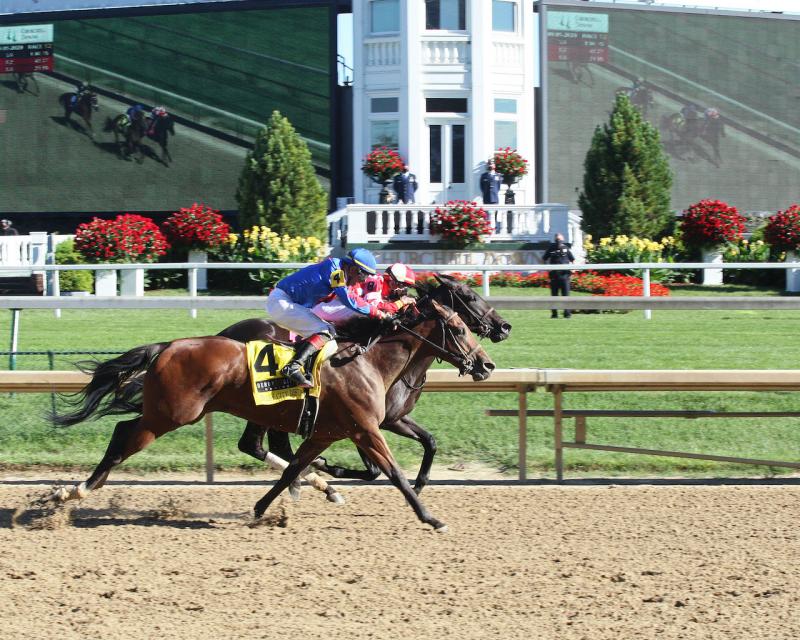 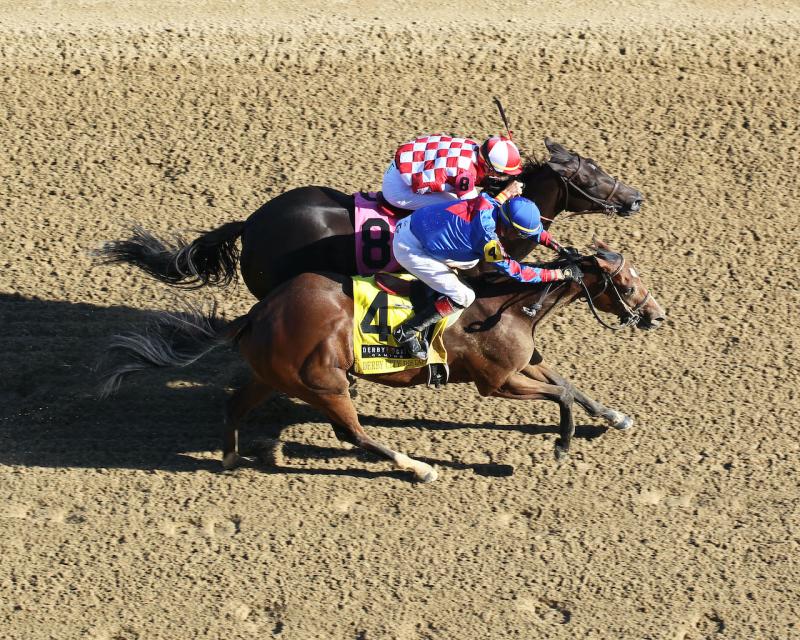 LOUISVILLE, KY (Saturday, Sept. 5, 2020) – Lothenbach Stables’ Bell’s the One got her nose down on the wire just ahead of Serengeti Empress to win the 34th running of the $500,000 Derby City Distaff Presented by Derby City Gaming (GI) for fillies and mares.

Trained by Neil Pessin and ridden by Corey Lanerie, Bell’s the One covered the seven furlongs on a fast main track in 1:21.07. The victory marked the first Grade I victory for Bell’s the One and Pessin.

Serengeti Empress put away Ce Ce at the sixteenth pole but was quickly joined by Bell’s the One who won the race to the finish line.

A 4-year-old Kentucky-bred daughter of Majesticperfection out of the Street Cry (IRE) mare Street Mate, Bell’s the One increased her bankroll to $790,040 with Saturday’s $303,800 check and improved her record to 14-7-2-1.

It was another half-length back to Ce Ce who was followed in order by Wildwood’s Beauty, Bellafina and Shesomajestic.

Corey Lanerie (winning rider, Bell’s the One) – “The race set up just like I thought. I was hoping someone would go with Serengeti Empress. I figured Bellafina would press her and Johnny (Velazquez on Ce Ce) would be sitting third in the catbird seat. I thought she might be hard to get by coming off a 1 1/16-mile race, but my filly has her style. I let her stay back there because I know when I call on her, she has a turn of foot like no tomorrow. When I was three or four lengths behind them, I was pretty confident that I was going to run by them pretty easy, but it wasn’t so easy. Serengeti Empress fought back. I actually thought she had gotten the bob.”

Neil Pessin (winning trainer, Bell’s the One) – “That was an unbelievable horse race. Tom Amoss and I actually joked before the photo came out that we would take a dead heat. This filly had a great trip once again with Corey (Lanerie). He fits this filly so well. She sat behind that really fast pace and was so impressive. I’m so proud of her and so thankful for the owners.”

“I’ve been Grade I-placed but have never had a Grade I winner. I’ve had a bunch of Grade II and Grade III winners. Never a Grade I. I thought I’d gone by her, and then I thought she came back. I wasn’t sure if we’d won, second or dead-heated. It was just too close to call. I knew it was pretty close and I didn’t know who won.”

“I was happy whether we’d won or lost. Maybe now she’ll get a little respect, because she’s never gotten it any time she’s run. She tries hard every time. The only times she’s ever gotten beat, it was my fault. Not hers.”

On Breeders’ Cup F&M Sprint: “I think you have to. I think that’s your only choice. That will be her next race. We gave her two months between her last race and this one and it’s another two months to the Breeders’ Cup. She does well with the spacing. It sets up good for her and she’s won before at seven-eighths at Keeneland in the Grade II Raven Run.”

Tyler Gaffalione (rider, Serengeti Empress, second) – (Talking to owner Dr. Joel Politi and his family after Serengeti Empress’ head-bob defeat): “That was a tough one. I’m so sorry guys. It was a great effort. I feel terrible. I really wish I could have gotten it done for you guys. She kept fighting.”

At the wire: “It was tight. When you’re battling down the lane like that —  head bob, head bob — you don’t really know. You just hope for the best. It just wasn’t our day. She goes out there and she does her thing and just keeps fighting. She’s a tremendous filly. I’m so happy I got to ride her. They got her today, hopefully we can get them next time.”

Tom Amoss (trainer, Serengeti Empress, second) -- “I think the major players attacked us early, earlier than they would have ordinarily done in a race but they knew that she was the speed. That made it really difficult on her and when you’re laying back and just picking up the pieces and everyone else is doing the dirty work, that can work to your advantage. It was a great horse race and the winner ran great. Make no mistake about it, I couldn’t be more proud of my girl. We didn’t get it today but she ran her heart out and we’ll get one more chance in November (in the Breeders’ Cup) at Keeneland.”