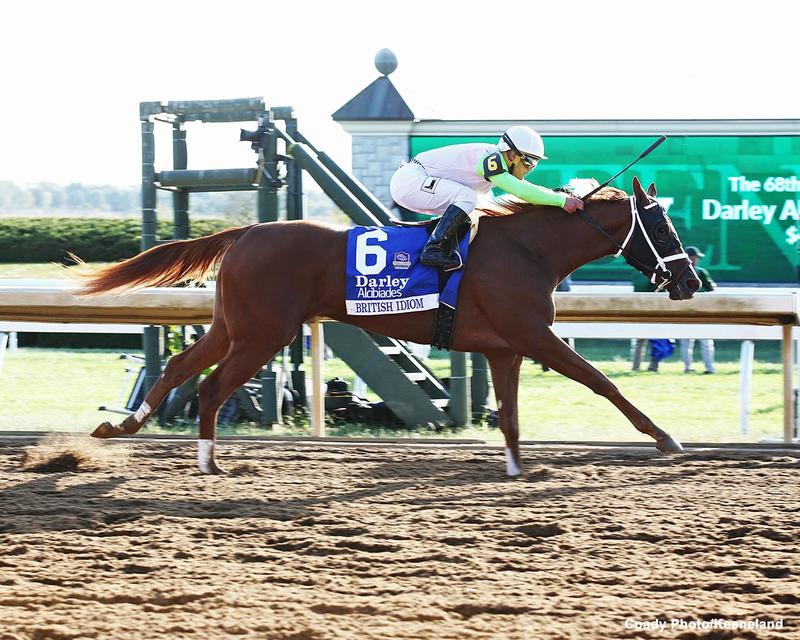 Friday’s $400,000 Alcibiades (G1) at Keeneland shaped up as a clash among three notable winners from Saratoga, but British Idiom turned it into a one-filly show.

British Idiom, the 7-2 third choice, was coming a sharp debut victory sprinting six furlongs. Unlike 2-1 favorite Alandra and the 5-2 Perfect Alibi, heroine of the Spinaway (G1) and Adirondack (G2), British Idiom didn’t sport as robust a pedigree. That proved a red herring when they settled the issue on the racetrack, and she reached a new high on the stretch-out to 1 1/16 miles.

With Hall of Famer Javier Castellano back aboard, British Idiom secured a perfect stalking trip on the outside. In contrast, Alandra found herself in a tactically difficult position after a troubled start left her at the back of the pack.

Front-running Spitefulness, the longest shot on the board at 64-1, commenced her retreat as the field rounded the far turn. Sequin, who had been her nearest pursuer, briefly took command between calls, but British Idiom was moving menacingly to join her.

Swinging into the stretch, British Idiom was already pulling clear. Perfect Alibi launched her customary rally that this time made no impact. In fact, British Idiom widened her advantage to 6 1/2 lengths at the wire -- the largest margin since the Alcibiades was lengthened to its current distance in 1981. A trio of fillies had posted six-length wins in this span, Lucky Lucky Lucky (1983), Silent Account (1985), and Stellar Cat (1993).

Perfect Alibi garnered 4 Oaks points, and Alandra, who belatedly worked her way into a game third, received 2 points. Alandra bears watching with a clean trip next time. Gone Glimmering raced in proximity to British Idiom on the inside early, and kept on evenly to get 1 point in fourth. Sequin wound up fifth, and Spitefulness tired to seventh in the field of 11.

British Idiom clocked 1:45.80 on the fast track and paid $9.20. Now two-for-two, the chestnut has bankrolled $281,250 for her ownership consortium of Michael Dubb, Stuart Grant’s The Elkstone Group, Madaket Stables, and Bethlehem Stables.

Bred by Hargus and Sandra Sexton and Silver Fern Farm in Kentucky, British Idiom was a bargain $40,000 Fasig-Tipton Kentucky October yearling. She is the first graded winner sired by the young Tapit stallion Flashback, and her dam is the multiple Canadian stakes scorer Rose and Shine, by Mr. Sekiguchi.

British Idiom hails from the family of another Alcibiades winner, Peace and War, who shipped in from Great Britain to spring a 23-1 surprise in 2014. 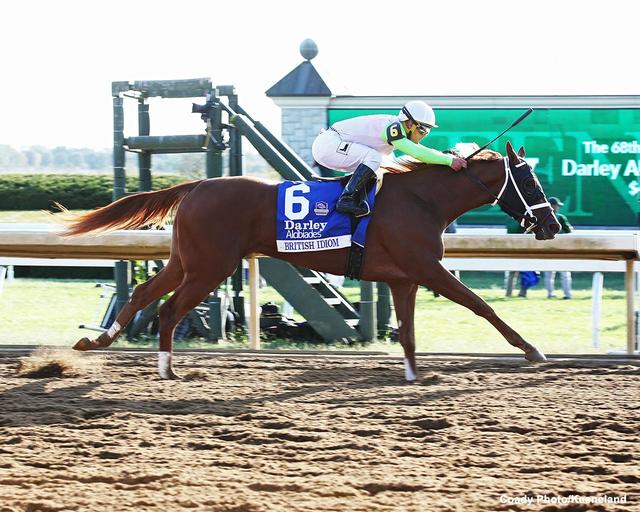