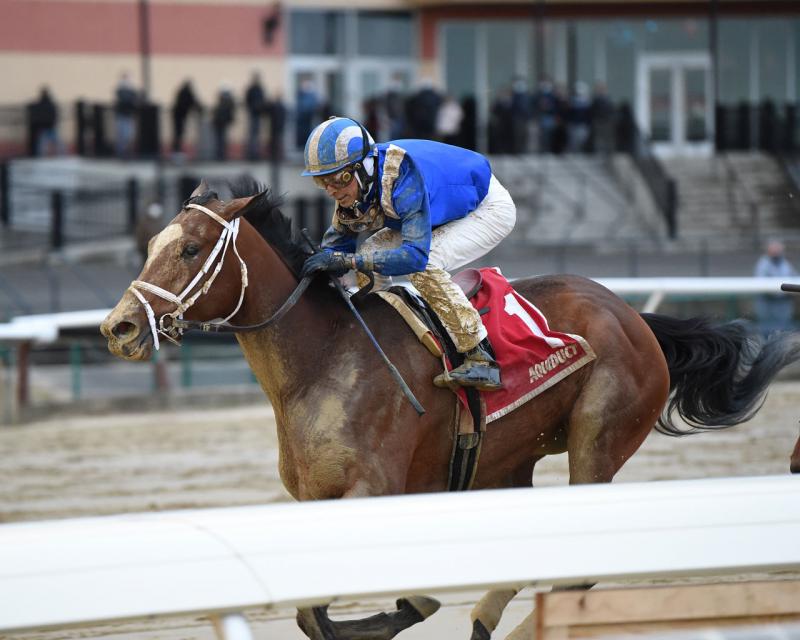 Brooklyn Strong joined the Kentucky Derby picture with an upset win in Saturday’s $150,000 Remsen S. (G2), wearing down favored pacesetter Ten for Ten to post a neck decision over a sloppy Aqueduct track.

The New York-bred gelding stepped up to face open rivals, scoring as the 7-1 fourth choice among five juveniles in the 1 1/8-mile race, and Brooklyn Strong earned 10 points taking the Road to the Kentucky Derby series qualifier. Joel Rosario was up for owner Mark Schwartz and trainer Danny Velazquez.

Later on the program, Malathaat overcame a tough trip to score by three-quarters of a length in the $150,000 Demoiselle (G2), picking up 10 points in the Kentucky Oaks qualifier.

Ten for Ten led by about a couple of lengths through early splits in :23.67, :47.86, and 112.69 in the Remsen. Brooklyn Strong rated a few lengths off the pace in fourth, advanced to second rounding the far turn, and closed boldly into contention while turning for home.

Brooklyn Strong got up in the final strides, stopping the teletimer in 1:50.60.

Ten for Ten didn’t get the job done as the 6-5 favorite, but he held second by 8 3/4 lengths over 9-5 second choice Known Agenda. It was another 8 1/4 lengths to fourth-placer Pickin’ Time, and Erawan completed the order.

Purchased for a bargain $5,000 at the OBS Spring 2-year-old sale, Brooklyn Strong easily defeated $40,000 maiden claiming rivals when making his debut at Delaware Park in mid-September. The son of Wicked Strong faced state-bred stakes foes at Belmont Park in his next two outings, finishing third in the Bertram F. Bongard S. before capturing the Oct. 24 Sleepy Hollow S. by 2 1/4 lengths on Oct. 24.

Brooklyn Strong has now earned $195,000 from a 4-3-0-1 record. Bred by Cheryl Prudhomme and Dr. Michael Gallivan, the bay gelding is out of the stakes-placed Medaglia d’Oro mare Riviera Chic.

In the Demoiselle, Malathaat left the starting gate as the 2-5 favorite following a pair of convincing wins, including a 7 3/4-length romp in the Nov. 6 Tempted S. at Aqueduct. The Todd Pletcher-trained Curlin filly didn’t experience a clean trip while stuck down along the inside during the early stages, and she came under a ride while rounding the far turn.

Millefeuille, the 3-1 second choice, tracked the pace before advancing to the lead entering the far turn, and she entered the stretch with a widening advantage, reaching the mile mark with a three-length edge. Malathaat finally extracted herself from an inside position, angling wide for the stretch drive under John Velazquez, and she rallied boldly through the final furlongs to collar Millefeuille in deep stretch.

Malibu Curl was another 4 1/2 lengths back in third. Café Society, Traffic Lane, and Celestial Cheetah came next under the wire.

Purchased for $1,050,000 at the 2019 Keeneland September sale, Malathaat is out of Grade 1 winner Dreaming of Julia. She was bred by Stonestreet Thoroughbred Holdings LLC, and Malahaat has now earned $172,130 from her 3-for-3 record. 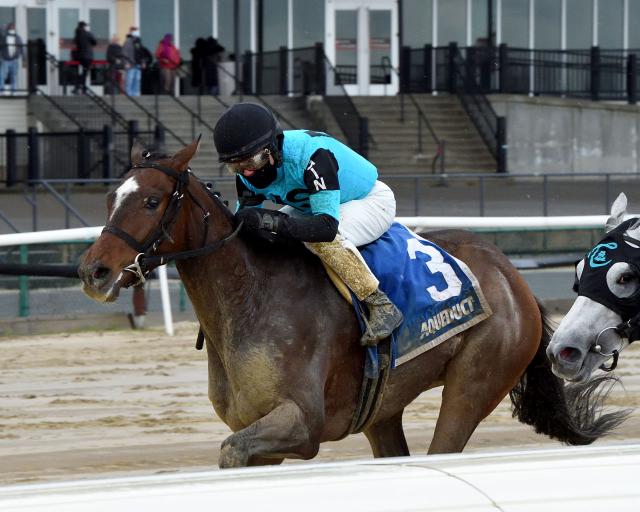