LOUISVILLE, KY (Friday, Sept. 4, 2020) – Allied Racing Stable’s By My Standards forged to the front in upper stretch and pulled away to post a 1 ¾-length victory over Owendale to win the 17th running of the $400,000 Alysheba presented by Sentient Jet (GII) for 4-year-olds and up.

Trained by Bret Calhoun and ridden by Gabriel Saez, By My Standards covered the 1 1/16 miles on a fast track in 1:42.24.

By My Standards tracked a leisurely pace of :25.71 and :49.93 set by Mr Freeze and moved at the leader along with Owendale at the top of the stretch. By My Standards took over quickly, repulsed a bid from Owendale and drew off to notch his fourth Grade II victory.

It was another three-quarters of a length back to defending champion McKinzie with Title Ready and Mr Freeze completing  the order of finish.

Gabriel Saez (winning rider, By My Standards) -- "A little bit out of the gate, I see (Manny) Franco trying to get going (on Mr Freeze). I said, 'OK, he's going to go. I'm going to stay in here close. It was not really fast on the front end, but when it was time to get running around the half-mile pole, he picked up an extra gear. Each time I asked him to give me that acceleration, he did. I was really confident in him today. I was expecting him to run a huge race today, and here we are. I'm glad we got the job done. I'm looking forward to the Breeders' Cup. Fingers crossed and hope for the best."

Bret Calhoun (winning trainer, By My Standards) – “Winning a race like this at Churchill is always special for our entire team. This horse got in some interesting pace scenarios in the last two starts and today Gabe (Saez) gave him the perfect ride and sat a perfect trip the entire way around there. It’s kind of weird to think the Alysheba is a prep for the Breeders’ Cup Classic (GI) but we’re going to go with it and hope to get there in November.”

Brad Cox (trainer, Owendale, second) -- “There was no pace. I didn’t really know what to expect. Going into it, I didn’t think there was going to be much pace on paper and then obviously there was none. I am finding out about this horse … that he doesn’t really like kickback. He likes being out in the clear. He’ll run, but he’s not going to take it over the span of 5-6 furlongs and then expect to run on. He ran good, I was proud of the effort. He was beaten by a very, very good horse here. After the last race here (fifth in the Grade II Stephen Foster on June 27), I was kind of wondering where we belong in the handicap division and he put himself back in the mix. Very pleased, I was glad he got it turned around. Just his third race this year so hopefully we’ll see what happens coming out of this.”

Adam Beschizza (rider, Silver Dust, third) – “He ran his usual solid performance. I’m delighted for Bret (Calhoun). He’s been looking for redemption for a while with that horse (By My Standards). Silver Dust (also trained by Calhoun) is always knocking on the door. He always brings home a check. I’m sure his day is right around the corner.” 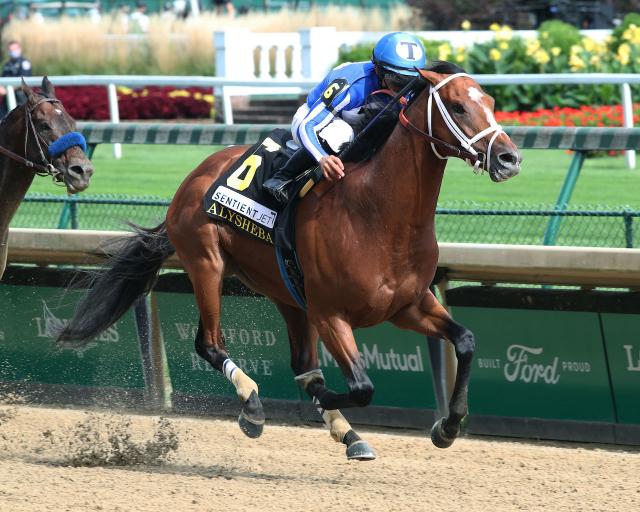