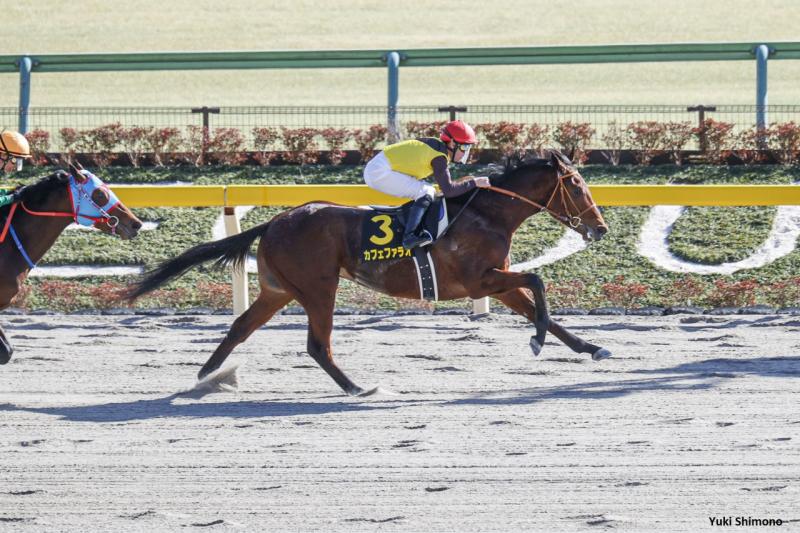 Hot favorite Cafe Pharoah extended his record to a perfect 2-for-2 in Sunday’s Hyacinth S . at Tokyo, taking over the top spot on the Japan Road to the Kentucky Derby with 30 points. But the American Pharoah colt accomplished the objective in an unexpected manner – from far off the pace.

In his Dec. 14 unveiling at Nakayama, Cafe Pharoah went straight to the lead and widened his margin to 10 lengths. In the Hyacinth, the Noriyuki Hori pupil was nowhere to be found early after a slow start that left him last of the 14-horse field.

Meanwhile, longshot Ultramarine set the pace tracked by Meisho Tensui, and the pair battled to upper stretch before succumbing. Godolphin’s stalking Longonot ranged up to overtake them, but Cafe Pharoah was already joining the fray.

Under confident handling by Mirco Demuro, Cafe Pharoah had advanced out wide on the far turn and asserted himself smoothly in midstretch. The rallying Tagano Beauty tried to pose a challenge, but Cafe Pharoah held sway by a comfortable 1 1/4 lengths. Demuro had him well in hand in a final time of 1:37.7 for the metric mile.

Tagano Beauty banked 12 points on the Japan Road leaderboard. Yaugau got up for third, earning 6 points, as Longonot settled for the 3 points in fourth. Like Cafe Pharoah, those three are Triple Crown-nominated.

Cafe Pharoah was bred by Paul Pompa, perhaps best remembered for his role in the ownership of 2008 Derby and Preakness (G1) star Big Brown. The future champion made his debut in Pompa’s silks before IEAH and other partners came on board.

Pompa acquired Cafe Pharoah’s dam, the classy turf performer Mary’s Follies, following her victory in the 2009 Boiling Springs (G3). She went on to capture that fall’s Mrs. Revere (G2). The daughter of More Than Ready has become a successful broodmare, producing multiple Grade 3 scorer Night Prowler (by Giant’s Causeway) and Regal Glory (by Animal Kingdom), who won the Lake George (G3) and dead-heated for the win in the Lake Placid (G2) at Saratoga last summer.

Cafe Pharoah sold for $475,000 as a 2-year-old in training at OBS March. Koichi Nishikawa’s exciting sophomore looks poised to make his mark at a higher level – definitely in Japan, and hopefully stateside.

The Japan Road concludes with the March 28 Fukuryu at Nakayama, worth points on a 40-16-8-4 scale to the top four. Then we’ll discover who clinches the Japan Road invitation to Derby 146.